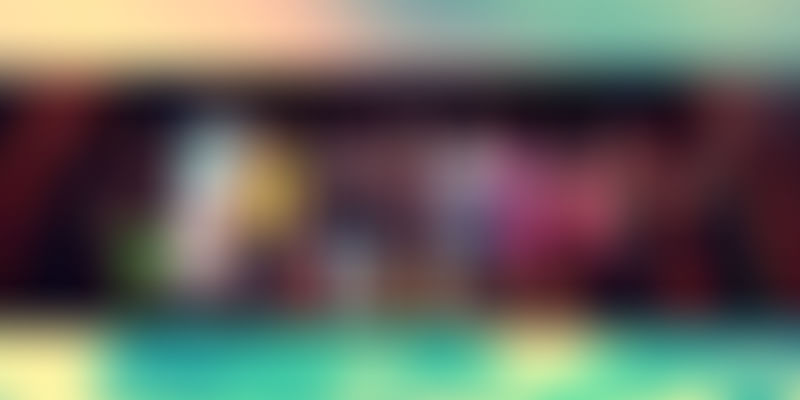 Kranti is a wave surging towards happiness – with its missionaries, the daughters of sex workers in Mumbai’s red-light district –taking their shots at attaining their destinies. As I entered the long hallway in Santacruz East, with walls painted a shade of blue that could perform a Dementor’s kiss on you, I understood that the most optimistic group of people was undergoing crisis. I was right. They were evicted from their original home in Andheri by an insensitive landlord, who, far from helping them, judged them for having the most abstract association with sex work, and attempted to toss them right back into the lives they were trying to escape. And, if you and I don’t intervene, people like him will ensure that a society’s status quo and humanity are concepts that never coincide.

Have you met Robin?

“I was trying to get closure on own violent pastby healing the present and the future of these girls.”

Afterall, being raised in a violent home with a schizophrenic mother and realizing at the age of 14 that she was a lesbian couldn’t have been the ingredients of a normal childhood. Every single chance she got, Robin wanted to run away from her home and her country.

“I volunteered all over the world before I came to India. I was looking to forgive my past.When I met Bani Das, who was working with the daughters of sex workers in Kamathipura, Mumbai’s red-light district, I realized that there was so much more depth to their problems – having facedsexual abuse, abandonment,and yet, no spaces to really heal them completely. Here, the girls were simply asked to bury their past and move on.”

The pursuit of happiness

Robin decided to start Kranti when she saw how little girls residing in the red-light district were asked to live their lives – with a “Don’t ask, Don’t tell” policy about their own mothers and their situations.

“For starters, I needed these girls to know about all the sacrifices their mother had made to be able to give them this life. We taught them to use the word sex work, and not prostitution – asthat was their profession, and it deserved respect and recognition. We are strong advocates of the legalization of sex work – helping to get documents made, getting registered. Their daughters need to know about their own backgrounds and be at peace with them.”

The reason behind starting Kranti, she says, has a “right answer” and a “real answer.” The right answer was to create a secure space for the girls from the red light district and to empower them to be agents of social change.

The real answer, however, is that even more than being a social change agent, she just wanted to lead them to simple unabashed happiness, and help them get through life “without killing themselves.”

Healing their past, helping them to secure their future, and providingthem with what she never had, also happened to be Robin’s way of getting closure on her own past.

Bringing out the Kranti in the girls

Most NGOs in the sphere take in really young girls, but no one wants to shelter girls with complex and real problems. Kranti is a home forteenagers who come with psychologically scarring backstories, deep running issues, boyfriend trouble, etc.– the raw deal.

With their youngest being12 years old, and their oldest, a beautifully turned out 21-year-old woman, Robin loves what she calls a “permanent sleep-over.”

“Certain ages like 14, 18, 20…are awesome ages to get involved. These girls have enough shaping experiences in their past and enough intelligence and maturity in their present to channelize it all into bringing about social change,” explains Robin.

There are NGOs that turn girls out during the middle of the night for minor defaults like talking to boys or having rules. Kranti, which is a more liberal place, is happy to take them in.

Fully aware that almost all of her 18 cubs have undergone traumatizing experiences in their past – each of them having been sexually assaulted at young ages, often by their own families – having an hour of therapy and meditation every week, Robin feels, is a must.

And this therapy is a lot more than just talking to an expert. She encourages different types of therapy, such as music, dance, theatre, writing journals, etc., anything that a girl admits feels therapeutic to her.

One of their girls has an exceptionally hard time closing her eyes during meditation, as her past comes screaming back to her. Although she prefers not to say a word, she pours her heart out in her journal. Another girl, back when she was little, was kept in the dark about her mother’s death for over 3 weeks. She has immense trust issues and had trouble opening up, but therapy brought her out of the abyss and showed her that the world also has good people.

“They’ve all been lied to, abused, and betrayed. It took them time– some little, and others, a lot more –to forgive, trust, take chances, and love again.”

“The education in our country has all the wrong approaches and priorities.Essentially, they are just training you to make money. Education must be about helping one find what their passion is in life. Krantischool is structured to help one get to know themselves best.”

Kranti School is a Madhouse, but with great teaching methods.

Every morning, a 3-hour session for all the girls, or ‘Kranti School’, takes place at their home. Everyday has a different theme. Monday is music day – where bands like NSPA come down to interact with the girls. Tuesday is TED day – where the girls are exposed to the best international TED Talks. Wednesday is world day– which entails world history and geography, and maybe how the life of a Jamaican is tied in with theirs in some way. Thursday is thinking day – where the forum is open to any organization to come down and teach a professional skill. Friday is field trip day – everything from religious places, caves to NGOs, learn about history and culture, etc. Saturday and Sunday school are punishments for all those who haven’t done school well duringthe week. This model has indeed helped the girls find their true callings. Even though they all go to a normal school, Kranti has put them on the path of self-discovery.

“When I look at one of my 17 year olds,who isa slacker at school, but is laughing 24 hours a day andis giving other people so much positivity and pleasure, I feel, that she couldn’t have been appreciated anywhere else but at Kranti,” says Robin

“Another girl who wasn’t educated and could not speak English or Hindi when she came in– has found that her one true love is the drums. Although every academy in India turned her down, because of lack of qualificationsand maybe because she could not speakEnglish, all four foreign schools we applied to accepted her readily,”Robin rejoices, recalling that story.

A lot of other NGOs tend to herd their bunch of young girls, homogenize them, and prescribe to them that same checklist for living a standard definition of a fulfilled life.

However, individuality is one of the biggest virtues celebrated at Kranti, extracurricular activities play a crucial role. Every girl is required to pick two activities of her choice and explore them avidly.

Theatre also forms a big part of what they do. Their Lal Batti Express with the play “Kamathipura ki Zindagi” written and directed by Robin and the girls, was their call for attention and action to the world. Robin is a strong advocate of theatre, and its ability to help one emote and express.

“We want to tell them their life stories are worth something,” says Robin.

Besides that, a big part of normalizing the circumstances around their lives is by bringing them in contact with the world, and the world in contact with them. Seminars, workshops, documentary screenings on issues such ascaste, class, religion, environment, gender/sexuality and women’s rights have been conducted by them for over 25,000 people at schools, companies, and NGOs.

“My aim is to make a regular person go, ‘Wait a minute, this girl is 14, she sings, loves paani puri, and likes reading – that’s exactly like my 14 year old!’” explains Robin.

Cut now to the present, there is three and a half lakhs a month worth of expenditures to meet and a deposit of 5 lakhs that the Andheri landlord has fraudulently withheld, not to mention turning them out with the parting remark – “Agar mujhe pata hota toh main kadam bhi nahi rakhne deta.”

However, 99 nos later, one yes finally turned up, as this man in Santacruz was kind enough to lease his space out to Kranti. Robin is now trying hard to raise the deposit of 5 lakhs that they lost, to be able to retain this house, through crowdfunding, which is how they have been funding their activities all these years. Chip in, we say.

Robin’s faith in Mumbai hasn’t wavered. “Every city has an underbelly. But here, I’m always shocked at who ends up understanding us. Even at Andheri, it wasn’t the poor people who threw us out, but the rich and educated ones who had an image to maintain,”says Robin

As another income generation program, Robin and her revolutionaries speak at schools and corporates for a fees, and are also planning to replicate the Kranti School model at a higher level with more students from red-light areas.

Even in the wake of tribulations, stories like that of Shweta Katti, an alumnus of Kranti, keep her going. Katti, a university student in New York, is the first girl from an Indian red-light area ever to study abroad – named the 25 Under-25 Young Women to Watch, she even won theUN Youth Courage Awardfor her work with marginalizedgirls.

I met her best friend Kavita. The two girls share the strongest of bonds over the most unlikely reason – having the same biological father. She’s given freedom to take a gap year so she can pursue her dream of being a musician, and she explains how Kranti made her appreciate her roots and background and sent her with a scholarship on the “Semester at Sea.”

“It is not the red-light area that is unsafe, but the people who came into it,” she concludes, of her home.