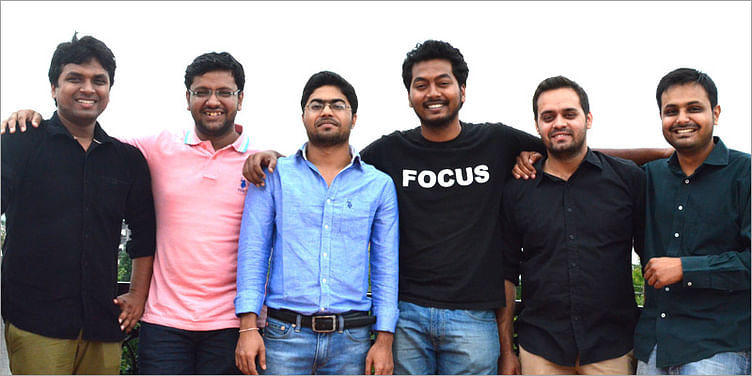 With the increasing usage of smartphones and the convenience of shopping online, the delivery of daily essential products within minutes has become the need of the hour. Here comes the role of hyperlocal logistics startups which deliver everything at one’s doorstep, starting from grocery, medicines to electronic products, thereby giving local kirana stores a platform to tap a larger chunk of customers.

Founded by Mayank Kumar and Lokesh Jangid, Opinio is a tech-enabled hyperlocal logistics startup which helps small businesses (merchants) - restaurants, grocery stores, bakeries and laundry stores - fulfill their demand by offering delivery as a service. Every merchant is given an Opinio Merchant App, which enables them to call a ‘Ground Pilot’ (delivery boys at Opinio). The pilot receives a notification on his Pilot App (every pilot has an Android phone with a preloaded app on it), accepts the order, picks it up from the merchant’s place and delivers it to the customers.

Customers who are expecting a package from our merchants receive a tracking link via SMS after the ground pilot picks up the package. With this link, customers can track their deliveries in real time rather than having to repeatedly check with the merchants.

Both Mayank and Lokesh developed entrepreneurial skills during college days when they built three to four apps that helped people go about their daily lives. Additionally, they have also built software to play music or video file on one’s computer from any device without having to transfer the file. According to Mayank, those entrepreneurial activities were just experiments and were never meant to morph into companies. They, instead, helped bolster their passion to become entrepreneurs.

Tying up with merchants

The startup has tied up with around 500 merchants in 15 areas in Bengaluru and three areas in Delhi. Mayank gives credit to the technology team which has understood the psychology and need of the user very well and has helped create an easy-to-use product. The startup charges merchants on a per-order basis.

We don't charge anything on app downloads. We charge on a distance-based pricing model. For example: Rs 40 per order for 4.5 km and if it exceeds 4.5 km, the charges would be Rs 40 per order plus Rs 10 per km. We have grown by five times since the last month.

Currently, the app has around 700 pilots in its fleet. In a bid to empower the pilots, the startup holds 10-hour long comprehensive training sessions in its offices to impart knowledge on technology, behaviour, morality, ethics and more.

Customers can place orders to the merchant by phone calls or demand aggregators like Foodpanda, Zomato, Justeat, Tinyowl etc. Some merchants charge their customers for delivery and some don't; it is completely up to the merchants.

Opinio is part of Moonshots Internet Private Limited which was incorporated on December 16, 2014. The startup has signed non-disclosure agreements with some of the merchants. Mayank believes the company will become the number one player in the hyperlocal logistics space in the next three months.

Started getting attention from VCs

Opinio has built a workforce of over 100 employees since inception, comprising ten key members representing various departments. It has managed to raise USD 1.3 million from Accel Partners and Tracxn Labs. Mayank says, “Accel has played a role of a wise mentor for us in every situation be it hiring, operations, business model etc.”

With the digital revolution, consumers today demand seamless shopping experience. According to an Assocham-PwC report, about 40 million consumers purchased goods online in 2014 and the number is expected to grow to 65 million this year.

The changing consumer behavior in the last couple of years has sky-rocketed the demand for hyperlocal delivery in India. The potential growth in this space has seen a host of startups cracking the business model and drawing the attention of investors. As earlier reported by YourStory, hyperlocal startups have raised over USD 200-million risk capital over the past 10 months.

With hyperlocal buzz drumming up everywhere, it seems to be a wait-and-watch moment for Opinio.