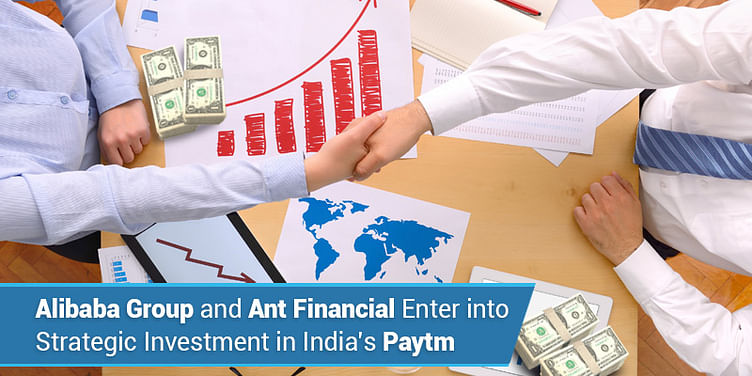 According to YourStory sources, Ant Financial was supposed to pump in $575 million in One97 Communication across two tranches. The Noida-based company had raised $200 million in March this year in the first tranche and met the targets for the second one.

This time, Paytm put up a requirement of a bigger tranche and Alibaba Group agreed to pump in $500 million instead of $375 million. After this transaction, Alibaba becomes the largest stakeholder in One97 Communication. It holds about 40 per cent stake in the company.

The new tranche will help Paytm achieve scale and develop its vibrant mobile commerce and payment ecosystem in India and invest in marketing, technology, and talent.

Paytm had crossed 100 million wallet users in July this year and claims to have a GMV run rate of Rs 10,000 crore. The company had also attracted a round from Ratan Tata and plans to onboard one million sellers by 2016.

Vijay Shekhar Sharma, Founder and CEO of Paytm, said, “Paytm is building India's most dominant mobile payment and commerce ecosystem. With the Alibaba and Ant Financial partnerships, we look to bring half a billion Indians to the mainstream economy and help millions of small businesses leverage this large m-commerce opportunity. This investment by Alibaba and Ant Financial is a reaffirmation of their belief and commitment to the long term Paytm opportunity.”

With this, Alibaba has become the official investor in Paytm and this round will help Paytm accelerate scale and compete with unicorns like Flipkart, Snapdeal, Amazon, and Shopclues. Paytm is doing a host of new things like banking, building a marketplace for movie tickets and distributing financial services (insurance premium etc.).

These new initiatives require more investments and this tranche will bolster Paytm’s confidence in a big way. Also with this tranche, Paytm's early investor SAIF Partners has slipped to the second stakeholder position in the company. The battle for the digital commerce crown among Flipkart, Snapdeal, and Paytm seems to have intensified and it would be exciting to witness this competition in the coming months.