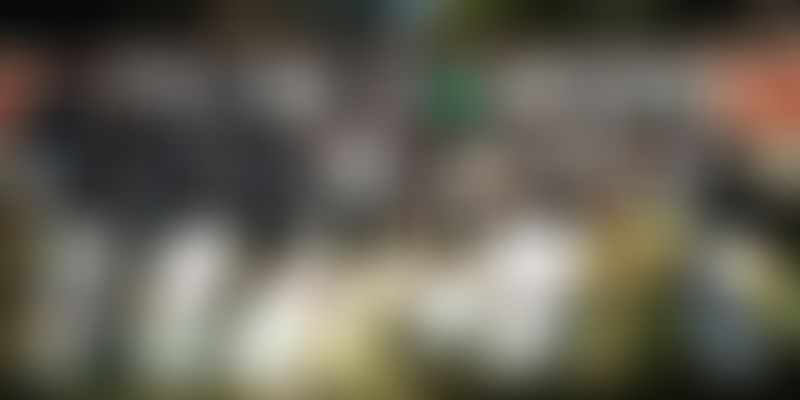 It was in December 2008 that Jodie Underhill for the first time arrived in India. And the first thing that hit her was the festering garbage in the financial capital of the country. She says that she found Mumbai to be so dirty that she wanted to get out, but wherever she went it was the same problem. “People were just throwing their garbage in broad daylight and I was shocked that they cared so little about their surroundings’,” says Jodie. Unable to turn her back to this problem, Jodie founded Waste Warriors a non-profit based out of India.

From the age of nine, Jodie has been independent and has always loved the outdoors. Her parents were divorced then and Jodie’s mother was the one who brought her up. Jodie thanks her mother for what she is today. Jodie quit college within three months of joining and went to the British Racing School as she wanted to be a jockey. She says she spent her 20s travelling to different countries never quite sure what she wanted to do with her life.

It was her travels that got Jodie to India. Travelling she says, was possibly one of the best things that’s happened to her. Jodie says, “I was always on a budget and it taught me to live frugally and make my money last. I loved being surrounded by nature and it made me really appreciate the marvel of this planet. That’s how I started picking up garbage on the beaches in Thailand and Mexico; I wanted to take care of Mother Nature. I still can’t understand how human beings can put a man on the moon but are not advanced enough to deal with the waste that they generate.”

Adding to this, Jodie says one of the most frustrating things she hears is – “There’s no point in cleaning a place as it’s only going to get dirty again.”

She adds that the administration still has a backward way of working. Some of the common problems include staff with no equipment, waste swept into piles not picked up, accepted absenteeism on a mass scale, etc. Jodie says that the way waste is managed needs to be revamped and municipalities need to start abiding by the Municipal Solid Waste Rules.

Waste Warriors have tried hard to work with the municipalities but with very little success. She says that in Dharamsala, the president of the municipality threatened to throw their staff in jail for using the waste containers. “We don’t expect thanks for our work, but it is sad that people who do the right thing are bullied,” adds Jodie.

Being a non-Indian and facing language problems, Jodie found that their work was not taken seriously by the government. She says that things would be different if it was a man. Nevertheless, she adds that things are changing though and the team is currently working with some great female students that Jodie believes to be major change-makers in the future.

But the ride hasn’t been easy, Jodie says, she’s had to work hard, and still does. Waste Warriors, she says, isn’t a job it’s a way of life. She says she eats, sleeps, and breathes it. While still an uphill task, Jodie says she is confident that one day it won’t always be so tough. Fundraising is never easy and Jodie has to get used to constantly asking people to donate.

People generally don’t give waste management much importance or value which makes raising funds an ongoing challenge. “I have always believed in leading by example and that’s one of the things that encourages people to join us,” adds Jodie.

Setting up Waste Warriors has taught Jodie that nothing is easy and if you want to do things the honest way it’s even harder. She says that things get done here when you pay someone and the team decided in the beginning that they were never going to be that kind of organisation.

It’s taught Jodie not to trust everyone, she adds that what people say and do are two different things. “I also now know that perseverance is the key and to succeed you must never, ever, give up no matter how frustrated you get. I am grateful to every donor, every volunteer, and person that has got us to where we are today,” says Jodie.

Jodie adds that it really is great to see transformation. The team has even worked with street animals that survive by eating garbage and on April 1, this year, they opened a rescue centre for them.

She says receiving a standing ovation after a talk is pretty exciting as you realise that people do value what you are doing and the positive changes you are trying to make. Jodie adds, “Meeting Aamir Khan was cool, what a lovely guy and he genuinely wants to see India clean too. Anand Mahindra has been a constant source of support and is someone who I really admire. Working with kids and seeing the innocence in their faces is something that really drives me on. All this hard work is ultimately for them so we can leave them a planet worth inhabiting.”

People are much more receptive to the idea of a clean India now. The Prime Minister’s campaign has made more people aware. Youngsters, Jodie adds, appreciate the importance of cleanliness, realise that they contribute to the problem and what they do in their day-to-day lives does actually matter.

However, there are a number of things that people can do. It’s important to start segregating your waste at home, which means keeping your wet waste separate from your other waste. Give your recyclables to a rag picker or sell them if your municipality doesn’t collect waste separately. If there is no waste collection service in your area then campaign for one. Compost your food and garden waste, either in simple composting enclosures, Khamba Pots or Smart Bins.

Jodie says it’s important to stop littering. She adds that one should encourage their friends and family to always use dustbins. Limit the purchases you make of goods in non-recyclable packaging like chips, biscuits, etc. Always carry a shopping bag and say no to plastic carry bags.

“If you see someone littering, pick it up, hand it back with a smile and say ‘I think you’ve dropped something’. People know littering is wrong but need to be reminded,” adds Jodie.

While now there are a handful of organisations working in the field of waste management, Jodie adds there still is a lot more to be done. Jodie says it is a tough industry to work in due to the stigma attached to waste and the fact that more garbage is being generated every day. Jodie adds that it’s also tough to make it financially viable.

In the West the municipalities pay huge amounts of money to private contractors to collect the waste but nearly everyone pays tax so a lot goes into the kitty. Jodie concludes by saying “In India, only three per cent of people pay tax and the money is spent on sweeping instead of making sure the waste doesn’t hit the ground in the first place.”