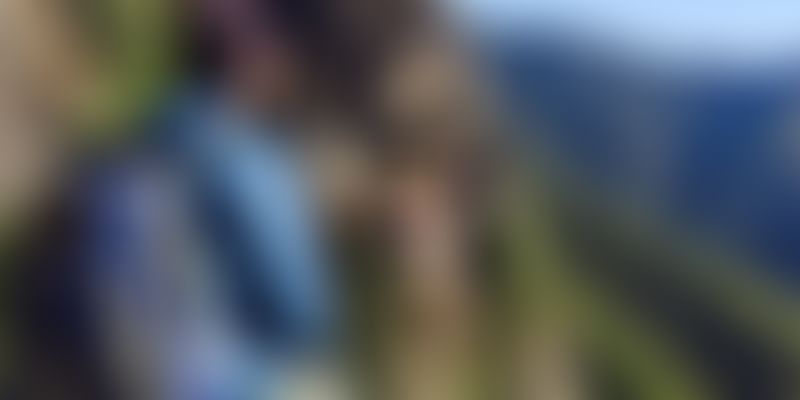 His signature reads ‘Travelpreneur’, and true to that, every time you reach him, he’s in a new state or sometimes even a new country.

Aakash Ranison, (born Aakash Mishra), has cycled over 18,000 km and hitchhiked 48,000 km, visiting over 80 cities across India and Bhutan since he first began his romance with travelling in 2013. He’s also the Founder and CEO of The Golden Bird Foundation, an NGO that strives to provide education to underprivileged children in India.

And that’s not all. He’s been invited by top academic institutions to share the life lessons he’s collected during his travel diaries. He’s also a tech junkie, graphic designer, Red Hat-certified engineer, and a certified ethical hacker who has worked with the cyber department of the Government of Rajasthan.

The trip that made him change his name

Aakash went on a solo cycling trip from Chennai to Bengaluru and at the end of it decided to change his surname. Having never been close to his father or his extended family, he decided to shed his surname and take up a new one. Being very close to his mother narrowed it down to an amalgamation of her first name, ‘Rani’, and his relationship with her: a ‘son’.

Reality paving the way for his destiny

Let’s rewind to Aakash’s teenage years that turned this shy Indore boy into an outgoing travel and social entrepreneur.

When Aakash was 14 years old, computers fascinated him immensely. He wanted to go for computer courses, but his single mother could not afford them. The notion of we’re all equal with equal opportunities came down crashing and reality hit him. He says, “It taught me that where you come from makes a difference and lasting impression on the choices you can afford.”

Ideally, something like this would leave anyone frustrated, let alone a shy teenager, but he drew strength from his all-time favourite hero: Swami Vivekananda.

He realised that he wanted to be an enabler for those who are underprivileged. His resolve was simple: to not let the barriers of socio-economic status come in the way of the dreams of the underprivileged. And thus was born The Golden Bird Foundation, an NGO that works to provide education to underprivileged children in India, and all this when Aakash was all of 15!

While some didn’t take him seriously, and some others mocked him, life itself had its own lemons to throw at him – no deep pockets for capital, no stable income and not being well read of the legalities of registering and running an NGO. He reminisces, “The only way out was to earn whatever I could as a boy of 15. I took a job at ‘Tikona’, an Internet service provider, and worked as a door-to-door salesperson. “The job was the kind that some people didn’t approve of and even looked down upon, but I could not stop thinking about the NGO and that was enough to keep me going with what I had,” Aakash recollects.

In 2011, he travelled to Delhi on his own, to register the NGO and there has been no looking back ever since. He became a social entrepreneur to help the under-served communities and in turn found his destiny: to travel and help as many as he can.

What’s in it for him?

Aakash holds a Bachelors in Business Administration. He tells us, “When I travel, I explore and it makes me feel alive. Travelling has helped me introspect and also understand my countrymen better, their real problems and what life means to them. This is real experience and knowledge and it is invaluable,” he says. He plans on pursuing a Masters in Social Entrepreneurship.

But let’s get down to brass tacks; you need money to make things happen. Despite the cash crunch, wanderlust has always kept him going. “Most of the time I run out of money. I save and cut costs and honestly, this adds to the thrill.” Since he has been travelling for a while and has garnered attention, he now gets sponsors and things are not as rough financially.

When he started off on this unconventional path, many called him names, and some still do. He takes heart in the fact that the support system of amazing friends and teachers he looks up to has always appreciated his work.

Initially, Aakash’s mother wasn’t in favour of him cycling and hitch hiking to far-flung pockets of the country. With time, she realised that it wasn’t a whim, but really his calling. It helped that Aakash’s work started getting recognition.

And miles to go before I sleep…

Quiz him on his life plans and pat comes the reply, “I want to keep travelling all my life and create a business out of my travel to keep it sustainable. Right now, I am making my dream into my business and this helps me earn, work, live at the same point of time. After my Masters, I would like to work for a travel company like: Fox Traveller, TLC, for a while and then get back to what I do best: travel solo for the rest of my life. I want my life to be about contributing my time and knowledge towards the society through my NGO.”

One could say Aakash embodies what JRR Tolkein said, “Not all who wander are lost.”