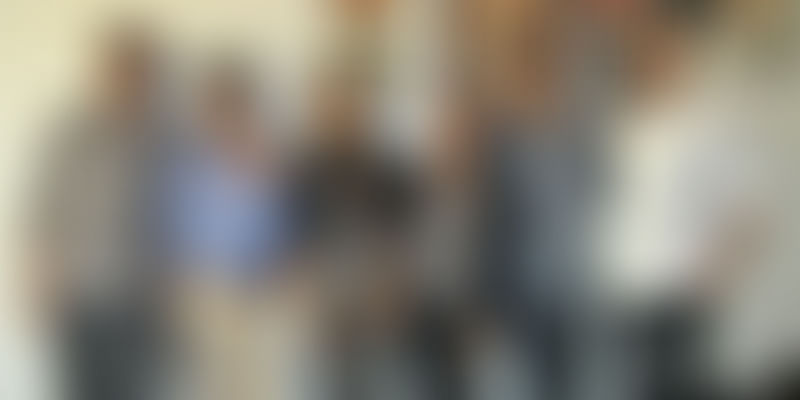 Imagine being able to have 24*7 access to a personal stylist and a comprehensive list of online and offline shopping resources. The founders of Dekkoh will have you believe that you need look no further than their mobile-only app that lets users browse fashion products across categories such as apparel, footwear, jewellery, and accessories from both online and offline stores. By focussing on both online and offline channels, they aim to give users more variety in terms of style, quality, and price points.

Co-founded by Aditya Chalasani (27) and Varun Mathew (27), the Dekkoh team currently comprises seven members. Aditya is a University of Southern California graduate and was working for Oracle in California before coming back to India to co-found Citizens for Accountable Governance (CAG), under Prashant Kishor, which worked on Narendra Modi's 2014 election campaign. Post the elections, he co-founded Dekkoh with Varun.

Varun, an NLSIU grad and a 2012 Angela Merkel fellow, was working in the Private Equity(PE) sector till 2014 before joining a micro-finance company. He decided to co-found Dekkoh to help bring SMBs online. Anirudh Dasu (25), a graduate from BITS Pilani, and a full-stack developer is Dekkoh’s CTO. Prior to joining Dekkoh, he worked with a major app development firm in Bengaluru.

The startup was bootstrapped until June 2015. At one point, they just had a couple of months of runway left. Inspired by Airbnb’s ‘cereal hustle story', they pitched for and landed an association with the Ministry of Tourism to distribute ‘hitchhiker's maps to tourists’ across five international airports in India. Varun adds,

The funds we raised from that exercise have helped us build our team and product, and we are now looking to raise an investment round for expansion.

Dekkoh released their MVP in December 2015, and currently claim to have about 2,000 users, 87 stores and several hundred personal stylists on their platform. Going forward, they aim to grow their user base and tie up with more offline and online stores. Another feature in the pipeline is an option for ‘Trials at home’.

On downloading Dekkoh and logging in, users are taken through a short three-to-four-question quiz that helps the app understand the customer’s style preferences. Then, on the next screen, users are given access to different style options such as ‘Runner’s Digest’, ‘Beach Holiday’, ‘Party On’, and ‘Be Date Ready’. There are custom options for men and women too. The app also includes an ‘Ask a stylist’ tab where users can make a personal styling request based on the occasion and their budget, add additional details if needed, and get responses from professional stylists. Dekkoh currently has a small team of internal stylists, an external network of vetted stylists and stylists handpicked by store owners. Varun explains, “A number of offline and online stores have appointed their own personal stylists on Dekkoh – so the platform is vibrant with lots of players from the fashion industry.”

After a user has decided on a product, they can either buy the product through the app or if the store is located in their vicinity, they can call up and visit the store themselves. The app allows users to check if the particular product they are interested in is in stock.

To help with organic growth and ensure stickiness, the app also encourages users to review a store and invite their friends onto the app and rewards them with ‘Karma points’ that are redeemable at local pubs. Dekkoh earns a commission from the stores for every successful transaction on their platform. In the future, they aim to include more premium features and monetise through other channels such as subscription plans.

As they cater to both men and women, Dekkoh has noticed a few patterns based on user behaviour. Varun explains,

Women spend a lot of time on the platform and generally do a lot more research and have more questions compared to men, who generally proceed with their transactions faster. We have also seen significant interest from Tier II cities, which do not have local outlets for some of the premium products available online.

Fashion is estimated to be a $35 billion market in India. As a sector, fashion has gone through a lot of changes in India, and most players are now focussing on personalisation. Tiger Global backed Roposo positions itself as a fashion-focussed social media platform. Voonik, which was one of the early starters in this space in India, raised $5 million from Sequoia Capital and Seedfund in June 2015, focusses on personal fashion recommendations for women.

Limeroad, a social discovery platform for women, had raised a $30 million Series C round from Tiger Global and other existing investors in March 2015. Mobile-focussed fashion discovery platform Wooplr raised $5 million from Helion Ventures in February 2015. Then there are e-commerce platforms such as Myntra and Jabong, which have gone from pure-play marketplaces to platforms that focus on personalisation, with Myntra also having its own product lines. Dekkoh and Kae Capital backed Fynd are among the most recent players in this sector.

Dekkoh has an easy-to-use interface, and makes good use of relevant images and tabs to ensure that fashion discovery and shopping on a smartphone are interesting experiences. The app will appeal to both amateur and experienced shoppers looking to make purchases online. The personal stylist section is also well-thought-out and executed.

The app caters to the needs of both men and women, which is not a very easy task. Most platforms focus on only women. The mix of online and offline stores on the platform gives the end consumers more variety and choice.

Including more categorisation features could make the app more user-friendly. Otherwise, novice shoppers, who do not know what they are looking for may feel overwhelmed. Including more flexible delivery options and ‘same-day’ or ‘next-day delivery’ for hyperlocal stores may increase impulse buys and increase stickiness of the app.

As a product, Dekkoh aims to bring online and offline players on one platform and give SMBs a chance to interact with customers more intimately. Also the app is creating a platform for stylists to help end-consumers with their insights and make money in the process. With an experienced team that has hustled their way so far, it will be interesting to see what strategy they follow going forward to further enhance their product and expand their user base.