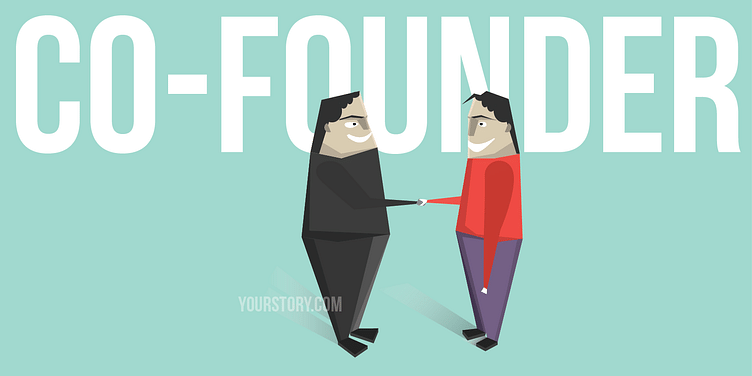 There seems to be a lot of confusion regarding who best qualifies as a potential co-founder. Although there seem to be no shortage of “business guys” looking for co-founders to build products, there seems to be a dearth of tech co-founders in the market. I hope to offer some clarity in the matter via four real-life stories from my nine-year journey as an entrepreneur. I do hope they help you in some way.

Story 1: Get hired as a co-founder

I became a startup co-founder by accident. One fine day, in June 2006, my colleague, Chhavi Gupta took me out for lunch and pitched the idea of building a startup together. There were no concrete thoughts on product or market, just an idea to build a business together. I had always wanted to build a business, and Chhavi was an experienced entrepreneur. I took the jump. We defined a product together, built, a team and I have never regretted that decision… ever.

Sometimes it takes an external force to move a static object. When that force enters your life, do not resist it.

Story 2: Hire an employee who becomes a co-founder

In 2009, my first business had failed. I was trying to make ends meet as a consultant. My first instinct was to hire an experienced tech co-founder. I put up job advertisements and that’s how I met Vasu (director of Technology at Bizom). I fell in love with his clarity of thought and positive attitude. Vasu was like me in Story 1 – he saw this as an opportunity to pursue his lifelong dream and made the jump. We later co-founded Bizom. I cherish the day I first met Vasu.

My first meeting with Anoop (Architect and R&D Head at Bizom) was also serendipitous. I had worked hard to establish contact with him - an effort that seems more than worthwhile, in retrospect.

Never underestimate the time one needs to invest in hiring the next rock star; he or she may end up co-founding businesses with you.

Story3: When to say no to attractive offers to co-found a business

In 2012, a startup pitched co-founding Bizom as a 50-50 venture. This startup was built by someone I really respected as mentor. (Sorry, I cannot divulge the name). The team had extremely impressive profiles, but their business was not doing that well at the time. One of the founders was moonlighting with the team while working as CXO with a large corporate, and was not ready to take a full-time plunge till the startup had settled. We were to handle the tech part and they would handle business and operations. Being inexperienced in sales and business in general, the offer sounded very attractive at the time (Bizom was just an idea and a team at that time). We rejected the offer because we did not want a senior guy (co-founder) moonlighting and taking on significantly less risk than us. In retrospect, it was an awesomely bold decision, but the right one to take.

You will come across towering people…even mentors. You may have to say no basis your own faith system. Do not shy away from tough calls. Define what your company stands for and stick with it. There are no wrong decisions or missed opportunities as long as you keep trying.

Story4: Finding a co-founder even after your business is already established

I have known Supreeth (CPO at Bizom) since 1999. We lost touch for a few years in between and met again in 2008-09 when he was moving from his startup to a corporate job. I had always aspired to work with him. The opportunity came earlier this year when he was once again looking for a startup opportunity. I grabbed it with both hands and pitched Bizom to him with vigour. As it turned out, though he joined Bizom a bit late, he is a co-founder! Though we are profitable, we believe our best scale is still in front of us and we will achieve it with his help.

Keep all the people you respect in your network apprised about your startup. You may just find your next core team member in your own network.