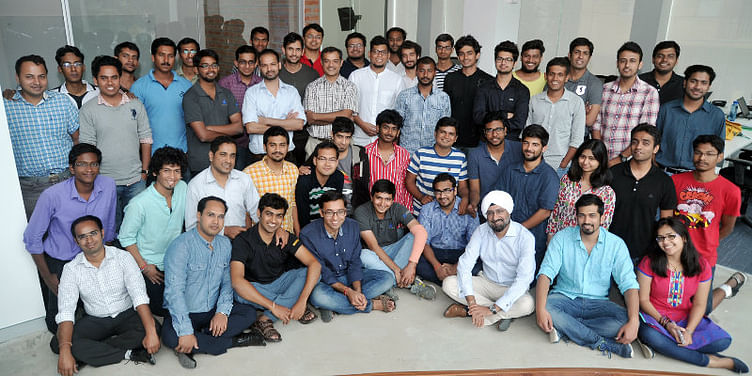 Most entrepreneurs today are reluctant to look beyond the much-hyped e-commerce world. Billion-dollar valuations and the heavy inflow of funds have put innovation on the backburner. However, there are some startups that still venture into capital-intensive sectors like manufacturing. It was the desire to startup that led IIT Madras alumni Tarun Mehta and Swapnil Jain to return to their alma mater to work on developing a Lithium-ion battery pack.

During my graduation, I frequently interacted with electric scooter owners. Most of them expressed concerns over negligible power, lack of service support, and poor battery life.”

An initial survey gave the duo insight into how consumers are excited about an electric scooter that is on par in terms with petrol scooters in terms of performance.

The Ather-S340 is a connected vehicle powered by lithium-Ion battery pack, and features a digital touchscreen dashboard, a light-weight aluminum chassis, and can reach speeds of 75 kmph. The smart dashboard in the vehicle will enable users to create personalised profiles, choose riding modes and set other ride preferences. The vehicle charges upto 90 per cent in less than an hour. Its touchscreen dashboard contains a Vehicle Control Unit (diagnostic system) that constantly monitors the rider’s behavior, a GPS, and an indicator showing how much distance can be travelled on the remaining charge. The personalised profile feature will allow users to create their profile comprising all the basic information.

Ather Energy was lucky enough to win its first set of orders at the prototype stage, which worked as a catalyst to raise funds. In 2014, it received Rs 45 lakh from the Technology Development Board under Department of Science and Technology, IIT Madras, and Srini V Srinivasan, IIT alumnus and founder of Aerospike.

In the second half of 2014, the startup was again running short of funds as it was in its testing phase. Tarun says that investors weren’t willing to take a risk on the idea of building a smart electric scooter for the Indian market.

Post a lot of rejection, both Tarun and Swapnil approached the founders of Flipkart - Sachin Bansal and Binny Bansal -who believed in the idea and invested $1 million in Ather Energy in December 2014. This funding round also saw the participation of Raju Venkatraman, serial entrepreneur and CEO of MEDALL.

In May 2015, the startup scooped up a fund of $12 million from Tiger Global. The new round of funding has been used for development, testing, production and the launch of the Ather S340.

The majority of our resources are allocated for design and development. Our intention is not just to build a better electric vehicle, but to offer a better two-wheeler. Apart from the battery pack, we have also designed and developed key sub-systems like the fast charger, BMS and a touchscreen dashboard.”

Swapnil looks after system design and development. As an essential part of the Formula SAE (Society of Automotive Engineers) team of IIT-M, he has led various product development projects.

Ather Energy is in the process of opening up its first manufacturing plant in Whitefield. Additionally, it has its design centre in Victoria Road. Since 2013, the team of Ather Energy has expanded from 10 to 90. The product development team has 70 members, while the remaining 20 are in sales and support services, HR, finance and business operations.

We are currently in the final prototype stage. The fully integrated vehicle is currently under testing and validation, following which we will proceed for statutory approvals. Significant electronics integration and testing will be our focus area in 2016. Our procurement team is already working with the appropriate partners to ensure that we source quality components,” says Tarun.

Rollback of electric vehicles in India

Though Government of India has announced “National Electric Mobility Mission Plan (NEMMP) 2020” in 2013, the delay in implementing the same has reduced the number of electric two-wheeler manufacturers from 28 in 2011-12 to seven in 2014-15, according to a report by National Institute of Urban Affairs.

However, with the government targeting 100 GW of solar by 2022, and an ambitious plan to put seven million electric and hybrid vehicles on the road each year by 2020, the industry is likely to gain pace.

A glimpse at the global market

Globally, several companies have released electric vehicles into the market. These include Brammo, Zero Motorcycles, BMW, Electric Motorsport, Hollywood Electrics, Yamaha, Harley-Davidson and Lito. Japanese Terra Motors started selling electric scooters in India in 2015 and announced that they were building a $5 million plant in Gurgaon. At the Consumer Electronic Show 2015, Gogoro announced the Gogoro Smartscooter and Gogoro Energy Network, a battery-swapping network.

Though the electric vehicles industry is yet to gain momentum, six states across India including Delhi-NCR, Bihar, West Bengal and Orissa have witnessed the operation of 250,000 e-rickshaws. With the proliferation of toxic pollution, the adoption of electric vehicles is likely to be amplified across cities in India. An IIM-A report says that the low-carbon scenario with ‘highest’ EV penetration shows a 50 per cent drop in PM 2.5 by 2035.

Coimbatore-based electric vehicle startup Ampere Electric has developed electric cycles, electric two wheelers and e-scooters. The company also claims to be the first one to make their own chargers (36V and 48V) for e-vehicles.

Already backed by IIT Madras, Flipkart founders, Tiger Global, Ather Energy is set to invest Rs 25 crores by 2016 to kickstart the manufacturing of the S340. Though the company claims that S340 will be the first electric scooter to be completely designed and manufactured in India, only time will tell if their vision will reach fruition.