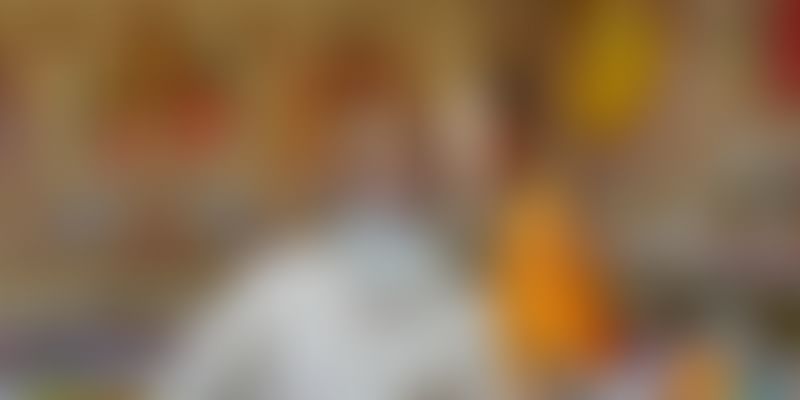 A series of uniform dots using a ball-point pen on paper takes the shape of detailed sketches by Soni Jogi, one of the 15 members of the Jogi family in Rajasthan that has developed a form of art called ‘The Jogi’. An intriguing cross section of people ranging from teenagers dressed in casual clothes, to fruit and vegetable vendors, school children and a multitude of vehicles zigzaging their way through traffic – Soni’s sketches provide a glimpse into the chaotic spectrum of an Indian city. The sketches are part of the ongoing “Chronicles from Rajasthan – Art of the Jogis” exhibition at the Bikaner House in New Delhi.

“Over the last four decades Ganesh and Teju Jogi and their six children developed and built their language of art into a formal structure,” says Tulika Kedia, who has authored the book, “Contemporary Expressions – Art of the Jogi family”, which was launched at the Jaipur Literature Festival recently. Their drawings vividly illustrates the experiences between the city and the village, between tradition and modernity, between freedom and oppression, she says. The Jogis, were originally a group of wandering minstrels who used to earn their livelihood by singing devotional songs and ballads in return for food and money.

“Their hardships encouraged them to try their hand at drawing and this is how an original art form which wove tales of the village and the city, of gods and goddesses, mythology and modernity emerged,” says Kedia. Renowned artist and anthropologist Haku Shah encouraged Ganesh to draw. Setting pen to paper and forging a fresh new narrative style, Ganesh was soon joined by his wife Teju and eventually six children in what became a family tradition.

“They were still storytellers, but in a different way,” says Kedia. Kedia, who has curated an ongoing exhibition of their art at Bikaner House in New Delhi, has over 800 sketches of the Jogi family in her personal collection. “The first time when I saw the art of the Jogis, I was completely enraptured by the contemporary expression and simplicity in their style of painting,” she says.

On writing a book exclusively on the ‘Jogi art’, Kedia says, “It is a serious attempt to bring international visibility to the beauty of this little known art practice, to give the indigenous art of India the much needed attention.” While Ganesh died at the age of 72, his art of drawing free flowing lines, enclosing imageries that are often filled with dots and individual patterns with precision through a ball-point pen, is being taken forward by his wife Teju and other family members with one of the youngest a 16-year-old.

The ‘Jogi Art’, which looks at the daily lives of ordinary people through a different lens, also brings out the emotions in animals ranging from a fearless lion to a lone leopard looking hungrily at the hyenas to the intimidated prey. Teju, the eldest member of this family tradition often displays the intricate narrative of women’s freedom in a repressive gendered society through a group of women in urban outfits shown seated on stylish motorbikes, or through unbelievably tall women sporting short hair, and wearing fashionable trousers standing in a utopian landscape.

Depicting the vast creative freedom and innovation within the art, one of the youngest members Jagrut aesthetically captures the village life with men and women working in their farms and homes with minute detailing of cows, hays and hand-pump to fill the spaces in the narrative. Prakash Jogi creates beautiful imagery of god and goddesses through the precise use of dots. Recognising the ‘unseen and rare art’ of the Jogi family, the Rajasthan government had last year on Gandhi Jayanti launched a project with over 70 display sites showcasing the ‘Jogi Art’.

To promote the rich heritage of indigenous artists of Rajasthan Chief Minister Vasundhara Raje invited five members of the Jogi family to create independent illustrations on the hoardings of the state, which also carried their name and photograph as acknowledgment. Meanwhile, the ongoing exhibition in New Delhi is being presented The Kanha Museum of Life and Art, Must Art Gallery of which Kedia is a director.