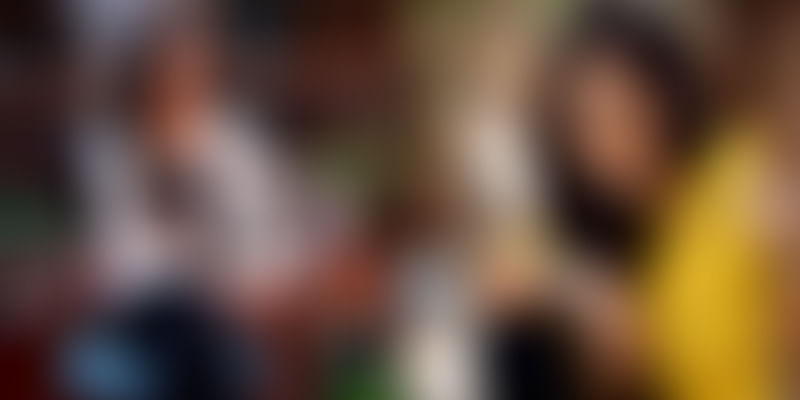 There was a time when Saumya Gupta’s life seemed straight out of a movie. All she could see were the faces of relatives, friends, and loved ones, not to mention those self-appointed wardens of our society, circling around her head saying, “You’re a failure!”, “You’re good for nothing”, “Your life is going nowhere”. But, rather than focusing on a botched Plan A, she took a stand, which changed her destiny.

A pure-bred Bombaywaali, our protagonist had all the traits one associates with the city – she was fierce, fearless, ambitious, business-minded, and last but not the least – stylish. Raised by a family of entrepreneurs, Saumya had completed her schooling in Mumbai, but decided to make a bold move at that juncture. She decided to move to the US to study flying. “Back then, not too many girls went for flying. This was considered a BIG step to begin with.”

She followed through with her decision to go against the tide, and did everything right. But unfortunately, a stroke of bad luck and worse timing meant that the completion of her course coincided with the 2008 recession, where the pilot community was among the worst hit. When she returned, she had no formal degree, no job and had just spent Rs 50 lakh on her course.

“I sat at home for a year applying to various airlines and not hearing back thanks to the 2008 recession. I went through depression imagining society thinking all sorts of things such as how I had probably failed in the US, them wondering what the hell I was up to, and why I was not flying. I felt like a wreck and a big loser.”

Her parents finally broke the deadening silence. They told her she had to get a job and earn now, and that the pocket money saga had to end. But getting another job wasn’t easy either. “A pilot is called a professional, but on paper, we’re actually 10+2s with a science background. No one gives a 12th pass a good job. I needed good pay. I was almost 20, I wanted to pay the bills as well as party.”

She wound up in a call center and drew a meager Rs. 20,000 a month thanks to her less-than-modest credentials.

The first day itself, I knew I would not last. I knew this is not what I want. I took calls for about eight months and started saving some money on the side, for an escape plan.

But the day soon came when she experienced a complete breakdown after a horrible day at work, and cried herself to sleep feeling absolutely trapped and fed up. “That’s when my mom told me to find something I was good at. I could only think of clothes. I told my mom I want a few garments to sell and we will exhibit at home. Ma, as supportive as ever, said ‘Let’s do it!’” And Ten on Ten Clothing sees the light of day.“Luckily, the day I decided to change my field and officially throw a potential Rs. 50 lac career out of the window, my parents said they believed I would still go far and that they wanted to see me happy even if it meant changing my career. Even though they clarified that they may not have the funds to invest in my business, their approval would suffice for now, I thought. So, I started my business with the simple goal of being able to pay bills and rotate the money.”

They approached a garment exporter, who housed export surplus from high-fashion brands like Roberto Cavalli and Jean Paul Gautier. “I could afford to buy only 30 pieces. We texted all our friends in Mumbai to come for a small home-exhibition. People came a day before, salivating over the brand names, and wanting to grab the best stuff. We were sold out 24 hours before D-Day!”

For months after, Saumya took calls at night and sold clothes during the day. Strike two was executed with 45 garments, which also flew off the racks, as expected.

“I thought I was on to something. And I felt like I must capitalise on this momentum. Just restricting my scale to friends and references wouldn’t cut it. I had learnt the difference between class and mass by now. I wanted portals like Fashion & You to see my stuff and onboard me. But I did not own a nice camera to shoot my garments; and I was stuck on the capital front. I was very tight on money. I had given up socialising and chilling with friends to save every penny.”

One step at a time was the approach she followed. “I approached a photographer friend who was looking to shoot a portfolio, and told her I would provide the garments and share the studio cost for a shoot. Neither of us had money for a model. We approached Bosky (of Splitsvilla fame), who happened to be my older sister’s friend. This big hearted girl agreed to shoot for us for free! She even did her own make up as getting a make-up artist was out of question.”

She tried her luck and sent the images to the team at Fashion & You, who loved her clothes and agreed to take her on board.

But, going mainstream came with another set of challenges. “We were asked to get a professional photoshoot done,

which was going to cost us a bomb. Again, we were stuck on the capital front. I had an idea, but this would exhaust the last bit of our money to shoot and take a risk with this portal. We decided to get college students to model. Mom and I stood outside Mithibai College trying to sell our shoots to girls. Some looked at us like we were creeps and some agreed in exchange for images for their Facebook. The girls would be given two dresses each from our side as a token of appreciation.”

“It took us three months to gather funds, as our small chunk wasn’t enough. We rotated the money, lived like misers for a long time, and saved every penny to grow the business. I wasn’t even eligible for a loan as you needed to be 23 years or more, and I was only 21! I’ve begged for loans at HDFC bank when I needed one, and lost a lot of time as I had to wait and save for any form of scaling. This meant sacrificing many things and waiting patiently for the bigger picture.”

They finally shot with their student models and their brand Ten on Ten went live on Fashion & You. Not only were they sold out, Fashion & You wanted more. “There was no looking back after this.” From 60 garments to garments worth over Rs. 6,00,000 now, they have grown 150% every year. ISO certification followed, and brought with it the shift from working out of a parking garage to a 1,000 sq ft office, to a 5,000 sq ft office in the heart of Bombay’s corporate precinct. “We are clocking about Rs. 1-1.25 crore per month, approximately, and close at Rs. 10-15 crore annually.”

Only last year, she won an award from one of her role models, Kunal Bahl for contributing to his success story as the Woman Entrepreneur of the year-2015.

She attributes the success of her business to its fool-proof building blocks – courage, conviction, passion and principle.

Simply pondering over great ideas won’t help unless you go out there and execute it. This is exactly what I did. I knew what my brand stood for, who the Ten on Ten target audience would be, I had them defined. It was clear to me from the very start, that my quality is everything. I’ve never sold something I wouldn’t wear myself!

Even as she basks in the glory of a success hard earned, she still remembers her toughest moments as if they were yesterday. “Facing the world with a career change! The public can point out all your failures and drag you to your lowest low. My plan A didn’t materialise, big deal! So what if I am not in the place I had initially envisioned? I am still questioned about that after all these years. I have now learnt ‘don’t let anyone bother you and place your passion and happiness first’. Clothes and fashion are my passions, I love working, I love the challenges, I enjoy every day at work. The world will try to pull you down, so don’t fall for that. They’re not really looking out for you; they are only looking for faults. If you have a dream, go for it.”