India needs freedom from mediocrity, inefficiency and incompetence: Vivek Agnihotri, Director of the film, Buddha In A Traffic Jam 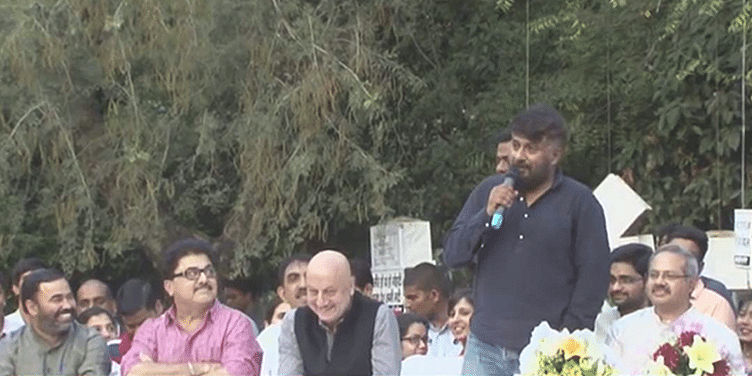 So you must have read about Buddha of the new India, the one who is stuck amid challenges (probably, like many of us in a traffic jam!) and yet is not deterred from moving ahead. As entrepreneurs and part of India’s startup ecosystem, you’re not new to the hurdles you confront while exploring new ideas. And, you must have watched and related to the teaser of the film – Buddha In A Traffic Jam – which is based on this basic thought.

We’re not going to tell you anything more about Buddha In A Traffic Jam (not because we’re trying to be secretive, but because we know just as much about the movie as you do and are just as excited about its upcoming release!) but we’ve got some really interesting stuff for you to ponder over from what Vivek Agnihotri, the director, had to say at Jawaharlal Nehru University (JNU) where the film was premiered recently.

Taking his stand on the recent controversy that embroiled JNU, Vivek Agnihotri said:

“I studied at the Indian Institute of Mass Communication, which is situated just behind JNU. The walls, the graffiti, the trees…nothing has changed in JNU except one thing – it is for the first time I am hearing the chants of Vande Mataram and Bharat Mata ki Jai, so loud and clear.”

Talking about the intent of making the film – Buddha In A Traffic Jam and why he decided to have premiere at JNU, the director said:

“I studied at a time when there were limited choices. I studied in a deprived society and this hasn’t changed in India’s 60 years of Independence. Even today, a student from a small town, who may not know English, is made to feel inferior by the English-speaking crowd in colleges or rather those with a certain mind set. I too have experienced this.

I feel Intellectual property has been copyrighted (by a handful of people) because those who love their villages, their towns, their country, in spite of its failures, are never been given the tag of intellectuals! (That tag) is awarded to people who talk of a country that resembles a Utopia. The real India has no voice – be it in colleges or universities.

It is this frustration which led to the making of the film. The film talks about the revolution that India needs.”

Sharing a memory from his college days, he said:

“I questioned my professor when he said that India needs freedom from a lot of evils. I asked him, how? And I have been searching for this answer from the last 30 years.”

So what does the country need freedom from?

He concluded by saying:

“Big banner studios in Mumbai had said they would release Buddha in A Traffic Jam. But nobody went through with it. It was supposed to be screened at the Indian Film Festival but was removed from the schedule at the last minute. Thankfully there are some people who support an initiative like this. And, that’s why the film has been showcased at more than 30 film festivals across the globe and went on to win many awards. Today, the film is being screened at JNU, which is a victory for student rights and the freedom of speech and expression and victory over the very forces which prevented the making of the film.”

Buddha in a Traffic Jam – A Vivek Agnihotri Feature.