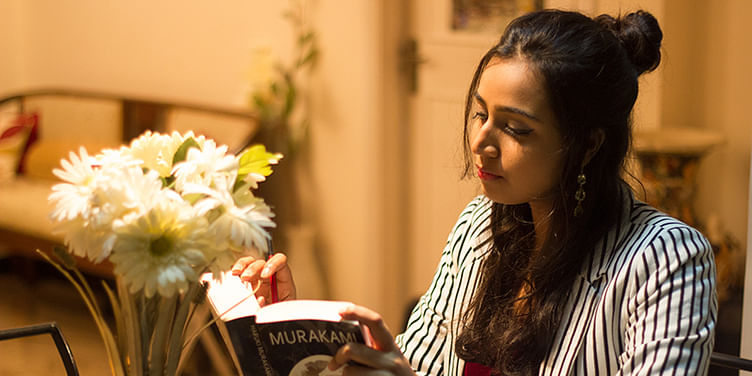 Growing up, Chantelle Menezes would pen her thoughts and observations in diaries; today she is content manager and Co-founder at Explorate.in, which helps people make smarter purchases. Chantelle is at the helm of affairs there.

Whom does it take to create a fashion-forward website that helps users find the best products from multiple online stores, using peer recommendations? Fun-loving people with a vision. At least that is what Chantelle Menezes, all of 22, thought when she and a few friends (who form the core team) founded Explorate.in six months ago, to help people make smarter purchases.

Chantelle graduated two years ago from St Xavier’s College in Mumbai and had no clue she would be part of anything to do with fashion. But, as luck would have it, the friends got talking and Explorate was born.

Explorate’s core team members went to high-net worth NRIs with a solid business idea and pitched it to the best of their ability, and ended up getting their first round of funding. It helped that all five of them, who comprise the core team, are from different parts of the country. This brought in an air of diversity to their vision. As they were very young, the team members decided to leverage social media to their best advantage.

Explorate’s primary challenge has been reaching out to a larger audience base in the already crowded sector. Also, community building and user engagement is a necessity as their content is generated by users.

“We recently did a campaign called LadiesFirst on Twitter, focussing on inspirational women, everyday trials, funny situations, and idiosyncrasies that women typically face and it got an amazing response. On a personal level, in my own small way, I always try to give the collective woman’s voice the microphone it deserves. In my own experience, women are more often than not greeted with incredulousness or polite complacency, at best, especially in a space like the startup community, which is dominated by IIT-ians and the proverbially business-minded. It gives me immense satisfaction to meet and support other women who take bold steps to fight against the odds and pave their own path to success,” says Chantelle.

Intrigued by the world of fashion

Chantelle was intrigued by the world of fashion right from the beginning. Her mother, relatives and friends have always been up-to-date on the latest trends, and in her travels abroad too, she was exposed to different cultures of fashion around the world.

It was a further advantage that Chantelle loved to express herself and had a chest full of diaries. Her writings clearly were an extension of herself, which was why she started recording stuff and her observations. “Some friends even borrowed my diaries to read like a book, saying they found them entertaining.

Throughout school and college, it was just a medium to vent and to record observations and make myself laugh. Who knew all that scribbling would convert into writing structured and well-thought out content for a project as exciting as Explorate? I certainly didn’t,” says an amused Chantelle.

The platform was created by using consumer experiences to help other buyers make smarter purchases. The company started with a beta phase, which had a crowdsourcing video made by them (featuring multiple Indian CEOs), and reached out to people asking for reviews of food, and online and offline shopping. That is when they decided online shopping was the best sector, which needed product discovery engines.

Explorate’s journey has been very satisfactory, says Chantelle. In six months’ time, they have 70 per cent returning customers, with some users spending up to four hours on the platform. As far as traffic is concerned, this site has 20,000 users and a total of 1,80,000 unique page views. Explorate also has 50,000 products recommended by their users so far.

The very basic tenet at Explorate is to make shopping a smarter and more social affair. Chantelle, a great fan of being well-informed and uncluttering cluttered spaces , works just like that. In the cluttered space of e-commerce, instead of spending hours on multiple websites, trying to find the perfect dress or bag, Explorate uses the combined recommendations of women who love to shop. So what one gets is beautifully curated products from all the best websites, that can be bought at one common place. It’s a Pinterest for fashion that saves time for the modern, working woman. Since it is user-generated content, women are more certain of the quality of these recommendations and all kinds of tastes and preferences are accounted for.

Explorate vs. the big players

Explorate is different from the likes of giant e-commerce sites like Flipkart, Amazon, Koovs, and Jabong because they are a social commerce platform. Chantelle believes that as the e-commerce market gets crowded, discovery engines become prominent.

Explorate’s competitors (discovery engines) are Roposo and Wooplr. The fact that Explorate is completely based on user-generated content sets it apart from the herd. It means that they don’t recommend products but their users do. “There are too many people with too many different tastes out there. We want to cater to all of them and that can be done only through crowdsourcing,” says Chantelle.

“Further, we realised that even people with high disposable income do not mind buying unbranded clothes from the local street market. But when it comes to trusting online shopping, delivery, service, etc becomes an important aspect and that is what we do – provide social proof,” says Chantelle.

The plan at Explorate is to develop it as an essential shopping tool for e-commerce and to discover long tail e-commerce through social proof and user recommendation.

With regard to the market size and predictions, the Explorate team says the apparel industry will be a $100 billion market by 2017, of which e-commerce is expected to have 18 per cent stake with an $18 billion market and affiliate sales are expected to amount to up to $2 billion by 2017.

They do not have an app yet. Explorate wants to evolve into a flawless web product first and then translate into an app.

One can shop multiple products from several websites through a single platform. The products are curated and organised into themes by genuine users. The website is essentially divided into broad categories – clothing, accessories, beauty products, and quirky. Each category is further broken down and using the sophisticated tagging technique that Explorate boasts, the search bar allows the user to find out products one is looking for based on criteria such as type, trend, colour, or even occasion.

Using technology, the Explorate team wants to replicate the offline experience of shopping online. Social shopping is just the beginning. As they scale up to reach newer heights, they are actively looking for their next round of funding.

Away from work, music is Chantelle’s greatest inspiration and she recently performed on Coke Studio and a few MTV Unplugged episodes.

A self-confessed foodie and travel junkie, Chantelle is a dance enthusiast too. “I’ve always been somewhat restless when it has come to experiencing things, venturing into unchartered territory and getting out of my comfort zone,” she says.