How Smita Bharti, a survivor of the domestic violence became a serial entrepreneur and social crusader 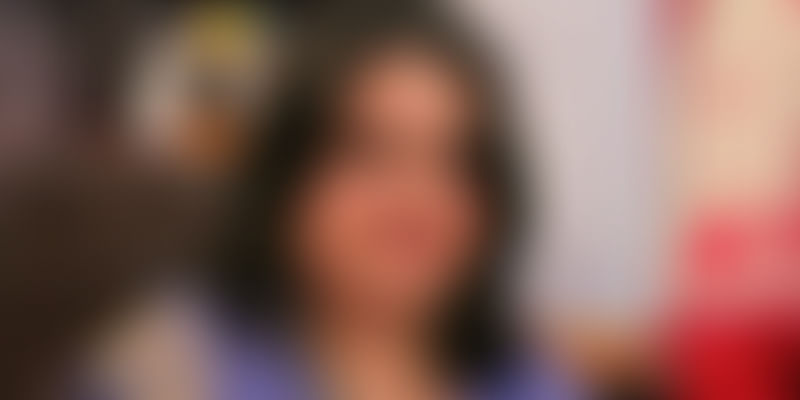 Smita Bharti’s life underwent a transformation in 1995. The domestic violence survivor walked out on her abusive husband and embarked on a journey towards a better and more independent life.

A fiercely independent single parent of two, Smita started teaching and worked with the Krishnamurti Foundation India, Pune, for a year followed by a brief stint in Vasant Valley School, New Delhi till 1998. Simultaneously, she tried her hand at entrepreneurship with Nafees, a manufacturing unit for linen and bean bags for a year from 1987 to 1998, when she shut it down.

But things really picked up pace in 1999 when she started working with women at Sakshi, who had been through similar violent experiences . She officially joined Sakshi in 2004. Sakshi has been a registered NGO since 1993 and was co-founded by Naina Kapur and Jasjit Purewal. The NGO focusses on promoting everyday equality, ending gender violence, law reform, and judicial education for gender equality. She went on to head Sakshi from 2007 till 2015.

I am a survivor and not a victim, and this is what has guided all my work. From 2007 to 2015, under my leadership, Sakshi focussed on mainstreaming conversations we feel most comfortable burying under the carpet, or ignoring, or dismissing,” says 51-year-old Smita.

The idea of sacrificing her artistic leanings for a well-paying corporate job never appealed to Smita, who is now a creative director, playwright, theatre and multi-media practitioner. A post graduate in English literature, she took on multiple jobs such as translating books, delivering theatre-based workshops, writing plays and directing huge story telling events

In 2005, she founded Hungry Heart Festival with Sohaila Kapur, Monica Bhasin and Lucia King to make theatre a viable proposition at a time when commercial theatre was limited to a few groups. The festival explores contemporary lifestyles and personal relationships through theatre. Three theatre festivals were held at the India Habitat Centre, New Delhi in May 2005, 2006, and 2007.

“We wanted to create theatre that stemmed from our daily realities, and provided a platform to both emerging and established actors, directors and playwrights to consider theatre as a viable livelihood option,” says Smita. She adds that Hungry Heart Festival is currently dormant but the four friends and founders have again joined forces to craft a strategic plan that will elevate the venture to new heights.

With 20 years’ experience in creative activism under her belt, she founded Bharti CreativeZ in October 2015, which helps people discover events happening in the city. This was the culmination of all the creative activism Smita had been doing pro bono for years. Bharti CreativeZ, however, will be a commercial venture It is currently in prototype stage without any presence in social media but they will soon launch their own platform Aganpakee.com for consumers to discover events. They can then share the information related to events via social media. It bridges the gap between users who are looking for events and event promoters who are in search of their audience.

However, Smita expressed concern over raising funds for her venture as it is neither purely mainstream entertainment nor completely documentary because it depicts reality. Her venture talks about gender equality, rights and sexual responsibility, which according to investors is intangible and unlikely to give significant returns. However, she says the 2013 Nirbhaya case really brought all these issues into the spotlight. All Smita’s ventures have been self-funded so far; however, she is looking at investors to raise funds for further expansion of her creative world.

There is no success like a packed auditorium, a standing ovation, and a brochure filled with logos of sponsors supporting the work. I have faced failures and not let it break me. I have tasted success and not let it divert me from my focus of why I am making the work,” says Smita.

Smita is full of appreciation for her vast network of artists, designers, writers, technicians, dancers, musicians, composers, singers, choreographers and producers who get active and come together as per requirement and project dynamics.

To prevent sexual harassment at the workplace, Smita delivers judicial education for gender equality. She has also helped incarcerated convicts understand the ills of domestic violence and child sex abuse via the medium of storytelling and theatre. Smita says she explored structural hierarchies and taboos, traumas and wounded psyches within people both in and outside jail. Her education eventually instigated prisons to ask questions about re-defining `safety’ and `security’ for themselves, break out of vicious circles of fear and lack of choice, and actively seek to transform their lives.

As a social activist, she demonstrated her experience in performance art through theatre, multimedia productions and films. She is a senior fellow at the KK Birla Foundation, a special fellow for WISCOMP,(Women in Security, Conflict management and Peace) and a Rotary World Peace Fellow.

I encourage people in the art of storytelling and role playing and that enables the re-scripting of personal narratives and the arriving at action points leading to sustainable peace building,” says Smita.

She is a certified trainer in Participatory Monitoring and Evaluation from INTRAC Oxford, UK, and in Conflict Management from Kurve Institute, Wustrow, Germany. She has also trained other trainers in Market Access for SMEs at Traidcraft, UK. Over the past decade, Smita has directed over 20 plays and worked on films, made video installations, created performative interactive exhibitions and designed audio books.

Her message to young girls

“Believe in what you bring to the table. Persevere. Do not give up, or give in to temptation and lose focus ever. It pays to stay honest to what your calling is. Even though the going may be tough at times, if you can face it and look the challenge in the eye, you will surface the winner.”