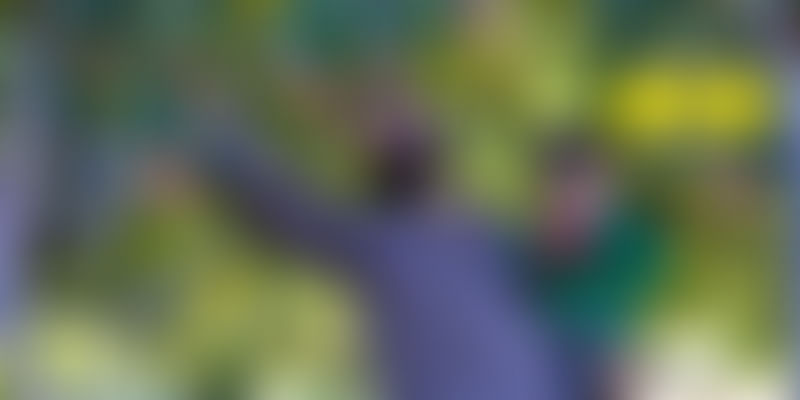 The famed Kashmiri apple – that luscious, crispy, juicy fruit, which envelops the entire Valley – is one of the prettiest vistas nature has to offer. Undoubtedly, the mainstay of the state’s economy, last year (2015-16), apple production touched 19.43 lakh metric tonnes, contributing to 65 per cent of Kashmir’s horticultural economy. The numbers itself are a testimony to how fundamental this fruit is to the rural economy. However, while the high production rates are definitely something to be delighted about, there is another side to the story as well.

Of the total produce, a mere 35 per cent qualifies for export quality as opposed to Europe, which exports nearly 80 per cent. Furthermore, approximately 10-25 per cent produce gets wasted due to lack of storage and processing facilities! In this scenario, how will the state, which has ambitiously set itself a target to increase the current Rs 3, 000 crore apple industry by five times in the next five years, achieve its numbers? Even if we keep this aside, the produce’s export quality and wastage have been the subject of an unhappy debate for decades now.

An epiphany, and he’s back with no plan

Khurram Mir, 34, left Kashmir after high-school with a love for numbers, which took him to US. Equipped with a management degree in operations research, Khurram worked for almost five years in consultancy. He says, "I was a critical contributor in the organisation. Yet, I was dissatisfied because I was veering towards grassroots development and was unable to find a starting point." Khurram started exploring the energy sector, something he had always found fascinating. But, somewhere along the way, he realised food was more important. And when his peers and mentors suggested that he go back to the Valley and start something meaningful instead of exploring an unfamiliar country, he packed his bags and came back – without any plan, and this time with a love for numbers, food, and Kashmir.

I told myself if I could create a vibrant economy in a conflict-zone; that in itself would be a great start. I was willing to fail young and gave myself a year to explore.

Starting up – Harsha Natural’s becomes the Apple of the Valley

Back in Lassipura district, an hour-and-a-half from Srinagar, Khurram started exploring the apple industry and its underlying problems. It helped that his father himself was a farmer, and one of the biggest fruit and vegetable traders of the region. Through his father, Khurram interacted with many farmer families and understood how the apple industry is suffering because of lack of storing facilities. This was leading to two things - wastage levels were increasing, and farmers were forcibly selling their produce at decreased costs. He says,

On an average, it takes 45 days for an apple to reach the consumer after it's plucked. It has lost 15-20 per cent of its water content, becoming a soft fruit. It's not a Kashmiri apple anymore.

So, in 2008, Khurram started Harsha Naturals with an aim to focus on the post-harvest aspect of the apple industry and set up a 2,000 MT cold storage facility. A ground-breaking initiative in the history of Kashmir's apple industry, this meant that farmers could now store their produce in Khurram's controlled atmosphere storage (CAS) facility.

This is advantageous because –

Even though Khurram managed to bring international facilities to the heart of Kashmir, the first year of Harsha Naturals saw only five farmers availing this facility. Khurram says, “It was scary, I have to admit. But, there was no giving up.” Khurram then diversified the company’s offerings. Along with the CAS facility, he started offering farmers automatic sorting, grading, and packing of the apples, completely eliminating manual labour. He also introduced infrastructure that would help in efficient ripening and waxing of the apples, ready for sale. And finally, Harsha Naturals tied up with biggies such as Reliance Fresh, who would directly buy the produce, eliminating middle-men as well.

Today, Harsha Naturals has grown from just five farmers to a consortium of 4, 000 farmers and boasts an 11, 000 CAS facility. In the last seven years of the company's existence, farmers have seen an increase in net profit of between 15-60 per cent. Khurram has clearly created a dent in the apple industry.

Tackling the root cause – Root2fruit

While Harsha Naturals was picking up, there was a lot more to be done, something that Khurram was always aware of. Khurram says,

Post-harvest is only the tip of the iceberg. The real problem is the pre-harvest, which if tackled well, can transform Kashmir's economy. Our apple yield is just one-sixth that of the US or Europe.

His idea was to increase the yield four fold and double the quality, so the farmer's revenue increased six-fold. So, sometime in 2012, Khurram joined hands with Dr Abdul Ahad Sofi, Kashmir's first doctor in Pomology who headed Central Institute of Temperate Horticulture (CITH). Dr Sofi handpicked a team of 20 experts who researched for two years across Europe to identify new orchard varieties that would suit Kashmir's agro-climatic conditions. In 2014, the team set up a two-hectare model orchard in Kokernag village with eight different varieties of apples.

Khurram proudly says, “In just a year-and-a-half, we have our first harvest. Under normal circumstances, it takes at least a decade." Through Root2fruit, Khurram is helping farmers build high-quality and high-yielding orchards. At the moment, they are in a position to supply around 60, 000 trees and the annual plan is to establish 10 new orchards across the state so that farmers can see first-hand the impact, and how increased quality and yield is possible.

Khurram's love for numbers never left him, so he created an ERP solution under his brand, 'Farm2U'. It's a simple traceability concept connecting farmers and the buyers, infusing transparency. Khurram says,

If a Bangalore-based customer buys a 2 kg Farm2U pack, it will have a code, which can be entered in our online system allowing the consumer to understand the farmer's geographic location, contact details as well as how much money he made from the sold pack.

It boosts the farmer's and consumer's confidence in us, leaving no room for corruption.

To make Harsha Naturals, a 360˚ solution, Khurram also started InnoFinance – a farmer-centric financing model that works in a tri-partite setup comprising the farmer, bank, and the organisation.

It is clear that Harsha Naturals has introduced a series of innovations and is in the middle of reviving Kashmir’s apple industry. But what sets this one-stop shop apart is the flexibility it offers – farmers can chose one or all solutions.

Khurram’s impact on the apple industry

Thanks to Khurram's introduction of CAS facilities, three more units have sprouted in the last few years (all initiated by local entrepreneurs), totalling the capacity to 22, 000 tonnes. But what Khurram is actually doing is setting up a world-class facility that can be replicated in other states such as Himachal Pradesh, the second-largest producer of apples or any fruit and vegetable industry nation-wide. Khurram says,

In the US, 90 per cent fruits and vegetables go through processing facilities whereas in India, it’s less than one per cent.

Many lessons along the way

One can’t let Khurram leave without him giving us a few entrepreneurial lessons. So here they are –

Meet Amir Hussain, the captain of Jammu and Kashmir para cricket team, who has no arms but lots of guts