Kumari Shibulal on changing the lives of underprivileged children through education 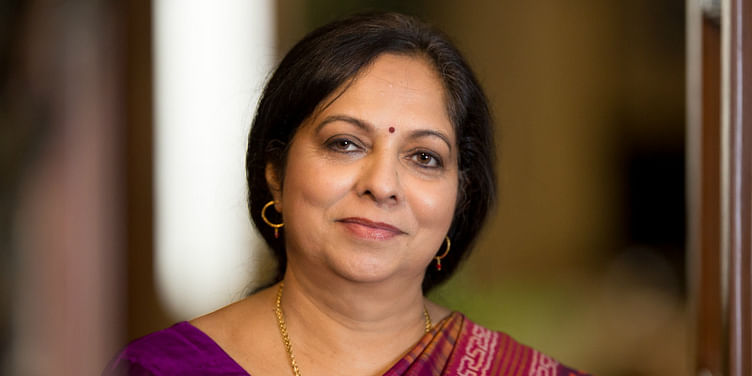 Kumari Shibulal knew the importance of education from a very early stage in her life. Born to farmer parents in a small village, her brother and her studied in local schools as their mother greatly stressed upon the need to get an education. This early understanding of the power of education made Kumari found Sarojini Damodaran Foundation in 1999 and Advaith Foundation in 2004. She is also the Trustee of the Samhita Academy, which was started in 2007.

One hot afternoon in Bengaluru, I sit with Kumari at her office and listen to her talk about her life and the many children who she now see as her own.

Born into a middle-class family in Ramamangalam, a small village in Kerala, Kumari studied in the village school a few kilometres away from her home.

For her PUC and graduation Kumari moved to Cochin and did her BSc. Physics from Kerala University, Cochin. At the age of 24, she got married to S.D. Shibulal who is former CEO and Managing Director of Infosys and one of its seven founding members.

The early days of Infosys

After marriage the couple moved to Mumbai and thereafter they continued to shuttle between India and USA for many years, while Infosys was finding its feet. As the wife of one of the founders, Kumari was privy to the initial struggle in setting up the company. She says, “We put in money into the company and at one point in time we had to pawn my mangalsutra too. The founders were putting all the money into the company and drawing minimal salaries. There was initially a financial crunch but all the suffering and hard work paid off.”

The couplemoved back and forth between India and the US in the early eighties right upto the mid nineties. During this time, their daughter was born in India and son in the US.

The couple have always had a strong inclination to lend a helping hand to those who needed it. Over the years, as they became more comfortable financially, they decided to focus on education.

Started with a vision to transform lives through education, Sarojini Damodaran Foundation supports

meritorious students after their Class X to further studies, by providing them scholarships across Kerala and Karnataka. The programme, Vidyadhan, has awarded more than 5,000 scholarships to children, till date.

Kumari herself travels to interview the kids every year. Initially she started with two children but as more and more children and their parents have come forth to ask for support they had to put a process in place and set up a selection process to choose the very best.

From funding the education of these underprivileged children and turning it into a self-sustaining model, the foundation decided to let others who desired to support the children to do so not just financially but also be invested in their life. So all the children who do not find sponsors are funded by the Foundation.

Making it an equal world

Under its programme Ankur, Advaith Foundation has provided residential education to about 123 students at The Samhita Academy, where Kumari serves as a Trustee.

Kumari says that they never planned to start the school but when she realised that the children were being differentiated in the different schools they were studying it disturbed her. “I wanted them to be treated like my own children. When I saw that was not happening we decided to start our own school where the children would not face any discrimination,” Kumari says.

With the Vidyadhan scholarships, they observed that there was a huge drop rate when the kids reached the age of 14-15, as parents began to look at them as breadwinners. Also, in Kerala only 40 percent of the girls were making it to school and in most other States the number was even less. So, to promote education among the girls and to ensure that the children do not drop out they decided to start the Samhita Academy.

They plan to reach out to 1,000 students every year through five schools. The Coimbatore school was launched last month, and in the coming years they plan to open four more.

Every child matter, every story counts

For Kumari each of these children count. She follows their life and their growth keenly. “A lot of the kids who are now well placed have come back to support other children,” she says.

“We have ensured that kids in school have a good weekend with movies and outings so they do not feel that they are deprived of anything in life. We have experts who are dedicated to help children make better career choices, understand what they want to pursue and in the case of the school I myself have a hands-on approach to deal with any issue.”

Growing up with an agricultural background, organic farming is a matter close to Kumari’s heart. As her own parents were farmers, Kumari likes to do farming too in her spare time. She runs a store in Bengaluru below her office that houses an array of organic products. She has also instituted the Akshaya Sree awards for organic farming in Kerala. The 61 year old is actively engaged in philanthropic work, which is spread across education, healthcare, maternal nutrition, pension schemes, and organic farming.

In the coming years, her hands are going to be full even more as they plan to start Vidyadhan across more States in India and increase the number of schools to support more children early on.