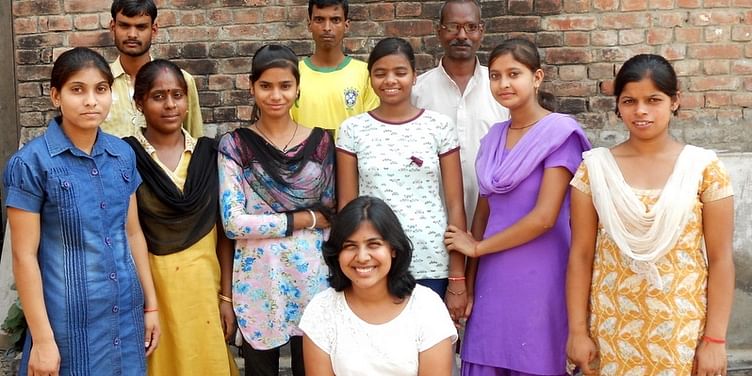 The purpose of art is washing the dust of daily life off our souls.

When 23-year-old Navya Agarwal returned to her hometown Sitapur, a small, not-so-developed town around 90 km from Lucknow to focus on her final project, little did she know she’d never go back to explore bustling cities and an exciting corporate life. A product design graduate specialising in wood, Navya founded I Value Every Idea (IVEI) three years ago (2013) –

with a hope that every idea will find its rightful place in this world, if it is built upon in the rightful manner.

Recalling the days before she decided to start IVEI, Navya says, “I identified four carpenters and asked them to create miniature versions of what I eventually wanted them to make, just to be convinced of their skills. But the end products were so perfect that I was pleasantly surprised at their mastery of traditional techniques without relying on modern machinery.”

Throwing light on why these people remain underemployed, Navya says,

Lack of exposure to the ever-changing urban markets, which are the biggest buyers, an inability to continually upgrade their skills – mainly due to monetary deficits, which force many to see their handicraft skills as an alternative employment – and finally, difficulty in finding a regular flow of customers/markets were the main underlying challenges in Sitapur.

A look in to India’s handicraft industry

Despite being one of the largest employment sectors, with nearly seven million artisans and 67, 000 export houses, a majority of artisans in India predominantly belong to the weaker sections, and work in some of the remotest areas of the country requiring upliftment, training and access to markets. Prime Minister Narendra Modi even launched the ‘Skill India Mission’ to tap the huge potential of artisans under its National Skill Development Mission.

There are a few large players such as Fab India, Mother Earth, and Dastkar Bazaar who continue to do significant work in the upliftment and preservation of rural crafts. And then there are smaller, countless initiatives, just like IVEI, which are sprouting and flourishing across the nation. For instance, Sujani Looms is reviving Bharuch’s dying 150-year old Sujani art by venturing into home décor. Indore-based hand painting design studio ‘Rang Rage’ employs housewives to paint on apparel, home decor and accessories. ‘MORA by Ritika’ works with textiles in the North-East. A number of e-commerce websites such as iTokri, Gaatha, Jaypore and Craftisan work with artisans and craftsmen everywhere, teaching them new skills and designs suited for the urban market. In a nutshell, the vibrant handicraft industry is here to stay, be it through the Government of India, physical and e-commerce ventures or women like Navya, who are keeping the hope alive.

Navya decided to start small so that she could address the gaps successfully. In 2013, she took a loan of Rs 3, 50, 000 from her father and founded ‘I Value Every Idea’. Initially, she faced scepticism from the craftsmen. She says,

They almost rubbished the idea of a 23-year-old girl teaching them new ways of working and innovating. So, I started going to their workshops and opening their minds to new designs, giving them tips – basically handholding them. Once they saw the potential they had, they were willing to learn. In fact, some of them came to me and said if I taught them, they’d work for me for free; such was their passion and eagerness to experiment.

She set up a small workshop with a team of 12 craftsmen, including a housemaid who used to make wooden bangles, a young girl who loved mehendi designing, all of whom came purely through word of mouth. Navya would give the wood workers the basic designs (such as coasters, pen stands, wall clocks, trays, and snack bowls) and once the products were ready, they would go to women who’d design on them using acrylic paints, broken bangles, and crochet. She slowly started improving their skills. But the next big question was how to market the products.

Bengaluru’s Sunday Soul Sante was her first stop. She says,

Our sales were just Rs 20, 000. In fact, I incurred losses. But you know what, it’s ok. The response mattered more. People appreciated our products, which meant we were somewhere on the right track.

Post this, IVEI received its first order from Kuku Crate – a startup (now shut) working in the space of DIY products for children. It was for 100 Mickey Mouse-shaped clocks, which could be painted by children. “Our cost price was Rs 100 and we sold it at Rs 110”, laughs off Navya. But Kuku Crate gave Navya the idea of tapping the untapped.

She says, “The mistake I made was running behind big orders. But after Kuku Crate, I started approaching boutique shops.” In less than a year, IVEI products were housed in exclusive shops across Bengaluru, Chennai, Hyderabad, and Mumbai. Word slowly spread and more orders started pouring in. Then came the life-changing moment for IVEI – in 2014, they received an order for 500 whiteboard calendars from Delhi-based Ecosense. The project gave her good profits, which she shared with her team; it also put her on the map, and IVEI was able to tie up with e-commerce players such as Flipkart, Snapdeal and Amazon and also get corporate orders.

Today, Navya has 18 full-time craftsmen working with her and each of them, earn Rs 60 per hour, which she says is more than enough, as earlier, these people would earn a meagre Rs 200 per day. They make a range of products – corporate gifting, home décor, DIY and personalised gifts. In the first year, IVEI made Rs 1, 00, 000 in revenues, an amount that could dishearten anyone, but Navya worked tirelessly. Last year, the team clocked a revenue of Rs 18, 00, 000! She says, “It’s a very big amount – something that none of us in the team ever saw coming. It has boosted our enthusiasm to dream bigger.” When asked to share a few learnings from her journey in Sitapur, she said –

By the end of this year, Navya is looking at increasing her team strength to about 40 craftsmen. But most importantly, she says,

I want my team to continue finding joy in what they are doing. In the end, that’s what matters the most.