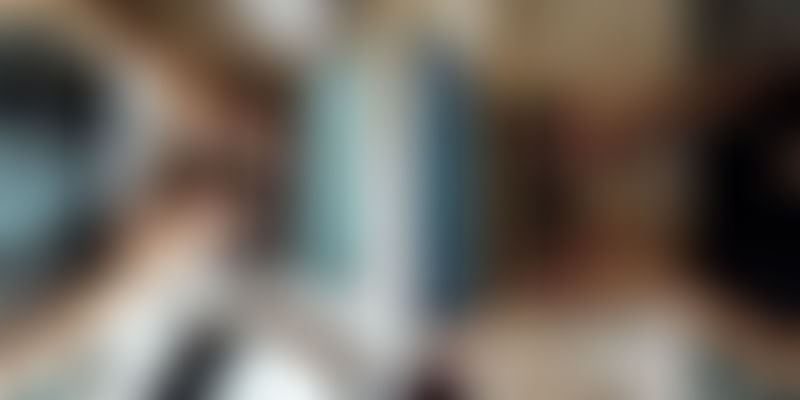 Back in 2012, while I was soaking in the amazement of the famously bustling lanes of Brighton, amongst all that graffiti, cafes, pubs, stood a building called ‘The Skiff’. Wood and glass design elements with a minimalist aesthetic sparked my curiosity. Lucky enough to get a tour of the place, I discovered that it was a co-working space. The energy of the place fed on the eclectic mix which housed the space: designers, lawyers, bloggers, tech junkies, mothers who were working from home and needed a professional setup for a certain part of the day, and startups that needed office space. Right from the basic amenities of a desk, printer, fax, and Internet, there was a pantry for the grumbling tummies, meeting rooms for those who needed to present to their clients, and lovely camaraderie all around.

The year 2012 was also the time when startups had finally arrived in India and I wondered why co-working spaces hadn’t come about in our country.

Amit Prabhu Kumble and Ankit Sonthalia had the same doubt when they had taken a desk to work at a friend’s office. The duo recall,

The amenities were bare minimum with one conference room, which was always occupied. The floor above was a fully-furnished office as well but had been vacant for months. We used to always wonder why somebody would wait for months together and prefer long-term lease that is so difficult to get by, especially with a 10-month deposit clause. If offered on temporary basis, we would have occupied larger desks at that office without a second thought and could have had access to more meeting rooms. We wondered how many such properties would potentially be lying ideal at the moment to attract long-term leases. We ended up taking calls from our cars with headphones plugged in. At that point of time, hiring con-call machines in a meeting room was available in selected business centres but they were very expensive. Even if a critical meeting needed the facility, the booking was not seamless - telephone contacts were not reachable or availability was not known.

Having experienced the problem first hand, they saw an opportunity in the solution, and founded ‘Space for your Need’ or ‘Sneed’ as they call it, a platform for discovering co-working spaces in June 2015 (operations began in December 2015). Amit, 37, and Ankit, 33, are both chartered accountants who have previously worked for large MNCs.

Amit says that small enterprises, startup, and freelancers have few options to work from. It is a fact that regular office spaces involve large fixed costs, investments, and deposits. Corporates, globetrotters, and telecommuters who don’t have deep pockets are often unable to find viable spaces to work/meet whilst travelling.

Ankit adds, “We are helping users find spaces that they need for their everyday use – open desks and private cabins as offices, meeting rooms and training rooms within their budget.”

On the Sneed platform, a user can find desks, private offices, meeting rooms, and training rooms. Users can book any of these for as short as an hour as well. The platform allows users to book and pay for spaces by searching on parameters of location, type of seat, and duration. While the platform does not buy inventory from the space providers, it helps them manage their workspace - seat and room inventory, promote their space, manage pricing and bookings. Sneed does not manage any of the facility management aspects at this stage. However, for new workspaces, it usually acts as the exclusive online marketing partner to reach out to users and help sell their seat inventory.

It doesn’t come as a surprise when the duo say that they chose Bengaluru, the startup capital, as the debut city for Sneed. Other than the fact that Bengaluru is home ground for the co-founders, Ankit adds, “It has one of the fastest growing co-working culture and is a city that is very welcoming of technology in every sphere.”

Amit handles customer engagement and lead management, finance, and expansion while Ankit oversees marketing, product design, technology and content management. Sneed is a lean team with a business development manager and two interns. The tech aspect has been contracted to a third party.

There are a couple of other sites to find co-working spaces, such as ‘BreathingRoom’ and ‘My Cute Office’, both of which are not based in Bengaluru.

About four months back, SNEED had about 40 unique spaces to choose from which has now grown to over 100 locations and 5000 + desks. Amit adds, “From the time we started, where we had to reach out to the space providers and convince them of our abilities, to now, where space providers are reaching out to us when they launch a new center.”

Ankit adds that on the demand side, they gauge user interest based on number of unique visitors, search, bookings, value of deals inquired, and claim to be witnessing a 300% month-on-month growth.

Sneed is currently bootstrapped and has been fully financed by the co-founders. Sneed currently generates revenues from transaction charges levied on the space provider (Sneed charges a certain % of the transaction value that flows through its website).

Amit says that immediate and long term challenges are building a team to scale up operations, building the technology to improve user experience, increasing the user base, and scaling to other cities and funding. Ankit lists awareness and being able to bring about a change in how workspaces are perceived as challenges. Working through the challenges, Sneed aims to be the largest provider of alternative workspaces one day.