Rejected twice - the state of girls with deafblindness in India 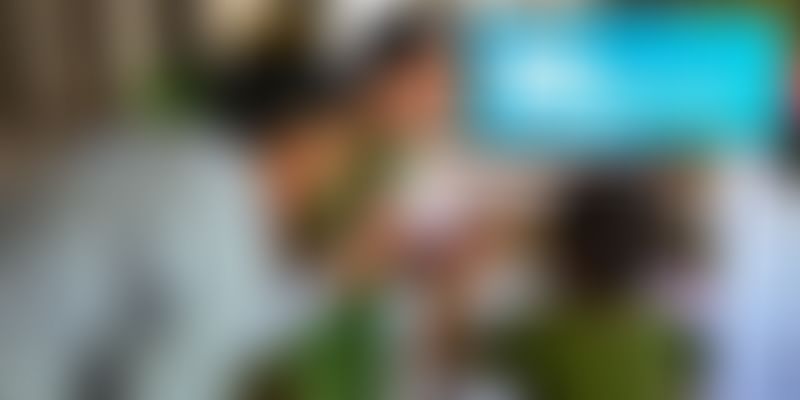 In India, a mother is considered divine. As her womb nourishes the next generation, she is worshipped akin to the Gods. However, in most parts of the country, everything changes when she gives birth to a girl. Celebrations, if any, are minimal. The mother, once considered a goddess, is mortal again and her baby girl, a burden. Can you imagine then, what it must be to give birth to a girl with a disability? Especially one as complex deafblindness?

Hansa was born profoundly deaf with little vision, a baby unlike what the villagers of Dhanki in Gujarat had ever seen. Ignorant and full of fear, they concluded she was a curse from the Gods and shunned the baby and her family. Hansa’s parents, humble daily-wage laborers, were branded as bad luck and were refused employment in the fields; excluded from society. To escape some of the agony, Hansa’s parents began dressing her up like a boy.

But today, Hansa is a strong, independent young woman. She runs her own petty shop, where those who once shunned her are her regular customers. She recognises currency, counts and dispenses it. She earns between Rs 8000–9000 a month and supports her family. Hansa’s journey is remarkable.

None of this would have been possible if Sense India’s special educator Deepak bhai hadn’t intervened. A male educator training an adolescent deafblind girl, he broke every stereotype and overcame every fear by including her community in the training process. Hansa reciprocated to all the support she received and grew stronger into the fearless woman she is today.

Shazia Fathima is another shining example of how access to the right resources, can overcome all barriers regardless of gender or disability. Born with Congenital Rubella Syndrome, Shazia had both her cataracts removed at birth and a heart surgery before she turned four. With profound hearing loss and very little vision, Shazia had no idea how to communicate with her world. Poking her eyes, flicking fingers, throwing tantrums, all attempts to reach out to those around her, were perceived as behavioral problems.

Today, Shazia has moved beyond the confines of deafblindness to being an independent, responsible young citizen. Last week, she cast her vote in the Chennai assembly elections for the first time. Although she was on holiday, she returned to Chennai for a day to be among the early voters in her constituency. Shazia can spell, knows sign language; loves SUDOKU and the planetarium. In-between studying for her 10th boards, she unwinds by quilling and is spectacular at it! She has learnt all of this and more at Sense India’s partner organisation, the Clarke School for the Deaf in Chennai. Here, throughout her 16-year-journey, her special educators have worked tirelessly to ensure Shazia’s future is full of confidence and growth.Girls with deafblindness are almost always rejected twice. Once because of their gender and then because of their disability. A deafblind girl child is twice as likely to be isolated and rejected by the world she is born into than a deafblind boy. She will possibly live her life never learning how to walk or communicate basic needs like hunger, thirst, or fear. You can change this.

Lend your voice to Sense India’s campaign #pedal4sense and raise awareness about deafblindness. Post a selfie or a video of you cycling and use the hashtag #pedal4sense; nominate at least two friends and help raise resources for over 5,00,000 deafblind children and adults in India. No matter where you are in the world, your voice will reach out to children and adults with deafblindness in the tiniest pockets of rural and urban India so that they, too, may live fearlessly like Hansa and Shazia.