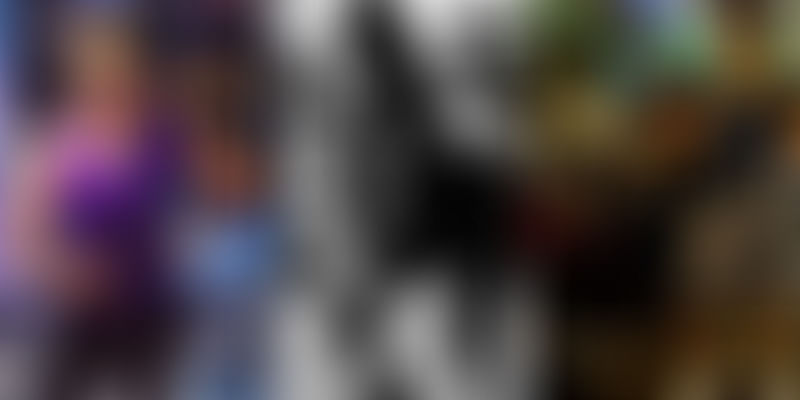 She was an exuberantly body-positive soul, if I ever saw one. At 5’3”, she stands with her shoulders thrust back confidently, armed with a knowing sort of half-smile that communicates she was acquiescent and at the same time, someone you don’t mess with. Speaking with her, it is evident that she had spent her life celebrating her body like it was her birthright, so her drive to get into shape clearly didn’t stem from a frivolous urge to simply adhere to a prescribed beauty standard. There had to be more to it. And I was right – it was about finding another, positive obsession to consume her, where the drug abuse, and lack of purpose living a life as a corporate slave, had left cavernous holes.

23-year-old Nilparna Sen begins at the beginning. “I was brought up in Surat, and moved to Mumbai to pursue a career in media because ‘people told me’ I was meant for something like that. People also told me to go for an MBA degree. I joined as a marketing executive at a leading jewelry brand in Surat, became a client-servicing slave, who types awesome e-mails and makes awesome deals. I always knew that it was never something that I will give my heart and soul to, but what the hell, I didn’t know what else I was good at. This lack of passion, interest, and meaning to my job made me seek out other things for pleasure, like smoking, drugs, etc.”

Her life became a cycle of self-destruction. She dragged through the week for that one party on the weekend where she would completely destroy herself with not only the usual alcohol and cigarettes, but some pretty hard drugs.

“I would miss my shifts, never be on time to work, until a phase came when drugs were consumed in such HIGH quantities that my brain was barely functional. This was the point when they stopped being interesting. There had to be something more to life.”

Find what you love, and let it kill you

It was a day like any other, when she took up a gym membership, because she wanted abs just for the thrill of it. “I followed the steps required, and saw my body morph into something I never thought was possible.”

Her training taught her a valuable life lesson – results were directly proportionate to the effort one put in. “Very soon, I found myself ridding myself of any habit that would get in the way of my training. It began with me resisting the urge to hit the snooze button, refusing junk food, and that glass of whiskey or line of cocaine at a party. That soon spilled over to all other areas of my life. I resisted slacking off at work and started studying for my CAT exam.

It all simply meant that I was resisting being mediocre, like I had all my life.

By then, the burning inferno within to rebuild herself stopped being just about getting abs or about becoming a regular skinny girl. “I decided to make this transition more impactful and ever-lasting. I had started to put on muscle. And the energy and strength that I felt in my body was a whole new beast. It was electrifying to know that there is no end to how far I could go with my true physical potential.”

She started training six days a week and minding her diet right down to the gram – a practice which she paid a fat price for when she didn’t have a proper coach to guide her at first. “I took extreme measures initially to get leaner. I dieted down so hard to ‘get abs’ that I developed an eating disorder.” It was Kaizzad Capadia, the founder of K11 Institute of Fitness Sciences, who encouraged her to enter the world of ‘strength’, rather than ‘shape.’

“That’s when I decided that I had to take a larger view of fitness and had to be more than just skinny.”

Nilparna does both powerlifting and bodybuilding, but is currently focussing on body-building style high-volume training.

The road not taken

The fork in the road came when her CAT results came out. She scored better than she had expected, but knew at once what the right choice for her was. “I dropped the whole MBA idea as getting physically stronger had changed me. I felt obliged to give something back to it. So there it was, my leap of faith.”

With this newfound clarity, she decided to formally become part of the fitness industry. “I took a course in training and nutrition, and started out as a Fitness Coach in Surat at KG Fitness. I knew I had to spread the message, especially to women.”

Why women? “Men have always bought into the thrill of getting stronger, not much work needed there. Women, on the other hand, shy away from it, and fail to make it a priority. But the quality of their lives would skyrocket when they stop depending on their husbands for little things, for they’d feel much more in control of their bodies.”

Shifting her focus to women paid off. “Almost all of my women athletes are lifting more weights than their husbands. As a coach, nothing makes me happier!

I’m building my league of extraordinary not-so-gentlewomen right now, one woman at a time!

Her relentless efforts were recognised by her gym, as they declared her the Training Head at her fitness centre.

Her day starts as early as 4:30 am. “I cook my meals for the day, listen to something inspiring – usually a podcast, start coaching clients from 6 am to 3 pm, get in my workout from 3 pm to 5pm, coach clients again from 5 pm to 8 pm, go back home, study a little, because learning about nutrition and training never, ever ends, before I call it a night.”

‘So when in the day do you she wow your 4,000 odd followers on Instagram?’ I ask, as she blushes at the reference to her growing celebrity. She mostly uploads stunning pictures of herself slaving it out and dropping some heat on her body, while narrating a detailed and heartfelt account of how she works towards her goal, one day at a time. “It never started out as something that I wanted to use to market myself. I just realised sharing my story may inspire the people I knew to take wiser decisions about their life. I had stopped socialising and wasting time. So, Instagram was my outlet to reaching out to people.”

Speaking of the untapped physical potential of women, Nilparna wants to take on every physical challenge that a woman is capable of. “Let’s say bodybuilding is one, where you have to push yourself to gain the maximum possible muscle gain and lowest fat percentage, both of which, I would add, is very difficult for a woman. It is the sport of aesthetics, where one literally has to take control and design their own body. So, I’m currently gaining mastery over the art, science and discipline of bodybuilding to set an example of what can be done with a woman’s body aesthetically.”

My vision is to produce a league of women who are bodybuilders, lifters, and runners, who will be an example of how fitness is so much more than just being skinny.