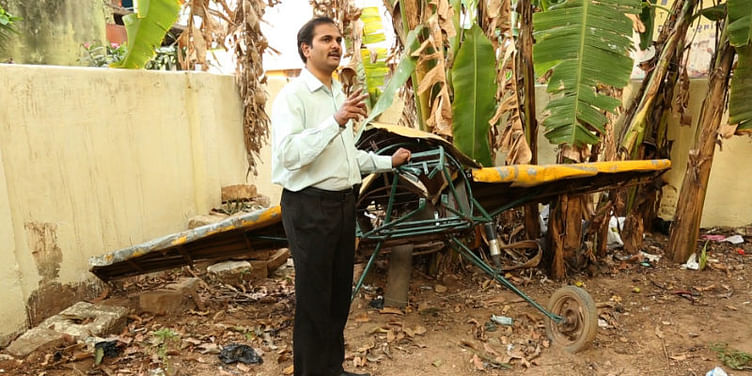 It is a small, dingy room without a window. The lone bulb is the only source of light here. Thirty-five-year-old Mohammed Muzzakir Sharieff toils away without caring if it is day or night. For the past 10 years, this has been his laboratory.

The makeshift workshop in his mother’s house in Bengaluru’s middle-class area is where he spends most of his time, at times even going without food. The result: he has made electric bikes for kids and adults. He uses one bicycle to commute and is now making an improved version of it.

If no one joins you, walk alone

Muzzakir’s mission is to make a cheap, electric bicycle for the common man, just like Tata's intention with Nano. But his bigger dream is to have a state-of-the-art R&D centre one day, where anyone with an idea to create and innovate can use it.

“I have faced so many difficulties while building these bikes. There was no financial or technical support. No guide or mentor,”

says Muzzakir, when I meet him at his house.

“Most of the times, he is away in his workshop and does not return for days together,” says his wife. She does not complain because she is the only one in the family who believes that one day her husband’s efforts will be recognised, and he will see success. “We just need someone who believes in our vision and can support his project financially,” she says with a smile.

There’s no hint of desperation in her voice, unlike that betrayed by his mother, sister, and brother.

“All these years, they have only seen failure. I make something, there is a little buzz around that and then everything goes back to being the same,”

says Muzzakir in their defense. His mother helps him with a small amount every month, which he uses to fend for his family as well buy bits and parts for his innovations.

Muzzakir is definitely the maverick among his two brothers and two sisters. There are occasional protests, concerns, and suggestions that he pick a job in the Gulf to keep his wife and nine-month-old daughter happy and well cared for. But, for the most part, his entire family just lets him be.

Muzzakir has travelled too long on this road less taken to turn back now.

He once held a job at Hindustan Aeronautics Limited (HAL) but gave it up because he realised he could not keep his creativity locked in the 9 to 5 box of a daily routine. Incidentally, how he landed the job in HAL is in itself an interesting story.

“When I was in my second year PUC (class XII), I failed most of my papers and had time to kill. While going through some books, I thought why not build my own microlight aircraft,” he tells me, recalling that exciting phase of his life.

And he actually did this from his room, secretly bringing in parts from the neighbourhood junkyard and assembling the plane with his older brother’s help. “I ripped the engine from my father’s Bajaj scooter because I could not think of anything else,” he tells me standing next to the remains of the same aircraft that lies crumbling in his backyard.

Muzzakir had achieved this feat without any technical know-how or monetary support, and inevitably moved over to the other side where the only driving force is a combination of passion, persistence, and hard work without any guarantee of success.

His maiden adventure did not go unnoticed. He became the ‘whizkid’ who had single-handedly built an aircraft. News reached APJ Abdul Kalam, who sent his emissaries to look at the boy who had made an aircraft and offer him a job in HAL. “Abdul Kalam sir sent a note to me saying that he was very proud that a school boy had achieved this. He had wanted to build one in his school days too,” says Muzzakir with visible pride.

Muzzakir worked at HAL in the helicopter division for a few years. While there, he became obsessed with optimising the gear box that is used in the tail rotor blade, which, he says, is considered a ‘necessary evil’. “I started spending hours after office trying to work on a new gear box. As a result, my health deteriorated. I could not focus on the desk job and slowly people started talking about how I was just a one-wonder boy,” he says. Of the decision to quit the organisation, he adds, “I was bubbling with excitement and creative ideas but felt constrained there.”

Muzzakir then decided to complete his engineering degree instead. While in the final year, he built another microlight with some batch mates, but that too met with the same fate as his previous project. “Students now play cricket and football around it and it too lies forgotten and neglected,” he says.

Muzzakir realised that his life’s purpose was only to build and innovate, and after he graduated he made electric bikes for children and even managed to sell some. But today, he is obsessed with his vision of the common man’s electric bicycle. “Look at the pollution we are causing. There will come a time when petrol prices will hit the roof. People are bound to look for alternatives,” he says.

“Yeh itna kho jate hai apne kaam mein ki kitni baar welding se inke shirt aur haath jaal gaaye hai (he gets so engrossed in his work that he does not care about the sparks from the welding machine burning his clothes and arms),” his wife, Salma, tells me. She says when the proposal for marriage came, she had immediately accepted it, because “I had heard that he was a genius scientist. I am a BCom graduate, though I would have liked to do BSc. Not many girls chose that stream in my town (Raichur) then and I was told by my family to stick to commerce where there were a few girls.”

However, the couple is sure they want to see their daughter grow up to become a scientist. Salma says,

“One day, she will be a NASA scientist, and you will have to come back to interview her.”

I smile nodding my head in agreement, and wish that by then we as a society would have evolved to be able to value the genius of a common man or woman.