The mastermind who invented the cheapest and fastest device for determining your resistance to antibiotics, almost didn’t get to pursue higher studies 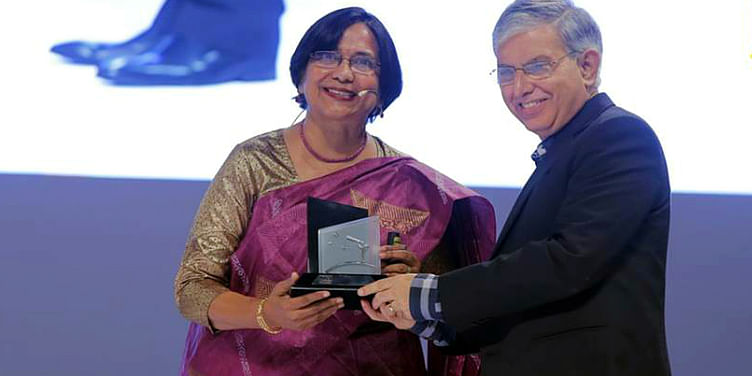 Had the tug of war between the Marwari-custom of girls marrying young and her yearning for knowledge swung any other way, it would’ve cost our country a pioneering mind and a path-breaking innovation that is going to become a household fixture in the medical landscape of our country, in the years to come.

From resistance from her filial ecosystem…

Born to a Marwari business man, 56-year-old Suman Kapur completed her schooling from Cambridge School, New Delhi, and her B. Sc (Hons) degree at DU’s KiroriMal College. “As a National Science Talent Scholar, the sailing was smooth in terms of admissions to the best schools. Securing admission into AIIMS also helped mute any opposition at home. The biggest challenge came later – the tug-of-war between an early marriage and the five years it would take to complete a Ph.D degree.”

Unfazed by custom of women not pursuing higher studies within her community, and with some help from her biggest ally, her mother, whose dream was to have a “doctor” daughter, she overcame early barriers to complete her Masters and Ph.D degree from AIIMS, New Delhi.

“A woman taking up a mainstream job was unheard of in Marwari business families. But, an opportunity to accompany my husband to the US came as an opportunity to train further in the area of advanced Molecular Biology and Biological research.”

She left for the US in 1987, and enrolled for post-doctoral training at University of Minneapolis, followed by the University of Kansas Medical Center, and was working as an assistant professor at the H. Lee Moffitt Cancer Center, University of South Florida, when she decided to return to India and serve her country.

To determining resistance to antibiotics

Once, when she was unwell, it took doctors a full month to diagnose that it was residual infection from a recurrent urinary tract infection that was not responding to the antibiotics being prescribed. “I thought to myself, we should have a way to assist the doctor to take precise decisions for a better outcome of treatment. I have seen several women suffer from chronic conditions due to failure of drugs prescribed to them or wrong drugs prescribed to them,” says Dr. Suman.

The opportunity to both solve this problem and be an entrepreneur presented itself when she developed a rapid method to conduct antibiotic susceptibility assay as an outcome of a DRDO-sponsored “project for product”.

The technology developed by Dr. Suman and her team was truly disruptive in that not only did it work better, it is also highly competitive in terms of both time and cost. “If the technology had to reach the masses and not die at the hands of bigger players in the market, the only way out available to us was to take a plunge, which we did.” This led to the birth of xBITS.

Being a professor at BITS Pilani, her co-founder, 36-year-old Anuradha Pal, was also a graduate student in the lab and had been associated with R&D efforts from the beginning. BITS Pilani Hyderabad transferred the technology to their incubator firm Xcellance in Bio-innovation and Technologies, Pvt. Ltd. (xBITS) for commercial production.

“Collectively, we share the dream of making this technology available to all healthcare facilities in India and other developing countries. We are a team of an intelligent bench workers combined with a visionary leader, who works round the clock to improve the challenges of women, pregnant mothers, and close to a billion Indian village dwellers who have very little access to quality healthcare services,” says Dr. Suman.

The most important value that RightBiotic of xBITS brings is the “correct” prescription of antibiotics from the very start of treatment, and putting an end to the practice of “best guess” treatment with empirical use of drugs.

Antimicrobial resistance (AMR) has been referred to as a ‘bigger threat than terrorism.’ “Our mission is to raise awareness on evidence-based use of antibiotics to avert the apocalypse of antibiotic failure, which is going to make common treatable conditions untreatable, and common scratches and cuts, fatal!”

Nearly 10 lakh people suffer from urinary tract infection in India daily. All these people need this test for specific treatments from the moment they are prescribed drugs. More than half of these are women, who are six times more likely to suffer from UTI than men. Untreated UTI in pregnant women leads to low-birth-weight babies, miscarriages, and even eclampsia. Urine is one biological sample that cannot be shipped to aggregators and needs to be tested within four hours at the point of collection itself. RightBiotic is portable, and all these patients will be helped by availability of RightBiotic in primary health centres and every doctor’s clinic, lab or hospital. The antibiotic sensitivity of pathogens found in human biological fluids and tissue scrapings will be tested on these devices. It comes with a ready-to-use kit that can provide results in a couple of hours as against the normal wait-period of two-three days for a sample to be cultured and tested in any lab.

The need for RightBiotic is there even in developed nations as failure of antibiotics led to a loss of $29 Billion in deaths and $35 Billion in healthcare cost in the US last year.

All automated and semi-automated technologies used presently are imported into the country. At 80 per cent of the places in the country, the manual Kirby Bauer disc diffusion method is used, which requires dedicated infrastructure, trained manpower, and 72 hours to give the final results. With no Indian counterpart, their major competitors abroad are two multi-national companies Becton Dickinson and Biomeriux. The instruments sold by both these companies range between Rs 19 Lakh to 49 Lakh and the time taken is 24-to 36 hours.The opportunity was quite clear; however, the challenge was to build a steady team, a rigorous quality control procedure and obtain all required regulatory approvals. “Unfortunately, India is still developing guidelines for indigenously developed medical devices and all procedures at CDSO’s office pertain to import of devices from outside India.”

A healthcare facility may buy their optical reader one time and use their kits to test each sample received for antibiotic susceptibility to bacterial pathogens. The kits, which come with antibiotic array capability, allow the purchase of appropriate test suites, for e.g. for pregnant women, for children, and all others. “We are even open to providing the hardware for free in case a centre processes a large number of samples using a considerable number of kits on a monthly basis. The business aims to work with the government agencies to make this facility available in all government-run healthcare facilities,” she says.

With every installation, they expect a consumption of 1,200 kits per month and aim to install 20 machines by the end of this year. If all goes well, this number will rise to 50 installations in India leading to a consumption of 60,000 kits and a revenue of Rs 0.34 million by second quarter 2017.

India alone has a total addressable market of over 5 lakh primary healthcare centers, 1.5 lakh doctor’s clinics, 1 lakh diagnostics labs and >1.5 lakh hospitals and maternity centers. “With just 3 per cent market capture, we have a TAM of 234.6 million UTI customers, served by 2,743 outlets generating revenues of Rs 9.60 million/year. With 50 installations by the end of 2017, we plan to grow to 200 installations by 2018 and 500 installations every year thereafter,” she explains, of scaling and expanding their reach.

The greatest trail of spirit in Dr. Suman’s career was the downright incredulity she received, being a woman technocrat and entrepreneur. “After every presentation, the question put to me is ‘who has been the innovator of this technology?’ And when I answer ‘Me,’ the second question sure to follow, is ‘Are you even an engineer?’ When that answer is ‘No,’ all I get is raised eyebrows in utter disbelief.”

They have received support from Government of India in the form of grants-in-aid, and are looking to raise seed funding by June 2016.

The Ministry of Women and Child, Government of India recognised their achievement by honoring the Promoter of xBITS as one among the 100 women achievers and that too under the category of Science and Innovation. XBits also won at this year’s edition of Marico Innovation Foundation’s Innovation for India awards. Dr. Suman will represent xBITS in Silicon Valley and the TiEcon event in Santa Clara as a Women Entrepreneur Quest winner next month.