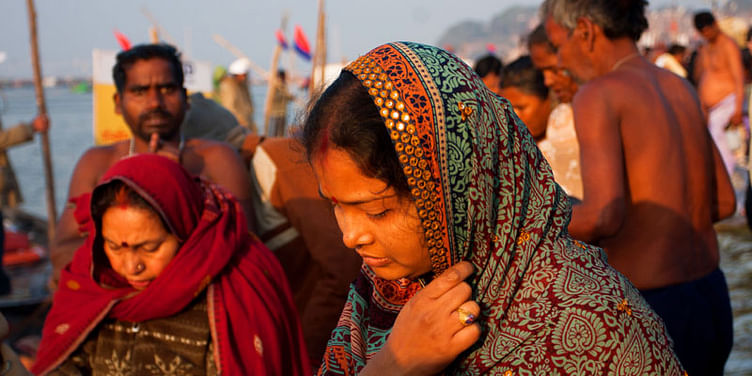 Bhagwati Bai sits on a chair in a white tent – her hands folded, her feet bare, her face shining in reverence. Outside the tent, there are people taking off their ‘chappals’ to wait for their turn.

Minutes later, Bhagwati emerges out of the tent, wiping tears of joy. For the first time in her life, this 40-year-old farmer woman from Ushapura village in Madhya Pradesh has seen the Mahakaal Aarti from a seemingly tangible distance. This despite the fact that bookings for the aarti at Simhasth Ujjain, 2016, have been closed now owing to the sheer number of pilgrims wanting to witness it.

How did a non-VIP village woman watch a prized religious ritual a million people would die for at this time?

This was possible through a 360-degree virtual darshan – a facility made available using Google’s Virtual Reality cardboard and Oculus Rift headsets.

Indore-based Twist Mobile, a mobile application development company, has launched TMVR – VR, an application that gives you a 360-degree view of the famous Bhasam Aarti of the Mahakaal Temple in Ujjain.

“We have erected 5'x5' booths near Simhasth premises to display Mahakaal on VR devices. We have developed an application called Twist Mobile Virtual Reality (TMVR – VR) of India which is available on Google Play Store for free. The Google cardboards are kept in hotels, buses, and shops in and around Ujjain, Dewas, and Indore,” shares Twist Mobile and TMVR Co-founder Virat Khutal.

“We have developed our own OpenGL 360 degree video player. It has taken us close to six months to shoot the videos of the temple with the right technology. We took permission from the Ujjain government and multiple government agencies to shoot and distribute this experience during the Simhasth Mela. And the experience has been so rewarding. We saw women and children taking off their shoes outside the booth, people crying and thanking us profusely for making such an experience available for free. For us, this is the most religious gesture we as entrepreneurs could make,” says Twist Mobile and TMVR Co-founder Dilip Awasthi.

The TMVR team has set up 20 stalls with 5,000 Google Cardboards and two Oculus Rift VR headsets. They had tested a pilot in Ushapura village near Ujjain to get the first validation and were thrilled by that experience. They became confident of introducing what can be termed as ‘virtual darshan’ for the first time ever in a Kumbh. Deputy Mela Officer SS Rawat adds, “With VR 360 technology, visuals of Mahakaal Bhasam Aarti will allow many people to opt for VR Darshan which could ease the crowd pressure at the temple premises.”

And just like all selfless acts, an initiative of this size and ambition couldn’t have been possible without like-minded partners. It’s a recorded aarti video that the devotees are watching, the streaming for 200 users has crossed more than 7 GB.

That’s when a noted Data Center provider comes into the picture.

“The streaming is data intensive. So when Virat shared this problem, we decided to provide free of cost live streaming solution for this service to accommodate video viewing,”

RackBank and Twist Mobile are sharing the server and bandwidth cost for the virtual darshan project of Simhasth. For the record, the VIP darshan price at the Mahakaal has reached Rs 250 per head while the usual darshan costs Rs 100 per person during the Kumbh period.

On the other hand, the State Government and the Simhasth Committee have not left a single stone unturned to ensure that technology empowers people at the Kumbh.

Apart from the online booking of Bhasam Aarti (that closed on April 22), there’s a mobile application called Simhasth Ujjain, 2016, on Google Play Store containing all the information, including helpline numbers and official contact numbers.

Moreover, there are more than 700 CCTV cameras and 3,000 loudspeakers for announcements installed within the premises.

The Indian Space Research Organization (ISRO) is currently monitoring the Kumbh on satellites from its centers.

Not only this, Akashvani is broadcasting Simhasth Darshan live from all the six zones through its Madhya Pradesh and Chhattisgarh stations for those who cannot visit.

The Health Ministry has provided a mobile tele-medicine van for devotees and saints at Simhasth. The van has facilities of BP and diabetes checkup, ECG, SPO.2, dermatology test, ophthalmology test, and X ray etc. AIMS Bhopal and SPGI Lucknow doctors are deployed in the van.

It’s a technologically advanced mobile health facility where doctors are consulted from far-off hospitals through video conferencing. There is a temporary 20-bed hospital and a 450-bed hospital too right at the Simhasth Mela area.

Health care startups are not far behind. Medd Co-founder Arpit Kothari shares, "We are giving away some preventive health checkups for Re 1 during Simhasth Kumbh. There are stalls near the venue. For instance, diabetes screening worth Rs 200 is given in Re 1. Along with partnering with Central Lab Indore, we are also trying to work with the government to get the facility to as many people and use the data for future policy decisions.”

To avail this facility, users need to download Medd application and register themselves. The application is an e-commerce platform for booking lab tests and scans.

On similar lines, Med108 application is making emergency healthcare easy for tourists. Co-Founder Prabhakar Singh says, “This app is useful to cater emergency healthcare to the visitors of Simhasth Kumbh; they can reach out to doctors, chemists, diagnostics, and hospitals etc. At the time of emergency, our 108/SOS services can be very helpful. Blood donors’ list will be an added advantage."

While the government has deployed 40,000 police personnel, 15,000 government employees and 10,000 NGOs/volunteers for crowd management, the cases of missing people or children cannot be ruled out.

Locate App Co- founder Pramod Pandey informs, “We have built IOT (small hardware) solutions to safeguard people and their belongings like car, wallet, and key chain etc in partnership with Linquet – an IOT partner of Locate. It’s a Canadian company that has collaborated with us to distribute their IOT safety solution during Kumbh. They are offering some special discount for Indian users on their cloud-based solutions to locate missing possessions.”

But how does one commute even within the 3,000+ hectares of Simhasth area? The government has deployed 500 e-Rickshaws. Then there’s InstaCar - an inter-town cab service from Indore which is organising special tours to Ujjain Simhasth.

"We are also taking our guests inside the mela premises since we have acquired permission for internal commutes,” says InstaCar Founder and CEO Ishan Vyas.

While there are hundreds of free food stalls that are supplying meals to the visitors, the cooking of this food is technology-intensive. The Kaal Bhairva Sector Plot no 60/1 is home to various kinds of high-tech cooking machines right now.

There are machines for grinding, making chapatti, cutting vegetables, and peeling potatoes. A flour grinding machine that costs Rs 1.25 lakh can grind 15 kgs of flour in a few minutes.

The roti-making machine costs Rs 4 lakh and there are four such machines here that can make 1200 rotis within minutes.

As for stay, apart from the various AC, non-AC and regular cottages available for guests, what’s truly attracting attention is the biggest tent that belongs to Junapeethadhishwar Acharya Mahamandleshwar Swami Avadheshanand Giri. It has been built in an area of 10 lakh square feet by 100 artists from West Bengal and Punjab.

Made of plywood and thermocol, this tent looks like a fort. There’s a 120 feet high musical fountain with garden. Around 10,000 to 12,000 people can stay inside this camp that has halls, performance auditoriums as well.

However, nothing can beat the ‘coded entry’ inside Swami Nityanand Maharaj’s stall where only the VIPs are allowed. There are 3,000 devotees in this tent from 50 countries, including Sri Lanka, Thailand, and Indonesia etc. The entry requires a mala (neckwear) that has a code along with an ID card and dress code. There are guards protecting this particular tent.

Then there are startups who are also worried about cleanliness at the Simhasth area. Radio Raja – a free on-call radio service for rural areas – has been spreading awareness about keeping the place clean.

Radio Raja Founder Abhiram Bhise said that for Simhasth Ujjain, 2016, they are backing up the initiative of "Clean Ujjain, Green Ujjain" with the thought to spread awareness among people coming for the holy dip in the sacred Kshipra river. “We wanted to connect with our audience with messages on environmental issues rather than merely taking on the traditional aspects of this occasion,” he adds.

Radio Raja is also taking the experience of Simhasth on radio by broadcasting modules informing about its significance, footfall and the various traditions associated with it.

Related read: How Indore is looking beyond commerce and cricket to reach for the ‘cloud’