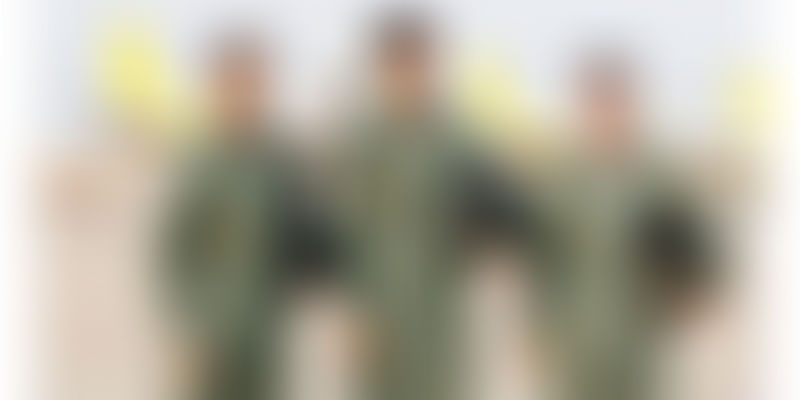 Even as the Indian armed forces continues to disallow its women soldiers into roles of combat, today, India will witness women take a giant leap towards the goal of securing the skies for their motherland. Today, on 18th June 2016, the Indian military will formally commission its first three women fighter pilots, to serve the country.

The three women who will be going down in the pages of history as the first ones to test their limits and those of the sky, are Flight Cadets Avani Chaturvedi from Madhya Pradesh, Bhawana Kanth from Bihar and Mohana Singh from Rajasthan. They are currently undergoing Stage-II training in Kiran Intermediate Jet Trainers at Hakimpet Air Force station in Hyderabad.

In October 2015, the government decided to open the fighter pilot stream for women on an experimental basis for five years. Since then, the three women in their early twenties that were selected from a batch of 125, have been undergoing grueling training – from 4 am to 10 pm for almost a year – in order to become the country’s first fighter pilots. After they graduate today at the Combined Graduation Parade Spring Term 2016, they will commence advanced training for another 145 hours, on advanced jet trainer Hawks, for nearly a year, before they would make it to the cockpit of a supersonic fighter.

“Fighter flying is combat flying, and whatever the institute requires from us, we will live up to it,” says Flight Cadet Bhawana Kanth, confidently, for whom, this was a childhood dream. This proud Darbhanga girl says it was “her dream to fly like a free bird” since her childhood, which “inspired” her to join Indian Air Force.

“We undergo the same training as our male counterparts, and it is exactly the same standards and the same hardwork that goes into it. After clearing my Stage I training, I got golden opportunity to opt for fighter stream, the best and the biggest thing that has happened to me and the best part is, it is just the beginning. It is my aim to become a good fighter pilot and fight for the nation and make my parents proud,” she says to The Hindu.

For Mohana Singh, though, a deep sense of patriotism and a passion for serving for the armed forces was inculcated in her early on, by her parents and grandparents, who also served for the country. “Joining the Indian Air Force for flying was a dream instilled by parents and grandparents,” she says. Her father is with the IAF and grandfather is still serving as a flight gunner in the Aviation Research Centre.

As for Avani Chaturvedi, originally from Satna in Madhya Pradesh, she was taken by the life of an officer after looking at the spirited journeys of the Army officers in her own family. She says, “Whatever challenge, whatever obstacle comes in front of us, any operations required from us, we are ready. Nothing is impossible, all you need is hard work and focus.”

“Dream big. Where there is a will, there is a way. Indeed there is – it will be created for you,” says Bhawna with assurance, in a CNBC TV 18 interview.

Even as combat roles in the Army and Navy are denied due to operational concerns and logistical constraints, the trio will fly sepoys and majors and script history while they are at it – one flight at a time.

Team HerStory wishes them all the best and salute their spirit!