[Bootstrap Heroes] The first Indian smartwatch, which you never heard of, is here 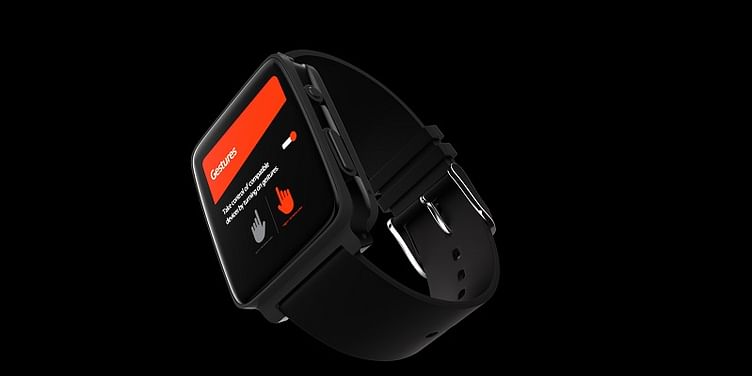 Raj Neravati had a high-paying job and a comfortable life in the US. Having spent 17 years in the IT industry, Raj was the Chief Operating Officer at Cigniti Technologies.

However, the Nirbhaya incident in December 2012, which shook the entire nation, pushed Raj to leave it all and look into women’s safety in India.

Initiating his startup plan in 2013, Raj realised early on that a mobile app would not be of any use during such situations. The need was to have something handy, and by January 2014, Raj had funded a team to build a solution. Six months into the project, he left his job to join the project full time.

Focussing on the lifestyle category, Raj and his team settled on creating a smartwatch, and Hug Innovations was founded in October 2014. Explaining the logic behind the name, Raj says that it came from the need to give the brand a positive and affectionate name, rather than one that highlighted fear. Raj, Founder of Hug Innovations, says,

We wanted to give a message that Hug as a brand was there for everyone, every day, almost like an extension to their lives. But the idea was to make it different than a smartphone.

According to Raj, the three functionalities that differentiate the product from a smartphone include personal safety, IoT gesturing, and integration with nutrition, health, or fitness regimes.

Most devices follow rules and guides entered by the user. But the Hug smartwatch gathers critical information about a user over time and runs machine learning algorithms in the background to make a base pattern for the user, based on his/her everyday lifestyle. Depending on this pattern, the watch guides and suggests the user. These could be small things like notifying you that you are late for lunch to guiding you what Indian cuisine you can eat from Indian delicacies based on your calorie intake.

As the device is fundamentally a watch, it always shows the time, but the wearer can customise the dials and watch faces.

The Hug smartwatch provides all the standard features of a smartwatch ‑ call management, dialing contacts, notification alerts from social media (WhatsApp, Twitter, Facebook, and LinkedIn), e-mails and news. The watch also provides a standard template of messages, which a user can respond with, in case he/she is unable to receive a call.

Added functionalities include heart rate monitoring, which through the use of artificial intelligence and machine learning algorithms alerts the user on an abnormality.

Giving it a twist

But what the creators really wanted was features that set the Hug smartwatch apart from other competitors. Therefore, they introduced gestures for virtual reality (VR). The watch acts as a game controller or a gesture controller when connected to the VR glass.

Raj believes that the real experience for VR is enhanced when the controls are touchless. The watch also connects to other Bluetooth supported devices like a Kinect or Bluetooth speakers to control and communicate with the connected devices through plain gestures. This addition of gesture control opens the possibility to other technology integrations including home automation.

One such used case explained is maneuvering parrot drones. This feature is also integrated with the Hug smartwatch. Moreover, being OS agnostic, the watch connects to any device since it connects on Bluetooth to your smartphone.

The concept behind this was to build a self-sustained community for safety, where people could help each other without relying only on police forces. The watch packs in an alert panic button, which sends an SOS trigger to the user’s friends and family.

The watch also alerts other watch users in the vicinity, sending an abstract identity of the user along with the exact location of the incident.

So what happens in case there is a false alarm accidentally triggered? Raj explains that the user’s smartphone gets a phone call asking their passcode. If for some reason the call goes unanswered or the passcode is incorrect after multiple tries, the system understands that the user’s safety is compromised.

The app for the watch is also customised to show the nearest coordinates of a hospital or police station in case of an emergency, along with the phone numbers and details of these institutions.

The computation is divided between the watch and the smartphone it is connected to. This in turn helps the watch save on battery life. Also, being smart about optimum usage, the watch can work for up to two full days on a single charge.

Just like a MacBook charger, the phone is connected to a magnetic touch charger to ensure the watch is plugged in for charge. The creators have also equipped the watch with a quick charge feature. The watch gets 70 percent charged in the first one hour, and takes an additional 30 minutes to be fully charged.

Raj tells us that they plan to produce 10,000 units at first, and launch the units this month (June 2016) for sale on e-commerce website Flipkart. Hug Innovations also has corporate tie ups with Microsoft, and is currently in talks with two other partners for rolling out their customer support requirements.

Currently manufactured and prototyped in Shenzhen, China, the firm is looking to manufacture the watch in India. They are currently in talks with a few state governments to figure out the location for manufacturing. The firm aims to acquire a user base of 25,000-50,000 users by the end of this year and reach almost a million customers in the next three years.

By the first quarter of next year, Hug Innovations also plans to start its operations in North America. It also plans to launch two devices next year, following it up with one flagship device the year after.

While this generation of devices aims at safety, according to the company, the next ones will aim at healthcare. The firm has also started talks with large hospital brands in India for partnership around the same.

Raj tells us that the next product will be a kid’s smartwatch with a sim slot targeting younger teens. The firm also aims to expand to a 75-member team in the next six months. Currently bootstrapped, Hug Innovations is looking to raise capital of Rs 12‑16 crores to fuel its next growth curve.

According to the Yearbook, published by the United Nations Industrial Development Organization (UNIDO), India was ranked sixth among the world’s 10 largest manufacturing countries, rising from the ninth position.

In the past one year, the government has been firmly pushing its agenda for ‘Make in India’, which has been attracting the attention of global players. In January this year, it was reported that the government had received proposals of Rs 1.20 lakh crore from companies that have expressed an interest in manufacturing electronics in India.

Homegrown manufacturing companies like Micromax shifted their production from China to India. Last year, Foxconn stated that in the next five years, the company wants to have its presence in five Indian states – Gujarat, Andhra Pradesh, Maharashtra, and Noida in Uttar Pradesh, while aiming to create up to a million job opportunities.

This manufacturing boom has given hope to many aspirational Indian brands in the past to build world-class electronics out of India. This includes India’s first smart electric scooter Ather or the first electric motorbike Tork Motorcycles.

In the smartwatch and wearables segment, the Hug smartwatch competes with global players like smartwatches from Apple and Motorola or fitness wearables like Fitbit and the Xiaomi Mi Band. But according to an IDC market, there is still room for more. There were 4,00,000 wearables sold in India alone in the first quarter of 2016.

With competitive pricing and unique packed features, itremains to be seen whether India’s Hug smartwatch will really be able to give the global players a run for their money.