With the world’s largest Gen Z population of 356 million, will the ‘next big disruptor’ be from India? 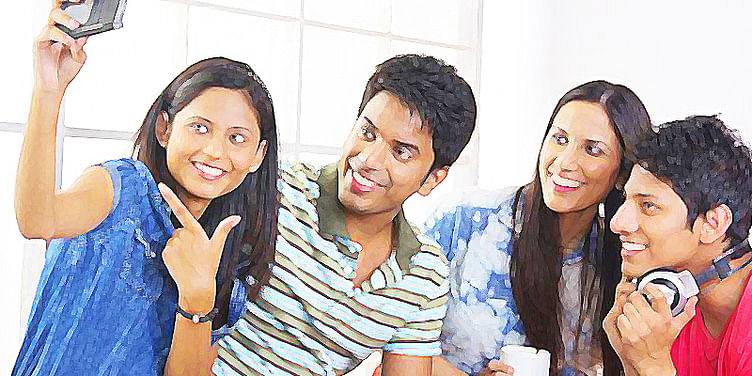 The energy in the room was so charged and palpable that it could literally light up an Indian village. There was a stream of applause, of cheering, of whistles, and laughter. A majority of the audience was made up of under-25 girls and boys. And the gentleman at the centre of all this attention was a young man himself, who has made his name writing romantic novels.

The author of bestsellers like If It’s Not For Ever, It’s Not Love, 29-year-old Durjoy Dutta sat on the stage alone fielding questions on love, sex, and dhokha (betrayal leading to heartbreak). And you could tell he was spent.

The Under 25 Lit fest in Bengaluru last weekend was the place to be if you were young and restless. Or like me (dare I say young) pursuing them to figure out what sets apart this generation born with the tech equivalent of a silver spoon.

“The young just fizzed up the festival. They were very animated, multi-tasking, multi-talking,” says author and Co-founder of Bangalore Literature Festival Shinie Antony, adding, “I was there with a classmate from college and we were both remembering how the ambiance took us back to our own student days. Except for one kid who sat with legs crossed and eyes glazed over, the under-25 masses were causing the very air to quiver.”

The X, Y, Z of generations

The West has a neat tradition of sorting the generations into nomenclatures like Gen X, Millennials, and now Gen Z for those born after 1996 (there are different opinions on which year each generation begins and ends).

We Indians though happily get by with ‘my generation vs my parents’. While socio-culturally this naming business may not make much of a difference, the defining attributes of a particular generation do have a big impact on how market forces and even elections work.

Calling the Gen Z (or as some say Gen Zers) the next big ‘disruptor’, an Ernst & Young LLP paper by Marcie Merriman says, “Politically, socially, technologically, and economically, we are moving at warp speed. These changes have created a generation very different than any known before. Retailers, and in fact all businesses, hoping to connect to these savvy consumers and their already $44 billion in purchasing power (‘Activities of Kids and Teens,’ Mintel Reports, November 2013) need to understand who they are, what they want, and how they want it.”

"Retailers, and in fact all businesses, hoping to connect to these savvy consumers need to understand who they are, what they want, and how they want it.”

According to a 2014 United Nations report, India has the world’s largest youth population of 356 million 10-24-year-olds (despite China’s largest population). And by 2020, India will become the world’s youngest country with 64 percent of its population in the working age group, says a report in The Hindu.

“What if the next big disruptor isn’t a ‘what’ but a ‘who’?” as the Ernst & Young paper asks, then in all likelihood shouldn’t she come from India?

In a series of articles, we will explore this question, and figure out what drives the young (urban and rural) in India, what their challenges are, and where they want to take the country and world towards.

“I think every generation feels that they are God's greatest gift to mankind and they will make the world a better place. The only difference in our generation is that many of us do not even believe in 'God'. So yes, that's a major step in 'saving the world'. The ideas of science, rationality, and logic taking precedence over religion, faith, and blind belief,” says 19-year-old Surya HK, a journalism and communication student in Bengaluru.

Resting a lot of hope in the Gen Z, a study by J Walter Thompson says, “More inspired by Malala than Beyonce, Gen Zers are characterised by ethical consumption habits, native digital technology use, entrepreneurial ambition, and progressive views on topics ranging from education to gender.”

A FastCoExist report adds, “Gen Z have been strongly shaped by their individualistic, self-reliant Gen X parents and they’re committed to avoiding the mistakes their meandering millennial predecessors made.”

“The young today are very aware,” says Roshan Abbas, well-known radio jockey and television anchor, adding, “They carry a sense of responsibility on their young shoulders, which is heartening to see.” Musician and singer Ankur Tewari feels that the Gen Zers “are growing up too fast. At the same time, there is a sense of camaraderie. So many of them have a picture of their pack of friends as their display picture on social platforms instead of their own. It says a lot.”

As I stood behind watching the young applaud to this sublime performance, it gave me hope that the Gen Zers are out there in the front infusing the air with a promise of a better tomorrow. Who know they may actually power up a few villages in the process.

(Watch this space for a series of articles to make sense of the Gen Zers, the true digital natives, and how they will influence change, especially in the Indian context. Comment if you have anything to say about them or email [email protected])