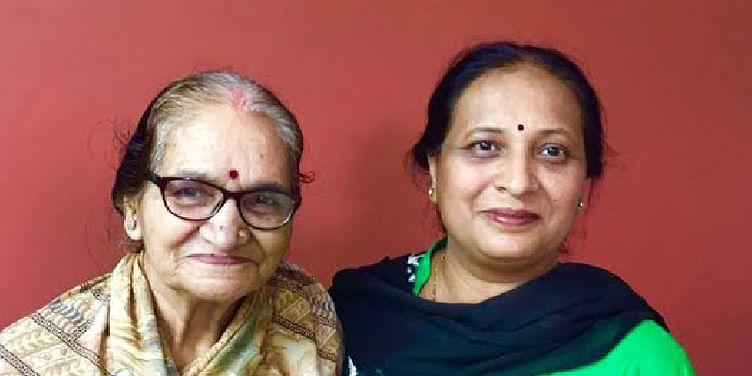 Most of our lives begin with a carefree childhood, followed by years of schooling and college, from where we graduate and set out to conquer the world with baby steps. Once our degrees are in hand, everything seems in place to kick-start a promising career and settle down for a decent bank balance. Next, comes the responsibilities of a marriage and starting a family. We juggle a hundred things at times, fail at a few, and succeed at many more, but our commitments and the demand to fit into mainstream life don’t seem to end, or does it ?

Two women decided to challenge stereotypes and redefine their life goals at a time when retirement was the more obvious choice. After retiring as teachers Rama Pandey at 72, and Dr. Shashi Pandey at 46, decided to venture into a area which was completely alien, and started India’s first and only digital marketing social network, Infinite Mobility.

It all started when Rama was on a vacation in the US. While surfing the internet, she frequently noticed some random messages, videos, and pop-ups on her computer screen and smart phone. That drew her attention, which in turn, motivated her to understand the nuances of digital marketing. As much as the concept excited her, she was in awe of how easy it is market a product online and remain profitable. She then shared the idea with her daughter and soon the plan to build a digital advertising and software development platform was laid out.

They began the company with two employees. Both Rama and Shashi’s skill sets complemented each other as the former, who is an expert in mathematics and economics, managed the strategies of the company, and the latter, who has strong interpersonal skills, and is adept at social engineering and activities, managed the overall growth.

As a digital marketing platform, Infinite mobility helps vendors plan their advertising budgets meticulously on different media delivery channels. Today, it has a network of almost 25 million connected devices spread over 125+ affiliates and partners. It also allows clients to use the portal for ad-space along with the digital marketing aspects the company pioneers in.

As per a recent report by a media agency, ad spending in India will grow 15.5 percent in 2016 to Rs 57,486 crore with digital advertising expanding at an unprecedented 47.5 percent. Talking about the competitive market they deal with Shashi says,

India is the fastest growing ad market among all the major markets of the world. 2015 was the best year for ad spend growth we’ve had in the last five years. While global headwinds are building up in the new year, there are a number of positive factors that will help the Indian ad sector grow at higher levels in 2016. Consumer product, automobile, and e-commerce companies will continue to drive growth and telecom, banking and finance, and the government sector will join the party.

The firm is right currently boot strapped with a annual revenue of about Rs 2 crore. While there are many companies in the same space such as inMobi and Tyroo Media, the founders are very positive about their growth.

Talking about the initial hurdles of being a women entrepreneur, Rama says,

Entrepreneurship means a lot to both of us. It’s a real test of our execution skill. We’re sure, everyone wants to do something rewarding. But when it’s comes to execution; 80 percent quit and out of the 20 percent who try, around 18 percent fail and only a minority succeed and we want to be in that small percentage.

When asked about the competition in the digital and software market, Shashi says that,

The right resources really make a huge difference. The challenges of finding reliable resources and the people who will work for you, is very crucial. If you won’t find the right people you’ll often fall apart.

Women employees and retired personnel have always been their favorite picks as they believe that experience and wisdom is a great asset to any role. Once on-board, the company trains them in basic computer techniques as the firm deals with digital marketing as a priority.Their journey has never been a cakewalk. Their age has always been a factor with people doubting their capabilities and product knowledge, but both these women have diligently educated themselves with the nuances of social media marketing right from the company’s inception. What was considered a bane in a generation that is not usually regarded as tech-savvy has turned into a boon.

The mother-daughter duo are not just only efficient entrepreneurs, they gracefully toggle between their personal and professional lives. Their families have been very instrumental in their journey, and are keen to contribute when needed.

Today, Infinite mobility is just a year old but has a database of more than 50 million devices connected to the portal. It has successfully employed 20 individuals under its banner.