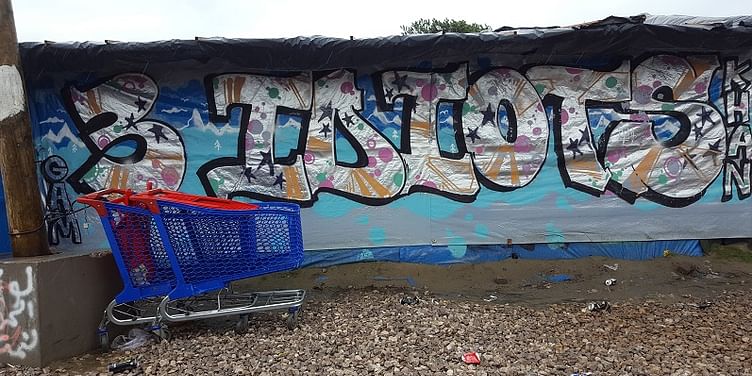 A refugee camp reminds one of something temporary and unstable because its dwellers generally live between something they have left and something they wait for. It can take a while to imagine how sustainable businesses can emerge there, and yet, entrepreneurship is quite common in refugee camps - although not enough - according to a paper published by the University of Cambridge a few months ago.

In some cases, particularly where settling permanently in the camp is not an option, instability becomes the basis for these entrepreneurs' business models. With all the controversies it brings along.

The 3 Idiots is a restaurant-cum-grocery shop in one of Europe's largest refugee camps called the 'Jungle', located in Calais, France. Only a few locals understand the Bolliwood reference (and they are probably all from South Asia), so the name sounds rather self-deprecatory. It opened in September 2015 when three friends from Peshawar, Pakistan, met there by coincidence after a long time apart.

The Jungle hosts about 5,000 people and is borderedd by a highway, a sea channel, and a desolate industrial area. Its great extension is explained by its proximity to the UK, where many asylum seekers aim to go. Their only choice to cross the channel between France and Great Britain is often hiding in trucks that carries goods to the island (which now could be harder if Brexit implies restrictions on good circulation to the UK). This is not an easy task, and therefore, a semi-permanent camp - the Jungle - has emerged. Currently, between 50 and 100 people arrive daily according to local volunteers. They are from different continents, have varying social backgrounds, religious affiliations, cultural upbringings, economic education, and speak different languages. Some of them have decided to start up a business.

At the 3 Idiots, one of the founders introduces himself as 'Mr Awesome' keeps running around with cups of tea and plates of naans, showing off an ever smiling face. He seems more than happy to talk about how to start a business in a refugee camp.

Despite its oscillating numbers, the population of the Jungle certainly provides a good customer base. It seems the dwellers sustain themselves mainly with personal savings, a minority with state benefits from European states, and some by running small businesses like food shops or improvised bike rentals.

Moreover, there is also a less numerous but still conspicuous and way more financially stable amount of volunteers. They spend regular time in the Jungle, are mostly British, and help the dwellers of the camp with construction, education, healthcare, and religious support. Mr Awesome says volunteers are his main customers.

Each commercial activity in the Jungle has a different initial boost. Entrepreneurs in the camp explain that there are two ways of to fund a business. Some use their own savings to buy either building material adn equipment, or existing infrastructures from previous owners. Alternatively, they have volunteers setting up the infrastructure with materials they provide free of cost.

Mr Awesome from the 3 Idiots explains their business falls in the latter category. "90 percent of what you see here has been donated by someone: the shed, the rubber layer that covers the floor, the carpets." He points at the bunch of balloons hanging from the ceiling, and then at two massive stuffed tigers and says, "This was all brought by British volunteers."

Entrepreneurs in the Jungle generally have a background of self-employment.

Communication is one of Mr Awesome’s most impressive characteristics. He welcomes everyone at the entrance and has a joke for each of his guest. Like many in the Jungle he speaks five languages, but uses eight to communicate with customers. He never refuses to answer questions, and talks willingly about his story, international relations, nuclear power, and Shah Rukh Khan (whose relatives – he says – are his neighbours in Peshawar).

Both the shop and the restaurant are kept clean and tidy. When the customer orders food, Awesome or one of his colleagues unrolls square rubber linen and sets the cutlery. Everything is then washed up and kept away. They also serveshishas, tea, and never stop conversing with their guests.

“I used to be a translator and tourist guide back home, but often, I would take care of arranging food for tourists, so I’d run the kitchen. I used to do a bit of everything really” Awesome explains.

Besides the three founders, five young men work at the 3 Idiots as cooks and kitchen porters. They are all Pashtuns, and most of them have a degree and speak English.

Although Awesome did not share the details about his business, it is certainly a profitable one. Owners of other restaurants in the Jungle, who shared more information about their income, revealed that they have a profit of almost 90 percent.

“Since part of the Jungle has been evicted, there has been more competition,” Awesome says. He refers to the demolition of the southern part of the camp last April by the French police, which led to an increase in the density of population in the northern half. More food places have emerged here as a result of the relocation.

Awesome, however, is not very worried, “We are good at what we do, we like to talk and people know that, especially volunteers. They give us good publicity and we are known even in the UK!” He shows proudly a newspaper article written about them. “No one in the Jungle is as famous as us.”

When asked whether the 3 Idiots face any other problems, Awesome denies it. He does not mention the ephemeralityof the Jungle, the economic and numerical inconsistency of its population, or other issues specific to a refugee camp.

Awesome shares that he left Peshawar in 2011, crossed 13 countries and gained the refugee status because he, “loved to travel and wanted to see the world.” It is hard to analyse the psychology behind his statements, but it certainly serves as motivation for running his business.

“I am going to the US next. I don’t know when, but I’ll see the US” He later adds, “I am not able to make long-term plans. I just do the best thing I can in every situation. I am going to run the 3 Idiots until the Jungle is in place.”

The entrepreneurial spirit in the Jungle is not the only element that sustains businesses. Unlike the majority of the population of the camp, most of the Pakistani entrepreneurs in the Jungle are not asylum seekers. They have already been granted the status of refugee and have the right to work legally in Europe.

Many of them have in fact worked elsewhere as construction workers, market sellers, and so on. But these jobs are temporary, underpaid, and often without a contract.

Three Pakistanis who own a grocery shop in the camp admit they have no intention of moving to the UK. However, the population of the Jungle - including both dwellers and volunteers - is a more profitable market than anywhere else for them. There are no renting costs, no bills, no taxes; and there is frequent help from volunteers for repairs, and customers more used to their working habits and services. Although it is a temporary situation, it is more stable than elsewhere in Europe.

Between heart and mind

Mr Awesome claims that one day Pakistan will be one of the world’s leading countries. His arguments are the friendly relations between Pakistan and China, the presence of nuclear power for defence, the growing number of female military fighters, and patriotism. “One day” he concludes, “ it will be you, from Europe who’ll be living in refugee camps in Pakistan trying to smuggle into China.”