[Bootstrap Heroes] GetNatty, a young Gujarat-based platform for designers with original creations, to hop on the digital wagon 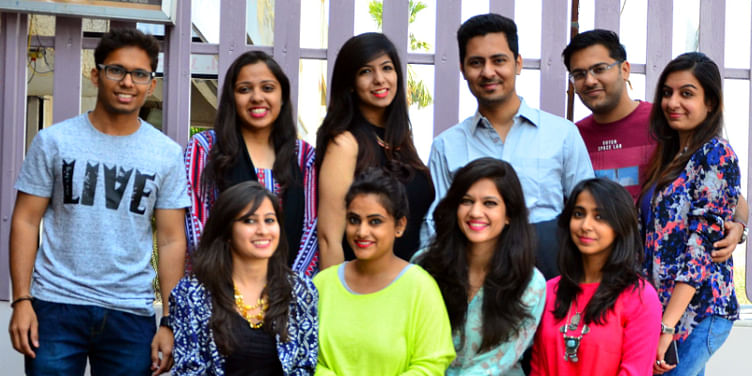 An exhibition is nothing less than a congregation of artists, and the pride you associate with wearing something bought from one is nothing short of feeling like you are sporting a work of art. The ordeal of shoving, nudging and elbowing through exasperating crowds to lug your mass around hundreds of stalls in stuffy arenas is almost worth finding another piece which isn't mass manufactured and has no close replica. Almost. Kaizad Hansotia decided to eliminate that single deal breaker in your treasured bespoke shopping experience.

Almost every day of the first 17 years of Kaizad’s life had been spent living and loving chronicles of entrepreneurs, as he accompanied his mum to work and read books like Rich Dad Poor Dad. Thus, he was business-ready before even finishing up with school at 17, and sold Electric Fly rackets door-to-door –a business he scaled up by roping in few classmates, making him his first Rs 1 lakh. During his MBA at IBS, he started working part-time as a business developer for a Diamond Jewellery company, while also managing a side business of selling tour packages on behalf of a travel company. He then worked with the edtech startup www.mytestbuddy.com as a CMO for almost three years, before deciding to take the plunge. It is safe to say, he was born to be an entrepreneur, and his mind is always on the lookout for that next big opportunity. But, be warned, entrepreneurship is not for the faint-hearted, he says. “Even if you are, after repeated blows, you'll probably grow a thick skin.” Kaizad, perhaps, had grown one, by the time he reached his 'aha' moment the fourth time – this one being the grandest leap of them all, attempting to carve out a niche in a rather crowded space.

It was early 2015; he noticed some big beautiful cardboard books neatly decorated in their drawing room. His sister later explained to him that they were called "Portfolios", which young fashion design graduates had to make in their final year of college. “When I opened the first book, there was an astonishingly creative sketch of a gown that looked radically different from what we normally see people wearing today. Flipping the pages of that book made me feel like, maybe, I was witnessing the future of Indian fashion. I scoured through all five books and realised the immense hidden talent that young fashion designers have in our country.”

After meeting 15-20 of his sister’s batchmates and a few other local designers, he was convinced that the only thing missing was a platform to unite these talented folks and display their work so the world could take notice. And what better way than to use technology to solve this problem? “Haven't you seen the countless number of fashion-savvy people flocking to exhibitions and flea markets to search for these hidden gems – for the kind of products that you know you will almost never find online? Imagine what happens if all these artists had a dedicated platform to showcase their products and let customers find them through a single point of contact. Their discoverability is a real problem in India, and that is the gap we are aiming to fill through the GetNatty initiative.”

He met his co-founder through a common friend. 32-year-old Bheshaj Joshi has profound domain knowledge, having been a serial entrepreneur who has built and sold multiple tech businesses both in India and the Silicon Valley.

In order to address the big opportunity, they first started nailing down all the problems that young and emerging designers face, and carved a business model out of the glitches aspirants face while going digital. Charging a monthly listing fee of Rs 499 for the designers, they offer them the entire range of e-commerce services such as cataloguing, photoshoots, logistics and payments support, and much more to build their business online. One strategy they employed was temporarily opening up their platform to budding young photographers and models too, to help them collaborate with their designers and conduct photoshoots that cross-promoted all three of them.

They are targeting both men and women in the age group of 16-35 from the Tier 1, 2 and 3 cities of India. Their main business development efforts are currently online, due to limited foot-soldiers. They are reaching out to designers on social media.

It has been four months since they launched, and so far, they have been registering a 25 percent month on month growth, averaging about Rs 15,000 in revenue each month. So far, they have a few hundred users with every visitor spending on an average 6 minutes on their portal.

The market size of the Indian designer wear industry, according to a recent study by ASSOCHAM, is growing at a compounded annual growth rate (CAGR) of about 40 percent. According to the report titled ‘Trends in Indian Designer Wear Industry’, the booming industry in India is likely to cross the Rs 11,000 crore mark by 2020. “In this space, there have a few players such as Perniaspopupshop.com, exclusively.in and thetadpolestore.com, but these mostly cater to high-end consumers whose average price points are much heftier. Another venture is NDTV’s Indianroots - which is a hybrid of original creations and curated stock,” says Kaizad.

Getnatty is unique in the way it treats its partners – “There are many compliance issues for startup designers and the focus of other brands is not entirely on them, unlike GetNatty, which nurtures these budding designers and handholds them through all phases of going online,” he adds.

They are completely bootstrapped and haven't raised any funding yet as their plan is to get good traction before raising an angel round. The next logical step in their strategy is to expand to 3-4 cities after their strategy worked in their city of launching, Vadodara.

“We want to learn from our mistakes to get better with time, before scaling to bigger cities,” he says. They are in talks with a few regional parties to expand their business operations in multiple tier-2 cities along with one metro, such as Ahmedabad, Mumbai, Pune and Siliguri.

In the immediate future, they will be raising a seed round of $50,000- 100,000 to build their team further, so they can hire “those business development ninjas we need,” and also leave some room to channelise their marketing efforts.