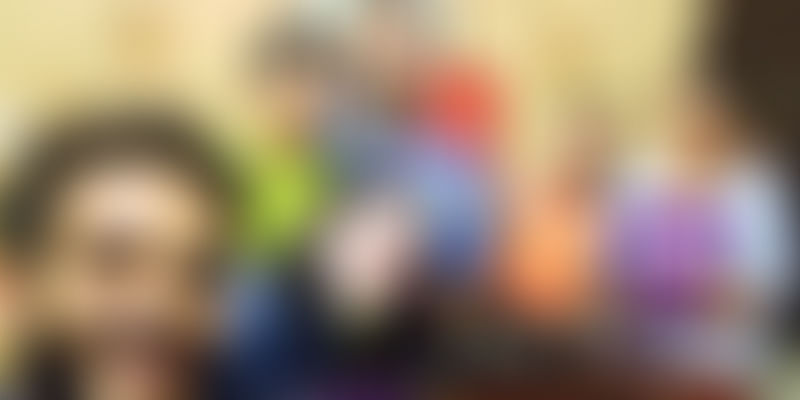 Very few people have the courage to choose entrepreneurship at the age of 18. Though no easy feat for a college student, Kavish Gadia experimented his entrepreneurial streak in stock trading business, commodities trading business and an import/export business. A graduate from Devi Ahilya Vishwavidyalaya, Indore, Kavish got into IIM Lucknow in 2003.

During his stint at IIM, he learnt that it’s not wealth that makes people richer or poorer, but a difference in their access to opportunities. Kavish was an avid reader since childhood and attributed his academic success to his love for reading. At the age of 26, he decided to inculcate the significance of reading among children in their early stage. Hence, Kavish along with his friends Jagruti Gala and Nikhil Saraf founded Stones2Milestones in October 2015. The same year, they decided to set the organisation on its mission of "Creating a Nation of Readers".

Gurgaon-based Stones2Milestones integrates the programme with language curriculum for grades one to three, which involves three to four sessions per week. The sessions are usually taken by S2M certified trainers. The programmes use effective methodologies such as reading aloud, group work, discussions, reflections and application of understanding through worksheets. An assessment process also takes place in the school every year to track a child’s transition and skill improvement. The school is provided with the teacher guide, teacher session plans, and student work books for each child.

Journey of a small town boy

Hailing from Siliguri, West Bengal, Kavish moved to Jhunjhunu (a district of the state of Rajasthan) in 1992 at the age of 10, where he was raised by his maternal grandparents. He co-founded a financial services firm Resurgent India along with Stones2milestones and therefore had to go through a financial crunch. But he eventually survived with the support from his family.

While Stones2milestones was in the experimental stage, Resurgent was growing phenomenally. Over the last seven years, Resurgent has grown to more than 40 qualified experienced professionals with its presence in five cities and has closed deals worth Rs 10,000 crore in the last financial year.

That’s when Kavish met Nikhil, a graduate from MICA who have experienced failures twice - online collaboration tool for students and an intelligent activity recommendation engine. Influenced by the vision of Stones2Milestones, he joined the venture and now takes care of product and marketing functions. Jagruti was the Founder and Managing Trustee of AURA, a non-profit that provides free education in India.

Stones2Milestones till 2009-10 has been operating the programmes as a chain of after-school learning centres across Gurgaon, Bengaluru, Mumbai, and Vadodara. In 2010, they presented their work in multiple forums and managed to sign up with schools. And in 2014, nine schools started using their programme. Currently, Stones2milestones has 23 schools with 4,500 children across Gurgaon, Delhi, Amritsar, Bengaluru, Kolkata, Bhilwara, Laxmangarh, Indore, Jhunjhunu and Hisar.

The cost for implementing the full year programme would be Rs 55 per student per month. The training and support fee is Rs 55,000 per annum. Student workbook and other required materials are charged at Rs 450 per student per year at the time of dispatch of material. Stones2Milestones has a team of nine people, including the co-founders.

The startup is likely to close the year at Rs 45 to 50 lakh in revenue. And by 2017-18, it has a target of more than 100 schools and revenue of Rs 1.5 crore. They are also planning to launch one product for parents called 'Freadom', which will be available on the smartphones of parents of children in the age group of five to nine years. By 2020, their target is to reach more than one million children.

As a part of expansion strategy, Stones2Milestones is likely to expand the offering to children in the age group of three to 14 years, launch a product for improving reading skills and develop interest in reading for adult age group (from 18 onwards), create an independent large scale platform for assessing reading and extend the product to non-English speaking countries.

According to India Brand Equity Foundation, India holds a very crucial place in the global education with more than 1.4 million schools and 227 million students enrolled. When it comes to e-learning, India is considered as the second largest country after US.

Startups in the edtech space are betting big not only in finding the best institutions, but also making quality education accessible in Tier II and III cities. Vedantu, Simplilearn, Toppr, Iprof, Talentedge, and embibe.com are some of the names one would likely take to leverage the education methods and technologies like real-time book updates, online tutoring, edutainment, and online test preparation.

The edtech startup space has witnessed a couple of investments in the past few months. Toppr raised Rs 65 crore for expansion in May, Bengaluru-based Vedantu raised $5 million from Accel Partners and Tiger Global Management, and Simplilearn raised $15 million in its third round of funding in April this year.