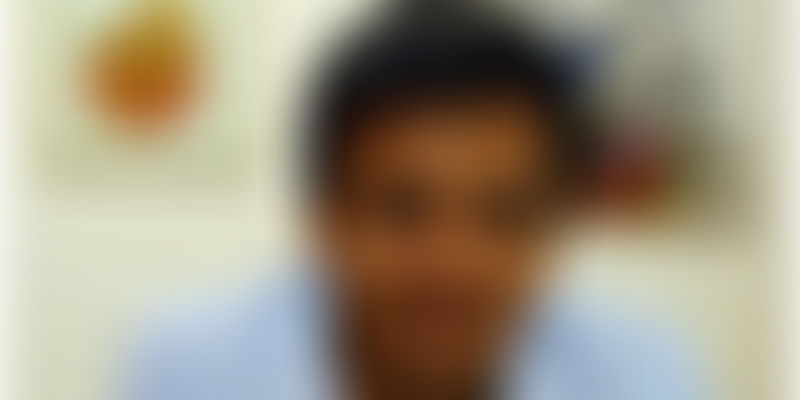 If the entire colonies dedicated to Indians in western countries are anything to go by, it is safe to assume that the 21st century globetrotting Indian keeps his “foreign” education close, but his money closer. For behind the façade of the grand international life are burdensome student loans, or perhaps that constant sword hanging over one’s head, the sponsoring family, which wonders about the usefulness of the expense of their life savings.

It was perhaps poetic justice then that a textbook ‘vaniya’ Gujarati– which is possibly the most infamously global community of the lot– engineered a way to help students cut short the ordeal of complex calculations, and technologically figure out the exact point in their careers, after their lofty college educations, at which they will break-even and recover the costs.

A scientifically trained finance professional with an obsession for understanding world economics, 23-year-old Vibhav Parikh is the founder of Fox Counsel. He holds a bachelor’s degree in management studies from Mumbai Jai Hind College.

In his final year at college, students and counselors alike were crying themselves hoarse about studies overseas. “Being a Gujarati, it was essential for me to see some profit in this investment. But none of the voices that were shouting “Study Abroad” had a definite answer. A ball-park figure is of no use with an investment of this size,” says Vibhav.

Like a true-blue Gujarati, he broke things down and laid the foundation for his jugaad solution.

Problem: How viable is an investment in an education abroad? Everyone knows it is imperative to study further, but not everyone has the financial capability to take that plunge to go abroad. Loans, expenses, and work permits are all factors that are seldom taken into consideration.

He learned about the ‘time value of money’ and various financial formulae at the same time. These financials were used extensively in the corporate world to evaluate the viability of projects. “I applied this to evaluate investments in education abroad. The output would simply be– when one would break-even.”

Finally, his Solution - the first ever Study Abroad Calculator in the world.

He used one of his research papers as a base, developed a few tricks on MS Excel, and made it work. “This is how things can be done for free!”

In three months, he found a partner, Pradnesh Patil, to take up the challenge of integrating finance and code. Within three more, they got the website up and running.

Fox Counsel, the online calculator, helps students estimate the cost of studying abroad and gives them their specific break-even period, so that students across India and the world are enabled to make the correct financial decisions.

The calculator uses a financial algorithm– the Fox algorithm- combined with the crucial loan payment schedules and expected salary ranges.

An individual in the USA and an individual in India would have different break-even years for the same university. This is because Fox Counsel uses the financial concept of “opportunity cost” and ensures that the output is as close to reality for the specific user.

The user has to input six primary details:

Additionally, they have to punch in details of the loan taken, and years that must be skipped for accommodation and food expenses – in case the college’s fees is inclusive of the two, or the student is not going to bear the costs if he is, for example, staying with a relative.

The output would be the year in which the user would break-even, and a table that shows all costs, including electricity, housing, food, miscellaneous expenses and taxes, for the years till they are expected to break-even. The user can also alter the housing and food costs.

The calculator can be used by anyone. Residents in Sydney could take a loan from a bank in Sydney or the United States, and still get an output year that would accurately match their needs.

The world is his oyster

According to UNESCO Statistics, there are nearly 30 million students studying internationally every year – so, that is Fox Counsel’s market size. There are also the parents of the 30 million students, and the students that do not end up going abroad. In all, conservatively, Fox can potentially serve 50 million people a year.

This doubles up as a potential opportunity as well as a challenge. With a small team, it has been difficult to reach the entire target audience effectively; there is no one sure shot way, given how the audience is spread across countries and demographies. To overcome these barriers, they have formed networking nodes, through internet forums like Quora, across countries, which would, in turn, multiply the number of calculations.

Counselors also come in the realm of their target market. “We have a business model that encompasses students, parents, and student counselors, with a slightly unique show-case for each,” he explains.

They plan to establish tie-ups with career counselors, advertise in the educational and financial supplements of newspapers, and as of now, are already in talks with a leading educational loan provider in India for a partnership.

Kids better have my money

Fox Counsel has developed a “Venn Business Model” for their revenues, which will be garnered through user registrations, tie-ups with counselors and educational institutions, Google ad-sense and website adverts, and lastly, licensing.

Fox Counsel has also developed a unique back end system. “I can see what the users are searching for, from where to where the students are going, which is the most searched city and so on.”

So far, since they launched six months ago, they have garnered around 10,000 hits, with over a 1,000 unique calculations.

Currently, they are a free calculator. The revenue from registration and tie-ups will be generated after a year of operations. A firm even inquired whether Fox could license the calculator to them, such that they would be exclusive users of the tool. "We have kept the idea on the table for the future, but chosen not to go ahead with this stream at this early juncture," says Vibhav.

Having said that, they have made sure their fixed and variable costs aren't in the red and that they can continue operating.

A growth hack has been tapping into the global community that Quora has to its credit. “There are people who blatantly use it to advertise their product, but we aren’t amongst those. We simply answer questions and that then translates to hits. I believe it is a much stronger medium than Facebook and Twitter for my product.”

He has answered 59 different questions on Quora from different Indian users, and got nearly 30,000 views since he became active last October. “If you see my answers, they are extremely specific and in-depth with regard to the questions posed. From there, I connect with students, who then use my website to help others directly.”

Currently, Fox Counsel is a completely unique product in the world market, and faces no direct competition. The Fox Counsel team do not consider themselves as a substitute to counselors, but rather, as a “synergetic complement.”

The next step for Fox Counsel is building liaisons with renowned counselors. To ensure word-of-mouth organic growth, they are planning to deliver presentations to final year students across colleges in Mumbai. “Recognition from the government, to give access to my calculator to students who would need a loan, is another avenue we are going after,” says Vibhav.

Fox Counsel will also be starting a free information portal on a “guide to study” for the various competitive exams, such as GMAT, CFA, GRE, CPA and the likes, using professionals in their respective fields.

The founder, Vibhav Parikh, will also be available as a Fox Counselor- for entrepreneurs that are at the idea stage of a service or product. “This would ensure that new entrepreneurs have a sound financial and business model in place before they begin, so they understand the risk before taking the plunge,” concludes Vibhav.