India’s internet in 2020 — a wishlist for growth and inclusion 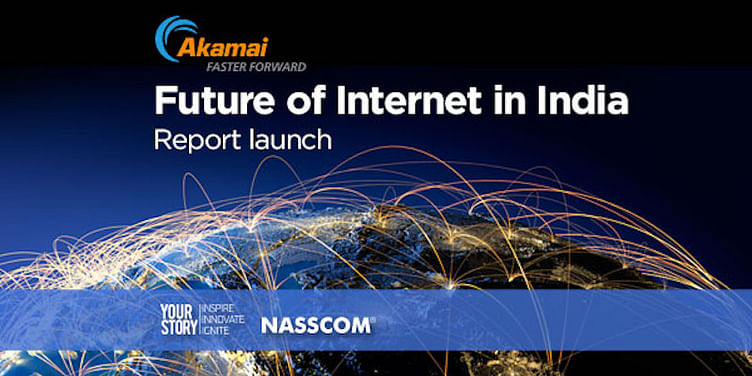 What’s your wishlist for how the internet can become a transformative power in India by 2020, and not just an enabler? A range of industry experts offered insights into India’s internet story, and potential for future impacts.

Keynote speakers and an interactive panel discussed a number of such digital media issues at the launch of the report, ‘Future of the Internet in India.’ The report was launched by India’s National Association of Software & Services Companies (NASSCOM) in partnership with Akamai Technologies, a global leader in content delivery network (CDN) services. The study was researched and created by YourStory.com, India’s leading media platform for entrepreneurship.

There needs to be stronger government-industry partnerships to promote internet connectivity. “Connectivity is the most critical part of digital infrastructure,” said R. S. Sharma, Chairman of the Telecom Regulatory Authority of India (TRAI). This has to be reliable even in the most remote parts of India so as to deliver the India Stack layer of digital services such as authentication and secure payment.

India ranks below Bhutan and Sri Lanka in terms of broadband access. India can’t be seen as a relative ‘superpower’ when it comes to the IT industry but ‘super poor’ in connecting all its citizens. All manner of connectivity options should be encouraged, said Sharma, including ‘open sky’ approaches via satellite and balloons.

Ensuring affordability is extremely important in the Indian context, without violating the principles of Net Neutrality, according to Sharma.

While India’s telecom success story seems to be dominated by mobiles, there also needs to be adequate focus on landline access for broadband internet, cautioned Sharma. Having only 20 million fixed landlines in addition to mobiles will not be enough to meet the ‘data crisis’ created by data-hungry applications.

Countries like the US and South Korea still have high-speed broadband via landlines, whereas 95 per cent of broadband access in India is via wireless, said Sharma. Fibre access is also a part of India’s National Optic Fibre Network (NOFN) but it is hard for government to build, maintain and market it. Cable TV providers can also ramp up their internet offerings, but there have been concerns over the ability of smaller such providers to offer the high level of service that internet users expect.

MuniFi (municipal WiFi) has been quite successful in cities such as Singapore and Barcelona, with free access to hotspots with an acceptable level of service. Such models could work in Indian cities also once the business model has been harmonised between government and private sector players.

India has 150,000 common service centres, and the PCO (public call office) model could be reinvented as the PDO (public data office). These could be run by entrepreneurs in a for-profit model, based on local needs assessment, said Sharma.

“What a difference a few years makes,” remarked Tom Leighton, CEO and Co-founder of Akamai Technologies. The rapid rise in video traffic as well as security attacks on the internet call for broader stakeholder engagement.

“Our expectations are enormous. We crave speed, we love quality,” said Tom. Today’s generation wants immediate access to content and services on any device. He cited studies which indicate that faster download times of web content increased e-commerce revenue for WalMart and improved conversion rates for Practo.

Unfortunately, the internet and mobiles also open up a wide range of risks from cyber-attackers. To the incredulity of the audience, Akamai CEO Tom Leighton narrated how phishers posted online tax applications on his behalf and claimed refunds from the US government. Other phishing attacks deviously used the domain ‘akarnai.com’ which can look like ‘akamai.com.’

Tom reeled off a range of cyber-attack types such as political hacktivism, glory hounds, state sponsored terrorism and cybercrime. There is a huge need for technologies that can prevent data theft. In that regard, the NASSCOM Sector Skills Council is working on enhancing cybersecurity skillsets for Indian IT professionals.

Proper marketing of such digital services can overcome consumer perceptions and fears about the medium. Some Indian banks are effectively marketing fin-tech services via step-by-step education for different customer segments.

It would be great if the government and industry could work out regulator frameworks for minimum quality of service (QoS) for technologies like 4G, according to other participants at the report launch. It may be hard to guarantee such a minimum, but a guarantee for average quality could be more feasible, cautioned TRAI’s Sharma.

More content needs to be made available in Indian languages, especially video content, for the next wave of users. “However, we need to go beyond content to Indian language tools such as search engines as well,” added Gyan Gupta, CEO of Dainik Bhaskar Digital (DBD).

Popularity and widespread adoption of the internet will also depend on how well it solves customer problems. This includes financial problems such as finding the right insurance policies and other banking solutions, said Naveen Kukreja, CEO and Co-founder of PaisaBazaar and CMO of PolicyBazaar.

Speakers cited how their maids and drivers have bought smartphones because WhatsApp solves their issues of affordable communication. “But many Indian app developers are not addressing a specific problem which can be effectively solved,” cautioned Gyan of DBD.

At the end of the day, innovation and creativity will be key to bringing the fruits of the internet to a broader range of society. Aadhar and other features like OTP are prevalent in India like no other country, said Prasanto Roy, former Editor of Cybermedia Group and currently head of NASSCOM’s Council for Internet, Mobile and e-Commerce. Some companies are even using OTP as a way of validating employees’ entry to the premises, observed Prasanto.

Using the Olympics pole vault as a metaphor, R.Chandrashekhar, President of NASSCOM, said the internet is like the pole for India to vault over its ocean of problems. The internet opens up new development paradigms, and can unleash new waves of transformation the way it powered India’s IT and BPM industries.

The overall e-commerce market in India was valued $17 billion in FY 2016, and by 2020, India will have an estimated 702 million smart phones in use and mobile phones will emerge as the preferred device for shopping, accounting for 70 percent of total online shopping. 50 percent of travel transactions are expected to be online by 2020.

“Internet penetration in India will stretch beyond the large cities, as more services and devices come online. This is also a great opportunity for enterprises to harness the power of the internet to innovate and scale operations,” according to Sidharth Malik, Managing Director, India, Akamai Technologies.