A school of rock, river, mountain and soul: India’s first school to learn the ABCs of travel journalism and marketing 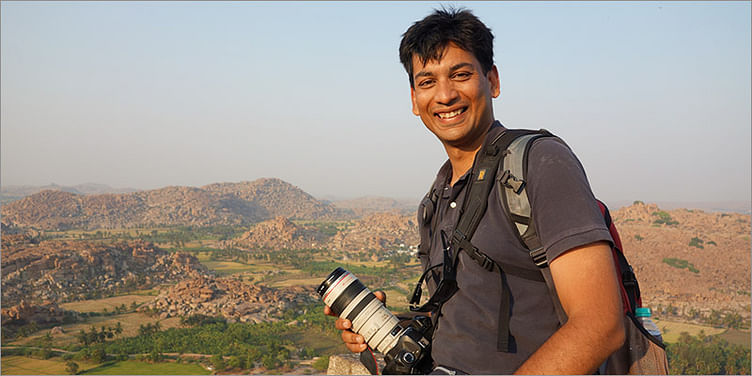 They say travel is the greatest teacher. So I say, it is only fair that it gets a school to teach in- and there are no prizes for guessing who has taken it upon himself to erect the classrooms.

At the myriad of travel conferences he graces, people often wonder why Ajay Jain unhesitatingly spills his hacks and B-plan ideas to milk the travel industry- a field that is the stuff of dreams to work in, but is a nightmare to monetise. It is because he is sure enough of his agility and proactiveness in applying all of these models to his own lab of travel himself, well before wanderlusting aspirants and potential competitors. And surely enough, after setting up a profitable travel blog- one of India's first, with a reader base of over 90,000, a travel channel, sporadic tours with interested and interesting bunches of people, and a travel cafe which brews coffee and stories with the same ardour, the vagabond who lost his heart and gained his purpose at Kunzum, is back with yet another exciting venture- the Kunzum School of Travel.

46 at last count, he went to St. Columbia’s School, Delhi College of Engineering (Mechanical Engineering), Fore School of Management and Cardiff University, UK, for a masters in journalism. After careers in IT and sports management, he dropped everything to go back to school to learn journalism and photography, and restarted as the lowliest of reporters in the Indian Express group when he was 32. “If I had not taken such steps, I might still have been selling computers somewhere and not doing creative things like travel, writing and photography.”

With a history of compulsively following his heart, he woke up one day to tell himself, “That’s it; I am done with the mundane.” He took on sports management and introduced sports like pool and bowling in India, while he continued writing for publications. “Soon, I figured I no longer wanted to write my editors’ stories. They were all bound by set templates and compulsions, and I was not going to be a conformist. So I went freelance, started blogging when blogs got invented, and went on to be a new media journalist and publisher,” he says of his humble beginnings.

Being amongst the earliest professional bloggers in India, initially on technology, and then travel, over the years, he saw hundreds of young people take to travel blogging and photography, with many more waiting in the wings. But he saw that many lacked the skill and tools to do a decent enough job at it. He also addressed a lot of travel industry forums, and realised there was also an immense lack of understanding of how digital marketing and PR worked. “For long, I have noticed that people would give their left arm to be able to travel, but you can’t just start travelling- you need a purpose, or money, or both. I would get calls all the time from industry acquaintances seeking advice. So I started conducting talks and workshops on these topics, and they were received very well,” he says.

And then came the ‘aha’ moment. “Based on the success of our earlier workshops, which were all consistently house-full, we figured that there was a market for such courses. And we jumped right in, and came up with the idea of the Kunzum School of Travel- to train people to be travel bloggers, photographers, videographers, storytellers, marketeers and more,” he explains.

At his pay-what-you-like Kunzum Travel Cafe – frequented by those struck by wanderlust as their favourite haunt in Delhi’s Hauz Khas Village, he translated to action his simple idea. Delhi also has the highest concentration of travel and media companies, so Ajay made the informed decision of staying put.

He rolled out workshops and courses– modules ranging from one day crashcourses to three month in-depth dissections of the lofty industry; the cafe from which one has always walked out a changed person emotionally, will now also transform people intellectually. All of their courses are offline. “While it is trendy to go digital with webinars, video tutorials and online classes, I prefer face-to-face to establish a bond between attendees and mentors.”

The process of setting up this business, he says, is quite simple: fix a schedule, tie in mentors, advertise, take bookings and conduct the course. Their initial workshops have seen full houses- they had decided to take in 30 at a time, but have admitted more due to last minute pressure. Ranging in cost from Rs 3,000 a session to 15,000 for the ones spread out over a span of weeks, the subjects cover not only travel journalism, but also photography, PR, marketing, branding, technicalities of new media and a host of others. So far, he has concocted 12 such courses.

So far, 10 editions of the one-day workshops have been conducted, to nearly packed rooms, with 250 students taught in all. The longer courses are set to commence in October.

A sure-fire hit amongst their mind-boggling palette are their travel blogging workshops. Each one has been sold out to date. The challenge, however, according to Ajay, is that while people attend classes, they don’t always act on what they learn, even though they spent time and money, which essentially means that they don’t sign up for advanced courses. For example, after learning the basics of blogging, they do not sign up for the technical session that they would need to actually set up their blog. Ajay wishes to do away with the frivolity in their attitudes towards a topic this beautiful and so rife with potential.

Straight from the laboratory

While certain universities abroad do offer full-fledged courses in travel journalism, India is yet to have an academic offering this specialised. Besides, niche subjects like branding, PR, marketing and writing, just pertaining to documenting and selling travel, are covered sporadically as panel discussions.

Coming up is #IndiaisCalling, a marketing campaign to promote Indian tourism globally, which will also involve Ajay’s students getting their hands dirty. “It will show why Incredible India got it all wrong despite spending hundreds of crores,” Ajay signs off.