Inside Niki.ai’s ambitious plan to become a ‘smart marketplace’ for everything 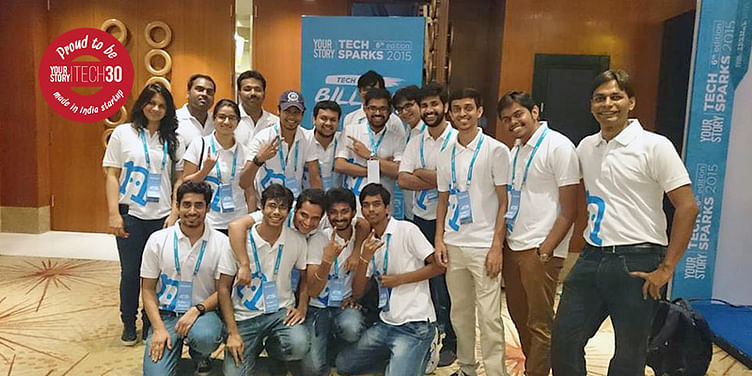 It was a recent rainy Saturday afternoon when I found myself seated in the lobby of Niki.ai’s new office located at Bengaluru’s startup hub-Koramangala. Although it was the start of the weekend, I found two employees in the lobby with me, discussing animatedly in hushed whispers. After a few minutes, Sachin Jaiswal, CEO of Niki, came out to greet me and also collect an order of burger and fries from a delivery boy, who had just arrived.

Recalling their most recent integration, I enquired, “Did you order that through Niki?” gesturing at the package he had just accepted. “Obviously,” he replied with a smile, as I was ushered into an adjacent boardroom to meet two of the others co-founders, Nitin Babel and Shishir Modi.

Though I had conversed with Sachin over the phone multiple times in the past months, this was only the second time I had met him, since they had launched their artificial intelligence (AI) chatbot, at YourStory’s Techsparks 2015, as one of the Tech 30 startups. Over the next hour, we discussed at length about Niki’s progress in the last few months, AI and machine learning (ML) applications and what the future holds for chatbots. Here is an overview of the discussion.

Niki.ai was founded in April 2015 by four IIT Kharagpur alumni – Sachin, Nitin, Shishir and Keshav Prawasi. The startup was positioned as a chatbot that leveraged AI and natural language programming (NLP) to help users book cabs and make online recharges over a chat interface. In November 2015, Niki disclosed that it had raised a seed round of funding from Ronnie Screwvala’s Unilazer Ventures, to enhance their product development and also expand service offerings.

Over the next few months, Niki went on to collect feedback from its users to further improve the user interface and overall product, while also on-boarding more service providers onto the app. The most notable development in this regard was tying up with Burger King and Limetray to let users place orders and pay for burgers over chat.

Niki had their biggest development though in May 2016, when Ratan Tata, Chairman Emeritus of Tata Sons, announced that he had made a personal investment in Niki. Sachin mentioned that this was a big morale boost for the team and it also had a lot of impact on their business. He added,

This investment brought a lot of credibility and a few merchant and partners got further re-assurance about partnering with us. Mr. Tata’s backing also led to lot of inbound requests.

While Sachin excused himself to have lunch, Shishir and Nitin gave me a demo and overview of the new Niki app that they had been working on in the past few months.

Over the past few months, we have monitored the user experience of Niki and based on the data, have made enhancements in the user interface and also improved the language processing technology. Niki is now able to better understand context of the interaction and keep the conversation more intuitive.

explained Shishir, as he and Nitin took me through each of the features. The demo though was interrupted on a few occasions by notifications from Niki’s ever-active Slack channel. Some of the major updates include:

Technology advancements- Along with an improvement in NLP, Niki 2.0’s intelligence is able to find relevant and meaningful informations to help users make better informed choices.

Bus booking- Nitin noted that the bus booking experience on Niki 2.0 had been designed to be completed in the most natural manner possible over chat. He said, “Niki understands complex user filters and promptly comes up with the best bus recommendations. With a dynamic state machine in place, she remembers the context of the conversation, and responds accordingly.”

Future of AI and chatbots

While some of the industry experts are still sceptical about the ubiquity and impact of AI and machine learning in improving messaging and communication, the Niki team noted that they have been able to solve user pain points, by decreasing the number of apps one needs to rely on, and also deliver ‘customer delight.’

In terms of demographics, Niki currently sees a majority of their users in the age group of 21 to 30. Going forward, they aim to rely on word-of-mouth and digital marketing efforts to acquire users of other age groups. Senior citizens who are generally not comfortable using multiple apps but are accustomed to a chat interface form a market with a lot of potential.

Talking about the complexities involved in AI and the Indian market, Sachin, who re-joined us, noted that Indians have their own style of writing and hence it takes Niki’s algorithms some time to learn and get accustomed to different use cases. Niki currently has a few pending patents on NLP that it employs and also plans to enter the local language space by supporting Hindi in the coming months.

Chatbots have been much talked about in the recent times, with Facebook opening its Messenger platform for developers during the F8 conference. Microsoft, Slack, Telegram, Kik and WhatsApp have also opened their platforms to let businesses leverage their platform. Some experts believe that bots will be the new apps, while others feel that apps will still stay relevant for a long time. Shopyinsync, founded by ex-Yahoo veterans, recently released a messenger bot for e-commerce, while ixigo launched ‘ixibaba’ - an AI-powered personal travel assistant. Founded by Stanford and IIM alums, Instalocate is another niche messenger bot that tracks flights in real time and uses its predictive technology to provides contextual information such as flight delays whenever users might need them.

Niki’s plan, though, is to be everywhere they can interact with customers and add value. The startup currently consists of a 22-member team in Bengaluru and aims to be a ‘marketplace for everything, everywhere’ in the long term. Niki’s current core focus areas are utilities and travel bookings but in the future it aims to get into other sectors like end-to-end travel planning, healthcare and even e-commerce.

Recommended read: Will messenger bot replace the app, or is it just another hype cycle?

Niki generates revenue for each transaction facilitated on their platform and Sachin noted that they have no plans to look at other revenue streams like native advertising as it could spoil the overall user experience. Sachin disclosed that Niki’s average ticket size per customer was about Rs 2,500 per month with about 75 percent retention rate.

Niki is currently working on software development kit (SDK), which it plans to integrate with around 15 brands in the coming few months. The goal is to make Niki app-independent, and appear at all possible touch points for users, starting with Facebook Messenger.

After gaining over 75,000 installs on Android, Niki recently went live on Facebook Messenger to reach out to a wider audience. While Niki doesn’t have a dedicated iOS or Windows app currently, the Messenger bot now gives it access to users across all three mobile platforms.

With the Messenger Bot Niki aims to eliminate the need to install apps, eliminate the sign-up process and provide a seamless user interface on lower-end smartphones and 2G networks, which are common in India. Keshav, CTO, Niki.ai claimed that Niki was the first messenger bot to integrate multiple service providers and provide secure payment experience in a chat interface on Messenger. He said,

The technology backend integration is done in such a way that just an instance of Niki (in form of SDK) could be made available now for any brand, to integrate on their platforms (app and web) and utilise to process orders. This enables the brands to replicate the entire transactional experience across services over a chat interface and add value for their consumers.

Niki plans to roll out the next set of services - food ordering, laundry service, bus booking (that exist already in Niki Android app) on Messenger soon. Sachin, CEO, Niki.ai said, "With the Niki Bot on Facebook, we hope to provide our users an easily accessible platform with no barriers or resistance. This is one major step in the direction of simplifying the shopping experience and enabling the complete ordering process on chat.”

Sachin confirmed that Niki is currently in talks to raise a Series-A round to boost growth. While developed markets like USA are looking to leverage the power of voice search, with Amazon Echo and Google Assistant being the frontrunners, the Niki team believes that because of network conditions and other variables the focus in markets like India will still continue to remain on text-based chat, for the foreseeable future.