The journey of Shwetambari Shetty — from banking to fitness 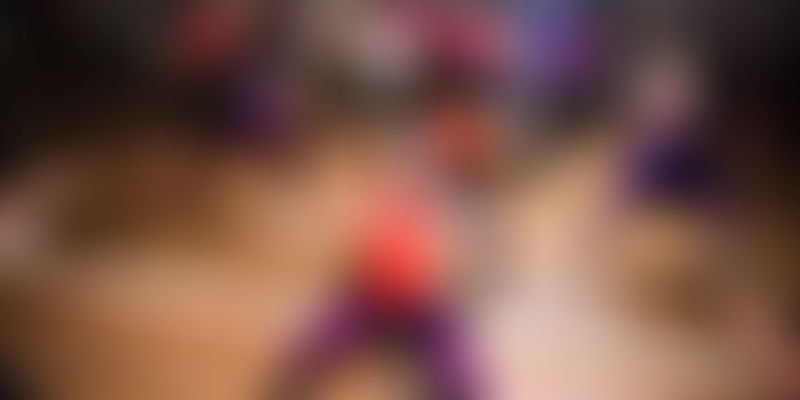 One look at Shwetambari Shetty’s social media profiles and you will realise just how many people draw inspiration from her fitness journey! From being a banker to becoming one of India’s most loved fitness stars, the Kundapur girl has indeed come a long way. We spoke to Shwetambari, 34, to know more about her rise to the top and how fitness is a journey, never a destination.

Banker to fitness instructor to entrepreneur

Like a lot of other youngsters, Shwetambari came to Bengaluru from a small town — coastal Kundapur in her case — seeking an education and a job. She started her banking career with HSBC as a client servicing manager and worked up the rungs to become a manager. Seven years into the corporate job, she was offered a job at a fitness club where she was expected to look into operations.

Hailing from a family of fitness and sports enthusiasts, Shwetambari had always led an active life. Even during her stint at HSBC, she learnt contemporary dance to stay fit. Hence, she took up the job with the fitness club and that marked the beginning of a stellar career in fitness which is only seeing new highs with each passing day.

As a part of her job at the club, she was required to take a Zumba certification class in October 2011. This was the time when Zumba had just come to India and not many knew about it.

“I was compelled to attend the instructor’s training programme as I was young and fit,” says Shwetambari.

Little did she know that it was going to change her life.

Shwetambari quit her job at the club to get married, and post the wedding spent three months doing nothing, as she found that more appealing than taking up a regular job.

“My husband pushed me to make use of my Zumba certification.”

Around the same time, Shwetambari got in touch with a friend who was starting a pilates studio in Koramangala and asked her if she could start conducting Zumba classes in her space. However, the beginning was not all that great.

“I still remember my first class. I had one student! It was a disaster, as Zumba is a group activity.”

However, Shwetambari kept at it and gradually she was teaching a room full of people. Her popularity grew by word of mouth, and soon she started getting calls from gyms and clubs around Bengaluru. For three years, she was taking three classes a day at different locations.

I was finally doing what I love. It all seemed perfect until I got a knee injury.

Although the injury was not major, it did teach Shwetambari a very important lesson:

“I realised that I was overtraining, something you should never do. I was lucky to get away with a minor injury but these can turn into major concerns if not addressed in time.”

Shwetambari was advised complete rest for three months. During this break, she happened to meet fellow Zumba enthusiast Sudhir Kulkarni and together they decided to start a fitness club.

I did all the dirty work. I remember running behind people in supermarkets and cafes asking them to fill up research forms. We wanted to gauge people’s reactions to zero in on the most suitable location to start our club.

After a fair amount of market research, Shwetambari and her co-founder started The Tribe Fitness Club in March 2014.

“I have been into it since then and there has been no looking back.”

The Tribe has two other centres — one in Whitefield and the other inside the LinkedIn office at Global Techpark in Bengaluru.

Along with being a trainer and an entrepreneur, Shwetambari is one among the country’s five fittest women and is also one of the only two Zumba master trainers in India today. While the titles may seem fancy, keeping them intact is no joke!

Fitness is something you need to keep working on. I am lucky that way because I come from an athletic family; my genes are really strong and that allows me to push a little further. As I grow older, I need to plan my workouts carefully as I cannot keep doing the same thing every day. Also, it’s necessary that I take much-needed breaks. Although given a chance I would like to work out every day of the week, my trainer makes sure I have one rest day.

It’s always a work in progress

In the age of size-zeros and fad diets, Shwetambari also stresses on the importance of a well-thought-out meal and workout plan.

It’s not always about how good you look from the outside. It’s not about losing oodles of weight by starving yourself. If you eat clean and work out regularly, the results will definitely be there for you to see. I hate the idea of deprivation and enjoy my cupcakes and beers on weekends. Nothing is harmful when done in limitation.

Being one of the fittest women in India, Shwetambari can afford to be selfish and get engrossed in her own fitness journey but she has set out to do the exact opposite. Her next aim is to make Bengaluru the fitness capital of India.

If Bengaluru can be known as a city of pubs why cannot it be known as the city of fitness? Having lived in the city for the longest time, I have seen how most of us tend to get sedentary, given our lifestyles. I am committed to inspiring more and more people to get fit.

As a step in that direction, Shwetambari now hosts the country’s first ever fitness hour on Radio Indigo Bengaluru between 7–8 AM, where along with high intensity workout music she also talks about diet and fitness.

Shwetambari is a great example of where perseverance can take you. As she goes about breaking more records and giving us major fitness goals, she has a message for all those looking to get fit,

No matter how fit you are, you take a break for 15 days and you have to start from scratch. It has to become a lifestyle.