With the raging Olympic fever, how SportsCafe is aiming to build a strong Indian sports-driven platform 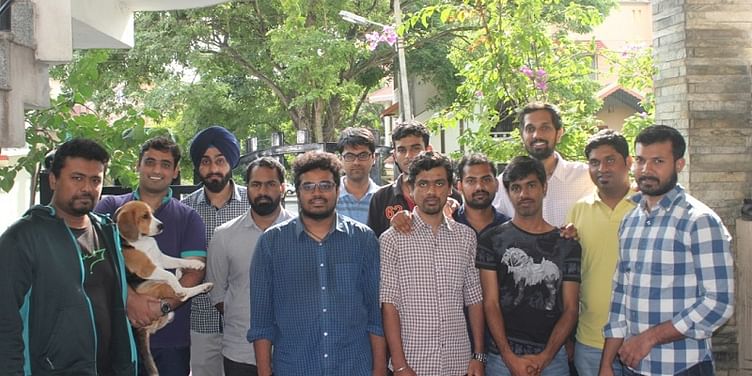 Rio fever is here and the world is actively looking to consume sports content. Our country is keen on seeing how our athletes are performing at the 2016 Rio Olympics.

In today’s digital world, content isn’t much of a challenge. However, sports enthusiasts Yashashvi Takallapalli and Prabu Thiruppathy felt there were very few Indian platforms that focussed on sports.

Looking at several international sports platforms like Sky Sports, SI and talkSPORT apart from daily news media, the duo felt the need to build a platform that focussed on sports in India. Thus, they launched SportsCafe, a news and gaming startup aimed at using technology to cover all sporting action specifically for Indian sport fans.

The ideation had begun when the duo were trying to follow Saina Nehwal at the Swiss-open last year. Twenty seven year old Yashashvi says:

We realised there weren’t any dedicated Indian sports websites that told us when the match was happening and any of the importance surrounding it. And we realised that this wasn’t just the problem with badminton, it included Indian hockey and lesser publicised sports.

They saw several international avenues that helped follow NBA, EPL, La Liga and even baseball online. Indian sports, however, had a massive dependence on general news portals with no dedicated coverage.

The duo came up with the idea to create a must-have app for a sporting fan – not just for news but for utility as well. Once the idea was in place, the duo roped in two other friends from IIM - Gaurav Konar, an IIM-B graduate; Sahil Ahuja, an IIM-C graduate ‑ and Yashashvi’s cousin Ranaveer Sankineni, a University of Nottingham graduate, as the core team to build SportsCafe.

Bengaluru-based SportsCafe provides all updates and information on all the sports, fun sporting tit-bits as they move around a city, and live updates.

Moving ahead of the challenges

The task, however, was wrought with challenges. The team found it difficult in building a user base from scratch. They had to convince people that SportsCafe bought in something different.

The team decided to focus on building highly engaging content – that had the passion of a sports blog and also got in the ethics of journalism. They also decided to bring a strong focus on social media, especially Facebook, and build various fan pages to generate an enthusiastic user base.

Unlike our website, the focus online was to be a fun engaging group and package sport in a form that appeals beyond the hard core fans. For example, our tribute video on Vijender Singh was shared by Vijender itself. We have a reach of over a million fans across our pages.

The team today consists of four writers, three marketers, over 40 guest writers, and six technical guys. Their website was launched in October last year, and the mobile app was launched in June this year.

“From our experience with the website, we realised that many were worried about data usage. To solve this, we came up with a unique lite-mode in our latest update, where users can read our content using very little data,” says Yashashvi.

Starting from 10,000 users in December, the team claims to have hit about 1.5 lakh users in March, and about five lakh visitors in June. They are looking at advertisements, content syndication, freemium model on gaming and monetising partnerships as a revenue model.

Currently, the platform is focussed on user and customer acquisition. Explaining this Yashashvi says:

“We are looking at creating a user base of around one crore, and to do that our focus simply is what is the next thing we can do for the user instead of what else we need to do to make money. Money will flow once we have the users.”

What is the competition about?

In a YourStory article, it is reported that over 300 million tuned in to watch the 2015 World Cup Cricket semi-final between India and Australia. The opening week of the ISL- India’s Football League 2014 got close to 170 million views.

Today, there are a growing number of startups that are dedicated to sports and building a sporting community – Athletheo, Playo, Smaash, Dreamsfield, PlayArena, XLR8 and PlayNLive to name a few.

SportsCafe currently is providing extensive coverage of the Indian contingent at the Rio 2016 Olympics. Yashashvi adds that they have a dedicated team to write extensively on the Olympics including summary of the previous day’s events, features on the athletes, Indian stars to look out for, analysis of Indian Olympic history as well as a steady coverage of the biggest news surrounding the event.

The platform also has a live blog that gives live updates on all Indian action and major events. It has partnered with DailyHunt and Hike Messenger for the same.

The platform is looking at adding Facebook bots to cater to every individual sports fan’s needs, Indian language content starting with Hindi, developing an online prediction game around sports which is more tailored to Indian audience with a potential to be more addictive than fantasy sports. It also aims at focusing on video content.