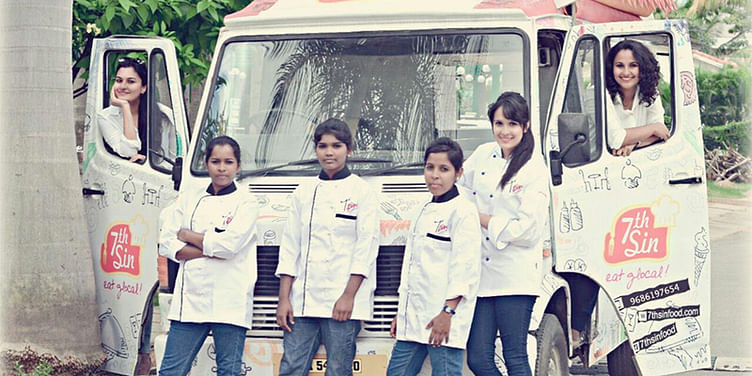 No matter what exotic location we visit, we all crave for some Indian food at the end of the day,

says Bengaluru-based food entrepreneur Archana Singh, who founded Seventh Sin Hospitality Services, the sin of gluttony, almost a year ago. After successfully running a bistro for a well known corporate enterprise and catering for multiple events, Archana, 38, has now launched Asia’s only food truck to be run solely by women.

With a woman driver at the wheel, Archana’s team of expert women chefs are dishing out some drool-worthy fusion of popular global cuisines with signature Indian flavours as they move around the city. The menu includes exciting items like chicken tikka pasta, malai veggie risotto, quesadilla with chettinad sides, Indonesian and Sri Lankan biryani, guilt-free salads, and some seriously guilt-inducing signature desserts, all affordably priced between Rs 50 and Rs 220.

While Archana’s food truck is creating a huge buzz around the country, it was a rather common problem that led to its birth. An avid traveller and foodie, Archana had studied and lived in different cities owing to her father’s Navy background before finally settling down in Bengaluru. But living on the outskirts of the city meant battling heavy traffic to get to her favourite restaurant, something she wanted to avoid.

I put my life’s savings into starting Seventh Sin Catering Company. Almost unexpectedly, Hindustan Unilever came on board, asking me to run a cafe inside one of their properties. Although everything was working just fine, I decided to do something more.

Having travelled around the world, Archana had always loved eating from of food trucks and started researching the possibilities of starting something similar in Bengaluru. She then bought a tempo and gave it to a local company for remodification. This process took seven long months and once the truck was ready to hit the roads, a couple of obstacles awaited it.

Food trucks are extremely heavy with all the equipment and a water tank on top of them, and Indian roads are not good enough to bear their weight. We were afraid that our plan would backfire. Another issue was that of finding a fixed parking space. This meant having to haggle with auto and taxi unions, something we wanted to completely avoid.

Hence, Archana and her team started by parking inside tech parks and other campuses, a move which seems to have worked out quite well for them.

Most people working in these places are away from home and miss ghar ka khana. Through our food truck, they can now relish familiar tastes in a new avatar. Our menu changes every day on the basis of the suggestions from our customers who drop their wishes in a fishbowl. Not just customers; we incorporate suggestions from our entire staff, including cleaners.

How they do it

The 18-member team is divided according to their roles. The food truck has six people including the driver, three service staff, Praveena Nandu, CEO, Seventh Sin, and Archana herself on board, while the rest of the team manages the catering business out of Mahadevapura and the Seventh Sin Glocal Bistro inside Prestige Shantiniketan in Whitefield.

Along with reputed chefs who come with the experience of having worked with renowned brands in the hospitality sector, the other staff on the truck are hired from the lesser privileged sections of society and are employed after undergoing the required training. This is Archana’s way of making women independent.

It's not always about fancy degrees; there are a lot of unskilled unemployed women who have so much untapped potential. I hire girls who have no previous work experience and come from backgrounds where they do not get a lot of opportunities. We consciously hire such women through foundations we have tied up with and train them,

The decision to make Seventh Sin an all-women-run food truck was also Archana’s way of telling women and the world that it is possible! Before starting her own venture, Archana had worked with various corporates and in the field of early education. She is a strong crusader for women becoming financially independent, something she believes also results in emotional independence.

I have always worked all my life and cannot think of a reason why someone should not work. I don’t remember the last time I took a long break from work. I have a seven-year-old daughter and worked through my maternity. I think it is extremely important for women to be independent. If a woman is financially independent, she naturally exudes a happy vibe and becomes a more secure person.

The truck functions six days a week, and on the seventh day the team distributes free food outside temples, churches, mosques, and other houses of worship. The response Archana has received within a short span of launching is indeed surreal. Invitations from tech parks, corporates, and educational institutions just don’t stop pouring in and her inbox is flooded with emails from people all over the country who send her clippings of press coverage from as far as Bihar and Madhya Pradesh. People are also willing to quit their high-paying jobs and join Archana on her exciting food truck journey. However, getting here has not been easy and with every new day comes a new obstacle.

The biggest challenge for Seventh Sin so far has been the absence of an exclusive policy for food trucks. Although separate licences for food and a commercial driving licence for a heavy- duty vehicle are mandatory, there is nothing else to fall back on.

It is still a very new concept to both Bengaluru and India. It is quite a task dealing with people on the road. It is perceived in a lot of ways.

Hence, competition amongst each other is not a factor Seventh Sin and other food trucks are considering at this point. The need of the hour is for all food truck owners across the country to come together and press the government to make the space more regulated.

Archana is now working on opening her next two food trucks in Hyderabad and Chennai. And as she goes about spreading happiness with food, she has something to say to people who are always falling short on time,

“I enjoy doing everything I do. Even after a long day of work, I love going back home and cooking for my family. But that’s just me. For everyone who cannot, you can always grab a bite from the food truck,” she laughs, adding,

Food is what I love. Find out what you love and plan your day accordingly; things will work out just fine!