[Photo Story] The journey of chocolate from farm to factory 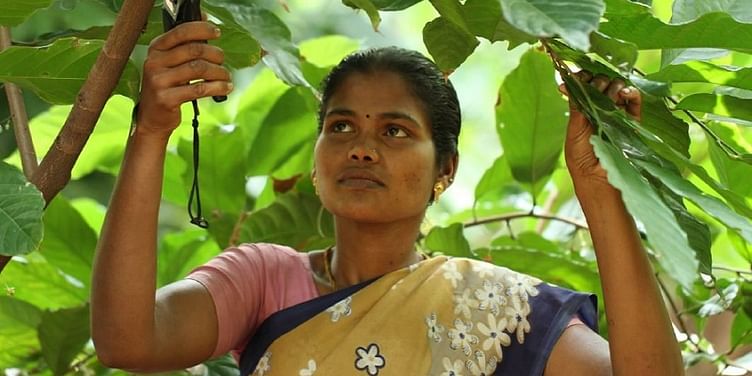 Chocolates have become synonymous with celebration and gifting across the world. The main ingredient of chocolate is cocoa, which, surprisingly, has been cultivated by man for more than 5,000 years. Cocoa was originally cultivated only in native America, and was brought to other parts of the world much later during colonial times.

Cacao trees can grow only up to 20° north and south of the equator, limiting their geographical zone to Africa, South America, Asia and Oceania. Nearly 70 percent of the world's cocoa today comes from West Africa. Cocoa reached India and Sri Lanka in the 18th century. Many more farmers, of late, have started growing cocoa as an intercrop with coconut, arecanut, oil palm and rubber. Cocoa is also grown as a mixed crop in India.

According to Tamil Nadu Agricultural University, of the varietal types in cocoa, namely Criollo, Forastero and Trinitario, Forastero types perform well in Indian conditions. In India, cocoa is grown mainly in Kerala, Karnataka, Tamil Nadu and Andhra Pradesh. In photos, we present to you a deeper insight into the process of farming cocoa in India -

The cocoa plant produces pink and white flowers in clusters that are grown from small cushions on the trunk and branches of the tree. Although there are peak flowering and crop setting seasons, these flowers grow throughout the year.

Cocoa trees begin to bear fruit when they are three to four years old, and economic yield starts from the fifth year onwards. The average per tree productivity in India is roughly 1.5 kg of dry cocoa bean, which is one of the highest in the world.

The cocoa tree requires regular pruning to maintain the shape to make it more productive and efficient. Pruning helps for the easy harvesting and care of cocoa plants.

The method of harvesting is important in cocoa to avoid damage to the cushions where the pod is set. Cocoa is a women-friendly crop and most of the cultivation operations in cocoa are done by women.

Harvested pods are heaped in shade for four to five days to facilitate pod fermentation and then the pods are opened and cocoa beans are extracted without the placenta to undertake fermentation activity.

During the fermentation process, which is done in baskets or wooden boxes at the farm level, a series of biochemical reactions occur in the beans towards developing the chocolate flavour.

After fermentation, the beans are dried. Drying beans under the sun is the most preferred method as it renders a better quality compared to artificial drying methods. The dried beans are then packed into sacks for storage and transportation.

At the factory, the cocoa beans are sorted and cleaned, and undergo the processes of winnowing and roasting, which leads the cocoa nibs to acquire their characteristic chocolate flavour and aroma. The roasted nibs undergo grinding and pressing, which leads to extraction of the cocoa butter, used in making those delicious chocolates we all love.