Exclusive: Snapdeal back on track? To turn positive at gross margin level soon 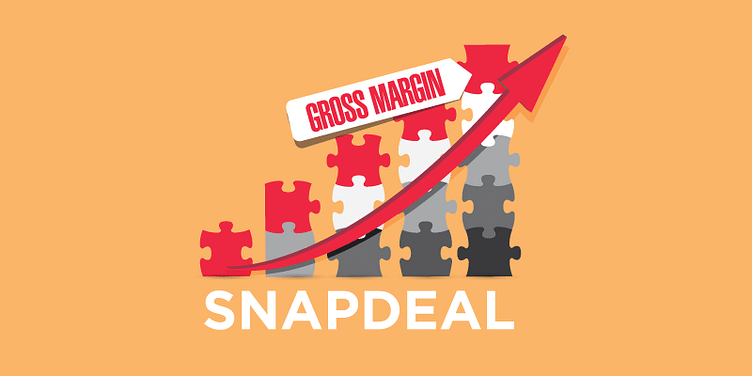 Snapdeal’s efforts to turn around its business seem to be working well. According to three sources privy to the matter, the company is very close to turning positive on the gross margin (GM) level across all categories. “Snapdeal has turned unit positive in various categories, including fashion, electronics and home & decor,” said one source. The gross margin represents the percent of total sales revenue that the company retains after incurring the direct costs associated with producing the goods and services it sells.

The company has slashed its burn rate through a slew of initiatives like layoffs, sprucing up the supply chain and optimising marketing and discount expenses.

Prior to Snapdeal, none of the e-commerce companies turned positive on the GM level (except eBay). In an email response, a Snapdeal spokesperson said,

We have made huge strides in business efficiency right through this year, led by massive improvements in supply chain and technology. Our data science-driven approach to provide the best customer experience at disciplined costs has been paying off and we are now pressing the growth pedal with our marketing thrust. By a wide margin, we have the best unit economics amongst all significant horizontal marketplaces. As a company at scale, you earn your right to grow when you make money at a unit level.

Turning positive on the gross margin level looks like a major feat for the Gurgaon-based company as it was largely surrounded by negative media reports and sentiments lately.

“New branding and the campaign ‘Unbox Zindagi’ resulted in positive impact for the company. Unlike in the past, sellers are now bearing the major part of marketing and discount expenses to push their products,” added a source.

As of now, online retailers and e-commerce players quote figures in Gross Merchandise Value (GMV). GMV is a much hyped e-commerce metric that refers to the value of goods sold over a given period of time through a particular marketplace or store. Turning gross margin positive perceived as a critical milestone for marketplace businesses (see this).

While sources indicate that Snapdeal has already turned gross margin positive in a majority of categories, it will be challenging for the company to maintain it in the long term. One of the sources added,

It’s tough for Snapdeal to remain positive at the GM level over the long haul. Snapdeal has been slashing discounts and this will impact them, as Flipkart and Amazon will continue to splurge.

Unlike Flipkart and Myntra, Snapdeal hasn’t developed in house labels or private labels in fashion. Private labels primarily help online or offline retailers snap up a healthy margin. However, according to a report published in Mint, Snapdeal has set up a wholesale unit to buy products upfront. The new unit will be largely used to tap fashion brands that prefer selling goods upfront to e-commerce firms.

Snapdeal’s attempt to buy Jabong and strengthen its fashion quotient also failed as Flipkart snapped up the Rocket Internet-funded online fashion platform for about $70 million.

This year, Snapdeal has lost a considerable portion of its market share to rivals Amazon and Flipkart. While Snapdeal’s GMV has grown by 90 percent in FY 2016, it failed to meet its GMV target by almost two-thirds. The company projected itself to have $10 billion GMV by FY 2016, but according to Softbank’s data, it sold about $3.8 billion worth of goods in the last fiscal year.