[Startup of the day] Hiring platform for the creative industry, Talentrack is targeting Rs 10cr in revenues by 2017–18 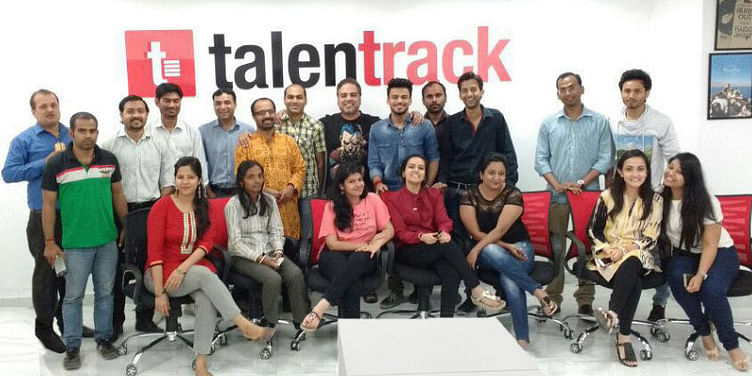 Vineet Bajpai is best known for establishing the large digital media agency Magnon Group, which he started in 2000 at the age of 22. After NYSE-listed Omnicom Group acquired a majority stake in Magnon Group (which has two digital and advertising agencies- Magnon\TBWA and Magnon eg+) in 2012, Vineet headed the TBWA India Group from March 2014 to January 2016.

It was in January 2015 that the idea of talentrack germinated in his mind. He then spent months researching the media and entertainment space, which resulted in the unfolding of a few glaring facts- the media and entertainment industry is the second largest employment generator of the Indian economy after IT & ITES. Currently valued at $21 billion, the industry is poised to touch $100 billion by 2025.

Unlike the tech-enabled and organised talent-hiring in the corporate sector, enabled by the likes of Naukri.com, LinkedIn.com and TimesJobs.com, the media, entertainment, creative and art space (MECA) is yet to witness a similar platform for the hiring of artists. This caught the attention of Vineet, and led to the launch of Talentrack in January this year.

On getting an initial round of funding, Vineet boasts,

We raised a seed-capital of $1 million from Unigrowth, a Canada-based India-focused investment fund, and two HNIs over the first six months after starting. While VC sentiment was at its lowest when we hit the market (February 2016), we were able to raise this round efficiently.

Creating a pool of recruiters

Talentrack primarily started by offering the free access of a huge database of artists to recruiters, and handheld them through the entire process of recruiting. The startup claims to be the official talent-partner for the reality show ‘The Voice India 2016’. It is also working with Shashi Sumeet Productions and Radio Mirchi.

For instance, they were present with a registration desk at the Bharat Rang Mahotsav, the annual festival of the National School of Drama. It also exhibited at the FICCI Frames 2016. Talentrack is among the primary sponsors of the Indywood Festival 2016, to be held in September at the Ramoji Film City in Hyderabad.

Talentrack claims to have over 80,000 self-registered artists from across over 600 Indian cities and towns, with a stronghold in Mumbai and Delhi NCR. All together, it generates 25,000 job applications and auditions per month.

Talentrack has a variety of revenue streams. Apart from a database subscription fee from recruiters, amounting to Rs 2.4 lakh per annum, they draw membership fees from artists, who can avail one of three different packages- Rs 5,000 for three months, Rs 8,000 for six months and Rs 14,000 for one year.

Talentrack has worked with EndemolShine Group as the national talent-partner for the reality TV show The Voice Season 2. Here, it generated revenue by holding web-based reality talent-hunts and artist-generated branded content-creation.

In the next month, talentrack will launch talentrack Launchpad, and is expected to drive a considerable amount of public-curated digital content through this platform. According to Vineet, talentrack is looking to generate revenues to the tune of Rs 10 crore by FY 2017-18. Currently, talentrack has a team of 35 people across offices in Mumbai and Delhi. It is also hoping to partner with reality TV show Bigg Boss for its next season as well.

The online hiring space has lately seen a surge of entrants, who are increasingly becoming the go-to platforms for job seekers and recruiters alike. Mobility has also played a significant role in cutting down the turnaround time and driving high efficiency.

Hiring today is not only about sourcing, interviewing candidates, and getting the vacancy filled, it is about making the right match of the required job role to a candidate’s capability and vice versa.

Venkatesh Peddi, VP, IDG Ventures (India), in an earlier interaction with YourStory said, "In the last couple of years, the online hiring space in India has witnessed the entry of several startups that are working on different aspects of the recruitment function, to bring in more efficiencies using technology and disruptive ideas. We estimate that the overall spend on technology around recruitment in India is expected to grow to $4-5 billion by 2020.”

Online marketplace for entry-level and blue collar jobs Aasaanjobs raised $5 million in a Series A round of funding in November 2015. Babajob, through its RapidHire platform, drives inbound phone calls from screened candidates to employers. The startup secured $10 million in funding in April 2015. Bengaluru-based job portal Hiree, which raised Rs 18 crore from IDG in early 2015, recently got acquired by cross-category classifieds platform Quikr.