Shocked by government-school standards, this organisation partnered with them to start 100pc fee-free world-class schools for poor 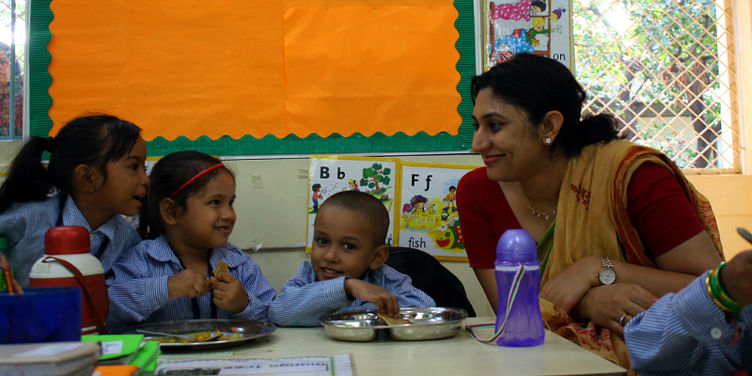 India has made great progress in recent years towards its goals for primary education for all. However, in government schools, the quality of education has been on a downward spiral. Our atrociously classist schooling system abets a vicious cycle – on the one hand, the lack of resources, lucrative salaries, perks, and quality of life at work fail to attract qualified teachers with so-called “premium” educational backgrounds. This factor breeds lethargy and apathy in the ones who do sign up. In turn, the same teachers foster a class of untrained or undertrained, unmotivated youth, who would potentially go on to become the future pool of teaching talent for government schools.

The result? Recent studies show that 75 percent of government schools students in Grade 5 are unable to read a Grade-2 level story. 13 percent of them cannot identify the alphabet. The poorest children are falling through the cracks and not receiving the opportunities and education they need to succeed in life.

An Ark for the poor

‘Absolute Return for Kids’ or Ark, wants to change this. “Our aim is to operate in partnership with the government and serve the poorest children, albeit raising the benchmark in the quality of education throughout India,” says Kruti Bharucha, India's country head for the UK-based Ark Society. It is an effort to destroy the classism in education and prove that children from all backgrounds could and should have the opportunity to achieve their potential.

The Ark Society model is time-honoured, as they have been running 35 completely fee-free schools in the UK through a public-private partnership. They set sail for India when the government was eyeing partnership schools as a surefire way to overhaul underperforming public schools. Thus, they launched the first Ark school in Delhi’s Lajpat Nagar in July 2015, in partnership with the South Delhi Municipal Corporation (SDMC). They are even working with the Delhi government on issues of broader education reform.

The school is non-selective, which means that they do not restrict themselves to any set criteria while identifying beneficiaries for the school. “We admit all those in need for a good quality education,” says Kruti, adding, “and before starting up, we spent a considerable amount of time getting to know the low-income communities near to the school, to understand its dynamics and how parents make school choices.”

They held a series of door-to-door surveys and information events and placed admissions stalls to inform low-income parents who had started sending children to private schools because they were disillusioned with the public education system.

Currently, their families come from eight low-income communities located between 2 km and 4.5 km from the school, with an average family income between Rs 8,000 and Rs 10,000 a month. Most of their children are Hindi speaking, with a few whose mother tongues are Tamil, Nepali, Bengali or Punjabi, as well.

When they started out, the learning levels of the children were very low. Most were first-generation learners and had never read. And their vocabulary was significantly inferior to children from affluent backgrounds. “The children we serve have not had access to toys, learning materials or books, all crucial for cognitive development,” Kruti recalls, adding, “and some of our pupils have had no prior experience of schooling.”

So, consequently, they had a lot of ground to cover in a short period. Hence, the school, counter-cultural, as they call it, recruited teachers from top colleges through an extremely rigorous selection process. They receive extensive training in practical, effective techniques for teaching young children the basics of early language, reading, and writing and mathematical concepts such as number, size, and shape. Their focus is on mastery of Mathematics, English, and Hindi. Colourful and interesting teaching-learning materials are used to ensure children are engaged and have plenty of opportunities to play collaboratively. In just over one year, they were able to sort and name colours, identify and name shapes, create patterns, compare sizes, and were beginning to develop a number sense and a broader vocabulary.

Learning how to help one unlearn

“Many of our parents were initially a little nervous about our approach. Being used to rote learning as the only method of teaching and notebooks being filled as a matter of course, many worried that their child was spending their time at school simply playing,” she says. They had to invest resources and time to ensure the school has a strong relationship with parents. Their social workers spend a lot of their time conducting home visits for constant parental engagement, where the virtues of practical learning and the need for consistent attendance and discipline are explained to them.

Another huge success in their debut year has been student behaviour. “When the children started school with us in July 2015, few had any understanding of expected classroom behaviour. Now, we have developed strong school routines and students know how to listen to instructions, pay attention, participate, work with their peers, and are truly getting the most out of the school day,” she says.

Ark Society’s emphasis on good hygiene, regular health check-ups, and the provision of an additional meal have significantly improved the health of many children, but illness remains a challenge.Despite that, the school has maintained an attendance level of 82 percent and a retention level of 95 percent last year. The most heartening thing is that parent attendance at their quarterly parent-teacher meetings averages 93 percent.

To scale this first school, and successfully establish their model,they are seeking philanthropic funding to cover operational costs for the next five years. “We anticipate this support coming from a select group of between five and ten donors, who can provide catalytic funding for our school programme,” she explains.

They are also working to secure their partnership with the South Delhi government with a view to receiving government funding support to fully cover their school operational costs. “We have developed teaching and training practices, a sustainable and replicable curriculum, and school management strategies that can be adopted by the government. We would like our first school to be the catalyst that leads to the creation of a network of public-partnership schools over the next five years,” she concludes.