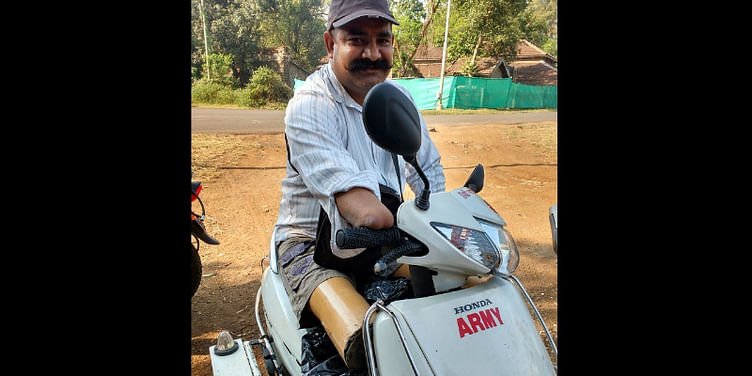 (Soldiers must always march forward, never looking back or turning around in their paths. Come hail or storm from all ten directions, a soldier must only march forward.)

Most children of Maharashtrain soil, who are inherently valorous and patriotic like the Maratha warriors, have only grown up humming this couplet; but Deepchand Prakhyat lives it. Many soldiers who fight for the country lay down their lives and become martyrs, and multitudes more sustain permanent, often life-altering, injuries- but becoming disabled in combat is a matter of immense pride for most jawans.

However, having near-death experiences while doing extraordinary work in the greatest wars of the past three decades, and then becoming disabled in an accident is a sorrowful tale for any soldier, and only a few tell it with a renewed zest for life. Fighting enemies of the state, death and destiny with equal obstinacy, war veteran Deepchand Prakhyat’s spirited narration will leave you in awe.

Hailing from Hissar in Haryana, Deepchand Prakhyat came to Maharashtra for his military training. He started as a brave gunner in the 1989 Light Regiment. After procuring his army medal in 1989, he was posted to a part of Kashmir, where General G. K. Mehendiratta was in command.

In his decades of service, he fought in the Kargil war and also went undercover in the Lashkar district of Kashmir to carry out several risky operations. Even today, there is patriotism, kindness and undying loyalty to his army days in all his words. Deepchand insists that his work can only be testified to by his past commanding officers, as it becomes evident in the course of the interview that the hero is too modest to speak of his own feats. So, we get in touch with Colonel A. K. Mehendiratta.

During the insurgency and terror threat in Kashmir in 1998, Deepchand’s regiment was stationed in a small post near Gulmarg. Colonel A.K. Mehndiratta tells us that a soldier like Deepchand was rare to find, and this thought was echoed every so often by the soldiers in the regiment. At that time, Deepchand was deployed by the Army intelligence as an undercover agent, living among Kashmiri locals, along with five or six of his colleagues – with the risk and responsibility of discovering the hiding places of terrorists upon their shoulders –Deepchand being the acting chief of the group.

No allowed to carry weapons, Deepchand ended up learning everything from the local language to the Kashmiri way of life in that six month period. It was after relentless surveillance that he and his team submitted a report stating that there was terrorist activity in a small village of 50-60 houses called Dargam.

His information turned out to be accurate. Knowing that the army was active at night, terrorist groups operated during the day. With the help of Deepchand’s quality intel, a plan was devised. As per the plan, commandos in disguise - including Deepchand - surrounded the house. But the terrorists in the building were alerted to the army’s presence by women living on the ground floor of the building. A firefight ensued, after which the building was laid siege to by the jawans.

Forbidding anyone from entering or leaving the house, the firing continued all day and into the night. By morning, they managed to kill both the terrorists, but one of our men was sacrificed too, and another officer was injured. Operation Dargaam was widely hailed by the media.

“In our two years there, we managed to make that area completely terror-free, simply because of courageous soldiers like Deepchand,” says the General. Because his men were scattered intelligently across locations, terrorist operations in 50 villages within 40 sq.km. were cracked down upon with ease.

Deepchand’s regiment also had a part to play in the victory at Kargil. Stationed at the border around May 1999, they were armed with 120 MM motors that could fire as far 8 km into enemy territories, with enemy troops similarly being able to attack deep within Indian territory. Deepchand also commanded that operation, and fired over 15,000 bullets. His sole job was to target and destroy the ammunition of the enemy.

Soon came the vicious attack on the Parliament building, creating a tense war-like situation. Deepchand’s regiment was posted to Rajasthan at the time. With no sleep for days and nights on end, his regiment was on ‘standby’ mode constantly, ready to be deployed to fight at Pokhran as soon as insurgencies surfaced, but the matter was being resolved through dialogue. That was when the fateful incident transpired.

They were just in the process of packing up their belongings from Barmer after the situation subsided when there was a misfire and one of the canons exploded, injuring three men. Amongst them, was Deepchand.

Colonel Mehndiratta gets a little choked up at this point. “The soldier that fought bravely and escaped death in Kargil and Kashmir got brutally injured in a blast like this. It was so serious that doctors had told us that there was almost no chance that he would wake up and recover,” says the Colonel. “But I told the doctor to revive him at any cost. That was when he informed me that Deepchand had lost a lot of blood, and that they would have to amputate both his legs and one of his hands. Even then, there was no guarantee that he would survive the ordeal. I was prepared for the worst,” says the Colonel.

Still some fight left in him

The operation began at 4 am, and Deepchand regained consciousness only on the next day. 17 bottles of blood, and the prayers of all the comrades he had entertained through singing, dancing and making merry while they were out at war before the era of the TV, he says, are what got him through the risky surgery.

“Both legs gone, one hand lost, and yet, Deepchand didn’t once rue his situation,” says the Colonel, adding, “In fact, when he regained consciousness, he was reassuring me that everything would be all right, instead of it being the other way around! There are very few men as brave as him.”

“When I found out that I had lost my limbs, I did not once think about myself. I was only concerned about my wife and my one-year-old son. When my wife came to see us, I’d cover up with a pillow or a blanket, because I did not want to put her through the trauma,” recalls Deepchand.

We ask him if he received any aid from the Indian government post the accident. His answer to this question was short and heartbreaking- “This did not happen at war, you see.”

Faced with his new reality, he never once wallowed in pity or hatred – he knew that he would be able to survive this last and ultimate challenge with acceptance and optimism. And sure enough, today, he is living his life in an absolutely self-dependent manner.

“At the hospital, there were hundreds of injured soldiers with me, many of whom were alive, but almost like lifeless corpses. Some couldn’t even get up without support, and one colleague even lost his eyes. I was the most fortunate of them all, in that I learnt to stand and walk without both legs. If you want to truly understand your blessings, look at those less fortunate than you. You will never learn such philosophies about life from a guru – these learnings come from a human being who has truly lived,” he says.

His children are in school, while his wife now has a government job, which she procured with great difficulty. Unlike other people with his condition, he has trained himself to get around without a wheelchair. Relocated now to Maharashtra, he lives in the township of Devlali in Maharashtra’s Nashik district, a retirement haven of choice for many officers.

Soon, his second son came along, and life’s greater joys made sure he always counted his blessings, and never his sorrows. A true mark of his independence is that rather than relying on others for help, he in fact puts his own abilities to full use and contributes fully to all the chores of the household.

Eventually, he even started his own provision store, in order to send his two sons to medical school someday – for this proud man has refused to accept help from anyone, to this date. “I have fought from the jaws of death, and all the credit goes to my doctor. So, of course, I would be immensely happy when my son becomes one!” he says.

In his provision store, he also provides the services of bus and train ticket bookings, air travel booking, mobile recharge, jeevan bema premiums and all kinds of payments. His wife and children also join him at the store and assist with his work in the evening, which is something that he heartily cherishes.

Today, all the officers that once fought alongside him avoid visiting him even if they are in his town. His own wife’s family sometimes looks down upon his disabilities, but he says he is still a lucky man, for he gets to live with his wife and kids. “What else do I need?” he says.

As if fate hadn’t piled enough adversities on his path, two years ago, a fire at his store caused losses of nearly Rs 3-4 lakh. But this braveheart was never deterred. He dusted himself off, stood up straight again, and started over aggressively and enthusiastically, saluting life. Deepchand certainly serves to create a mental image that all of us can fall back on when life flings anything at us that we think we can’t handle.