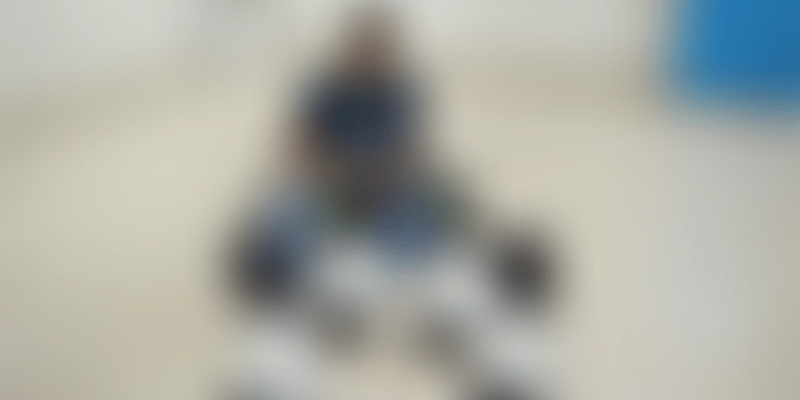 This story is sponsored by Dell

The challenges of interacting with family and friends spread across the globe while living life on-the-go is something that people constantly face.

While there are many apps and technologies that help bridge the barrier, they are not always effective. The reasons range from older generation not being technology-savvy, young children being uninterested in interacting in front of a screen, to the complexities of infrastructure and technology itself.

It was personal experiences like these that led to i2u2 being founded, says innovator and entrepreneur Dr Myshkin Ingawale, who has been supporting the startup from its inception. i2u2 is built as the simplest and most affordable telepresence robot which can be controlled remotely through a mobile, tablet or PC via an app connected to the internet. It allows people to interact, monitor, play and move around, with family, friends, or colleagues, enabling the user to be virtually present at the location where the robot is present.

Since i2u2 can move around, it helps to monitor your home or office while avoiding blind spots that fixed cameras may have. The system consists of two parts; the controller app – which remotely controls the robot, and the robot app – which acts as the head for the robot hardware. i2u2 is approximately 2 feet in height, has a fairly standard design, a base with wheels for motion, a heart-shaped light functioning as an indicator, and a screen at the top where you can plug the smartphone device.

It’s really simple to use i2u2, explains Aman Kajaria, co-founder, “All users have to do is unpack the robot from the box, charge it, connect it to a tablet, configure the i2u2 app, and you are set in less than 10 minutes.” Apart from a 4-Mbps+ internet connectivity, all you need is an overnight charge to run i2u2 for a full day.

i2u2 has more advantages than a pure video calling solution because, “The user ‘dialling in’ has full control of both video and mobility of the device (the robot) in the house and can freely move the robot around different rooms, 'see' and be 'be seen'. This enables a more natural interaction,” says Aman.

In addition, it also comes with features such as auto-answer, people detection, fall avoidance, on-screen and voice feedback, which make it easy to use for non-techies and elderly people. Remote users also can navigate the robot through voice commands and hand gestures, in addition to on-screen controls. Sharing more about the auto-answer feature, Aman says, “The i2u2 robot can be controlled remotely via the auto-answer feature, and the remote user can take have full control over video and motion around the house. This could prove to be beneficial to working parents and professionals who want to check in on pets, children or even elderly family members.”

The story in a byte

The startup, which was incorporated formally in June 2015, took six months to get the prototype ready, nine months to build the MVP and 14 months to ship the product to their first customers. The co-founder says, “We have started shipping the product to our first 100 users in India. We are taking more pre-orders. The response has been amazing. Thanks to the feedback from our first set of users, we already have enhancements ready for the next batch, both in hardware and software.”

It is here that winning a contest like DELL Startup Challenge helps a young startup like i2u2. “Winning validates our idea and demonstrates that the industry recognises the potential of the idea,” explains Aman.

i2u2 is also launching two crowdfunding campaigns soon. The first one in October on zingohub – for India, South Asia and Middle-East, and the second one in January – a global campaign on Kickstarter. Aman says their long-term goal is to convert i2u2 from a product to a platform, giving users/ developers the option to build their solution on top of their hardware & software.

“For i2u2 to become simple and smart, design and technology play a decisive role. For e.g. real-time communication between two users, autonomous navigation, voice commands, etc. are critical for good user experience and can only be implemented using state-of-art technologies (software & hardware),” he adds.

Hacking their way through challenges

Talking about their early days, Aman says, “While we had a fair idea of ‘why’ and ‘what’ was to be built, ‘how’ was a still a grave question. The initial months were spent on user study, research and trying out various technologies. As a team, we have always believed that the best way to build a hardware product is to spend more time on execution than just ideation.”

As a product startup trying to navigate its way in the Indian startup ecosystem and grow, they faced many challenges. “From ideation to building a shippable product, there are new challenges at every stage,” says the co-founder. The biggest has been hiring the right people who are talented and motivated, even when there aren’t adequate resources. i2u2 is hacking this challenge by partnering with other startups to share resources and working with a team that’s a mix of experienced professionals, freshers and interns. The team designs, builds, and assembles the robot in-house and i2u2 is among the first completely “Made in India” consumer robots of its kind.

Developing a quality product with quality modules like software and electronics and finding the right set of vendors to get fabrication done are other pain points. Today, the challenges have evolved from building the product to selling it. “At the moment, we are earning revenues by selling the hardware. In the long-term, the idea is to develop i2u2 as a platform and sell customised software solutions,” shares Aman.

I2u2 has raised angel investment from Dr. Myshkin Ingawale, who has been part of the startup’s growth story since its inception. The startup plans to raise about $500K in the coming months.

Myshkin has served as Chief of Staff at Xiaomi India, helping them set up the India business, and has worked at McKinsey across the banking, technology, pharma and healthcare sectors. He co-founded Biosense, a globally recognised company designing and building innovative, disruptive healthcare technologies. As a researcher at the Massachusetts Institute of Technology, he was part of the team that conceptualised and built the Copenhagen Wheel which has now spun off as a venture – SuperPedestrian.

Myshkin holds a PhD in Management Information Systems from the Indian Institute of Management, Calcutta, is an Aspen New Voices Fellow 2014, TED Senior Fellow 2013, TED Fellow 2012, and has been recipient of numerous other awards. Aman says, “Myshkin’s past experience in starting and scaling up a medtech product startup like Biosense as well as a consumer product giant like Xiaomi has proved to be extremely valuable for us. From learning how to build a prototype rapidly to devising go-to-market strategy, he has guided us at crucial junctures.”

Navigating the path ahead

The motivated bunch of engineers, designers, coders, artists are continuing to work on making i2u2 the simplest, smartest and the most affordable telepresence robot. “We are experimenting with upcoming technologies, making iterations to improve the quality and user experience. We are also constantly talking to our customers to get their feedback, attending meetups to meet geeks, business experts and stay abreast with the latest technological happenings,” says the co-founder.

The team is working on bringing in some interesting features like integration with home-automation solutions, person or object detection and recognition followed by autonomous navigation towards it (for instance to track and follow a child at home), elderly care via more natural and non-intrusive interfaces, intelligent reminder systems for medication adherence, among others.

Has the team been able to bust any myths associated with product startups? “Well, none yet. All of them have unfortunately been true. It is difficult to build hardware product startups,” expresses Aman. He adds, “There are a few learnings that have helped us. The first few members define the startup, hence building the right team (a mix of experienced people and freshers) is very important. Patience is key. One would run into several unpredictable or even unthinkable issues every day. We keep learning from them. User study is critical. Our aim is to build breakthrough products that solve some problems. Innovation needs to be a continuous process, otherwise competition will over-run you.”

Aman believes that technology plays a very critical role for a product to transition from an MVP to a robust and intelligent consumer robot. “Being ‘better’ is just not good enough. You have to aim to be the best,” he signs off.