Indian dentists are abandoning their profession for BPOs, this startup wants to change this 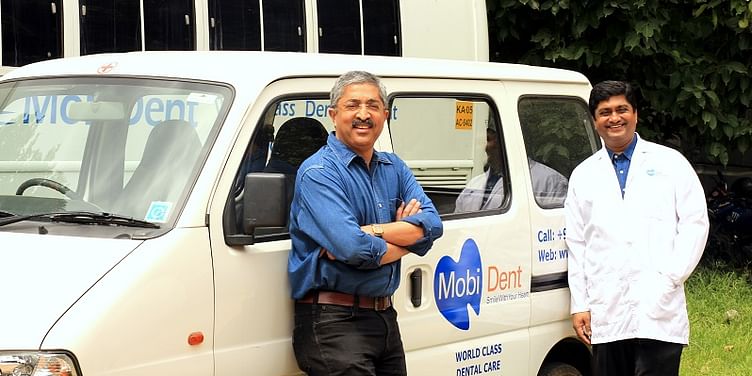 Fact: 30,000 dentists who graduate from dental colleges annually have no industry waiting to hire them.

Most of them end up joining their seniors or faculty members in practice, earning as little as Rs 5,000 a month. The market scenario demands that they set up their own practice, which costs no less than Rs 10-12 lakh in initial capital investment, taking easily five to seven years to pay off.

Further, not having any godfather in the industry makes it even more difficult, because dental colleges teach students to practise dentistry and not to set up a practice.

There have been cases where dentist graduates have even left their jobs to join a BPO, finding it more lucrative. But for some, it’s just the hope of something big that keeps them aligned to the profession.

Now, let’s see the other side of the equation.

While the World Health Organisation advises dental checkups every six months for a child and every year for an adult, reports suggest that barely five to ten percent of the Indian population goes to the dentist.

Some factors attributed to as the cause are lack of awareness, perception of pain, expensive treatments and the lack of time in daily lives. In fact, there doesn’t even seem to be a concept of preventive care for the population.

Hence, it seems like the whole business is designed to fail.

Changing this are entrepreneur of 12 years Vivek Madappa and Dr. Devaiah Mapangada, who has over 20 years of dental practice in India and Switzerland under his belt, through their Bengaluru-based venture MobiDent.

Working as a formal organisation in a fragmented industry, their startup houses close to 33 in-house doctors. Providing the necessary exposure and finishing school experience through a training academy, the venture plans to take this count to close to 300 in the next year.

Dr. Devaiah (Dev) was always kicked about making dental services mobile, taking them outside the traditional boundaries of a clinic. In India, he built a fully-equipped mobile van in 2012-13, taking it to IT campuses. After six months of operations, he wanted to scale the business.

Around the same time, in 2013, he got in touch with serial entrepreneur Vivek, who had already built four companies and had two successful exits to his name. On hearing Dev’s proposition, Vivek agreed after giving it proper thought, with one suggestion in his head -to scale the business, they had to make its solution portable rather than mobile.

And voila, the duo did just that!

Designing a portable dental clinic with a portable chair of only 12 kilograms, the MobiDent kit can be carried and transported anywhere, including in an Uber. According to Vivek, the kit costs only Rs 75,000 to build, unlike a dental clinic, which can cost close to Rs 12 lakh.

Starting in July 2014, MobiDent began its journey with only four doctors and two units, targeting corporate companies, while approaching the respective HRs for setting up free dental checkup camps.

Vivek tells us that, on average, 80 -100 people used to walk into the camps every day, with close to 70-80 percent of them suffering from some kind of dental problem that they weren’t aware of. 40 percent of them used to agree to get treated at that very point.

Over the last two years, the firm claims to have conducted camps in close to 400 companies.Some of the big names among these companies are GE, Infosys, Intel, TCS and Cognizant.

After tasting sweet success with corporates, MobiDent kicked off their second strategy, approaching hospitals, in February 2015. Vivek says that at most hospitals, only dental consultation is available in the OPD. Further, they lack the facility of executing a practice.

Hence, the firm approached hospitals with the value proposition of setting up a clinic. Within the first month, the company roped in Columbia Asia hospitals, earning over Rs 3 lakh in revenue.

The founders tell us that every hospital has one to two doctors assigned by the company, holding one dental kit for execution. Today, the firm works with 19 hospitals in the West and South Indian markets, including names like the Sahyadri chain of hospitals in Maharashtra and Rainbow Children’s Hospitals, among others. They are also present in seven of Columbia Asia’s hospitals. MobiDent have seen 10,000 of their 44,000 patients coming out of these 19 hospitals.

As per the agreement with the hospitals, 20 percent of the treatment fee for a patient goes to the host hospital.

But Dev and Vivek didn’t stop there. They wished to take the idea a tad bit further. This year, in August, the firm introduced their home vertical.

Targeting the whole family, MobiDent launched a Family Dental Protection Plan, which has catered to 250 households in just two months.

Providing a ‘mouth spa’ as a part of their preventive dental care checkup, the firm offers deep cleaning, scaling (plaque and tartar removal) and polishing in the plan. Annually priced at Rs 2,750 for a family of four to five members, as a part of the plan, the firm offers two of these preventive checkups in a year. For couples, the same plan is charged at Rs 1,750, while for individuals, the charge is fixed at Rs 950.

On noticing a serious problem, the doctors are equipped to treat it, billing the customer extra for the procedure.

Customers can book an appointment either online through MobiDent’s website, by giving a call to their helpline or through an enquiry at any of their free offline dental camps. The founders believe that the startup has followed frugal marketing until now.

Vivek says that only the most experienced doctors get to do home treatment,

It is only when doctors have finished at least 2,500 procedures, including all kinds of dental procedures, that they are permitted to treat people at home. This is because you might be treating people who don’t know if they have a problem. Also, we make sure that these doctors have good social and hospitality skills, because if you have to be invited to someone’s house, you are supposed to be trusted.

Further, everything is documented, with customers being sent soft copies of the diagnosis through WhatsApp or email.

We have been able to formalise and build processes through our academy, hiring and other initiatives over the last two years. Over this time, we have tried to make the intangible things tangible. Further, we hire doctors only with three to five years of experience and train them over time, with each doctor doing close to 50 checkups every day.

MobiDent also has a proprietary digital platform at the backend, which provides the technology backbone to the company. It provides real-time analysis, controlling everything from CRM, patient history and logistics to billing, inventory and finance. The efficiency of the system is the reason why the firm has only three people in management (apart from the doctors), with the complete operation handled by the technology backend.

In the next year, based on the performance of its home services, the firm plans to open its services to the top 10 metros and mini-metros. Currently, MobiDent serves only four geographies - Bengaluru, Pune, Mysore and Ahmedabad.

It is also looking to raise additional funding in March, next year. The company has global ambitions, having already set up its first clinic in Kenya, and has plans to expand into the African and South Asian markets.

Reports suggest that the dentist to population ratio in the urban market is 1:9,000, while in the rural areas, it stands at 1:200,000. Further, the value of the dental equipment and laboratories market is estimated to be $90 million annually. This makes dental treatment in the country a highly expensive process.

Therefore, there is a need for companies like MobiDent to enter the accessible healthcare market, making things cheaper, while at the same time, making the process more efficient.