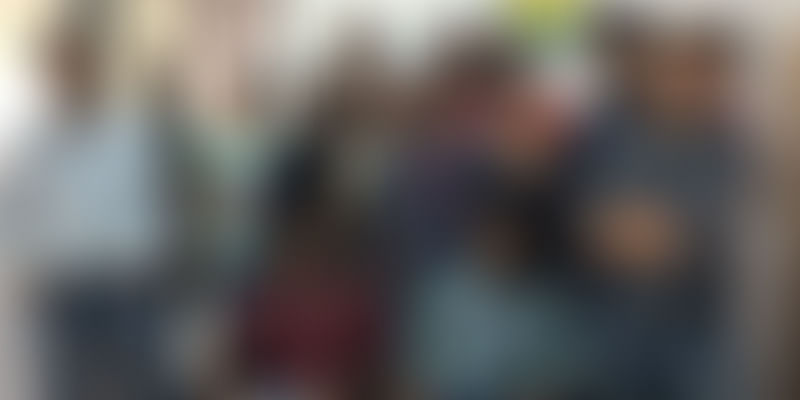 We aim to reach a monthly usage of 15 million users within 12 months without any ad spends and relying entirely on content marketing. The ways to build usage in this segment are content marketing, word of mouth, and by letting Google reward you with search traffic,” says Konark Singhal, Co-founder of Sarkari.Jobs.

From casual meeting to business idea

IIM Bangalore alumnus Konark met Manesh Jain (an MBA from Asian Institute of Technology) at a Headstart event in Gurgaon in 2012, and the meeting soon turned out to be the first step in the entrepreneurial journey they would undertake together. In no time, the duo started their first venture, SourceWeb. Its flagship product, Procurepack, was acquired by Xeeva, a US-based enterprise software firm.

Having been in the startup space for some time now, Konark and Manesh took the plunge into the online test prep domain with MockBank Learning Pvt Ltd in July 2013, a venture in which they were joined by Manesh’s former Sify colleague and University of Mumbai engineering graduate Ramesh Narayanan. Under the umbrella of this parent company, MockBank provides test prep for public sector jobs, with preparatory courses for more than 200 public job examinations.

In the course of Konark’s meticulous interactions with customers, he discovered the urgent need for a credible source of searchable information about public sector jobs, in the absence of which candidates often end up making uninformed decisions.

The urge to address this issue gave birth to the idea of Sarkari.Jobs, a mobile-first and multi-language search engine for all strata of government jobs, launched in May 2016.

As of September 30, Sarkari.Jobs had attracted six lakh users who had visited the platform 1.9 million times. Konark claims that in September alone, the platform had one million hits and that traffic has been doubling every month since the launch.

Sarkari.Jobs helps users zero in on relevant content by providing 14 filters including location, salary, nature of job, and tenure (permanent/contract/internship).

Konark speaks about how the likes of Zomato and Flipkart make their restaurant menus and products searchable with myriad filters to produce relevant results. He adds, “These filters make this platform disproportionately superior to the myriad blogs and lists. We make it possible by collecting up to 90 attributes for each job post.”

The next big aim of Sarkari.Jobs is to get a job notifications bar at all levels of government — central, state, municipal, village, PSUs, universities and research institutions and quasi-government like cooperatives. Sarkari.Jobs already has listings in six languages (English, Hindi, Tamil, Telugu, Malayalam, and Kannada) and will expand to all 22 scheduled languages of India within the next six months. The information is procured through web crawling, monitoring newspapers and magazines, user-suggested notifications, and more.

Backed by the parent company

Both MockBank and Sarkari.Jobs are funded by the balance sheet of MockBank Learning Pvt Ltd. The company raised $400,000 from Blume Ventures and angels in 2015.

What are Sarkari.Jobs’ monetisation avenues? While one avenue will be advertisements on the platform, another will be to become a marketplace for online test preparation players like Byju's,Career Launcher, and TIME.

Considering that the bulk of the test preparation market is still offline, Sarkari.Jobs will connect candidates with tutors in the vicinity. The startup will also drive affiliate revenues by suggesting the right books (for preparation) from Flipkart and Amazon. Konark stated that the book sale has already been piloted and has enabled sales worth Rs 5 lakh in the last couple of months.

Sarkari.Jobs covers 80 percent of all public job listings, which will be pushed to 99 percent within six months. The team size is 16.

According to Mary Meeker’s Internet Trends Report 2016, India is the only big internet market with accelerating growth, with jobs becoming one of the primary use cases of the country’s next internet billion. While speaking of jobs in India, one cannot ignore public sector jobs.

The top five cities that generate significant traffic for Sarkari.Jobs are Delhi (25 percent), Kolkata (9 percent), Lucknow (7 percent), Pune (6 percent), and Bengaluru (6 percent). According to Konark, metros show an unusually high number due to temporary migration from nearby catchment areas. The total number of job posts (165 cities across 35 states and UTs) on Sarkari.Jobs is 8,000, with 2.5 lakh vacancies. The salary range is Rs 500 to Rs 3.3 lakh per month.

“While there are a large number of blogs that have spotty listings of government job notifications, there is absolutely no way to search and filter through the mountain of information. Overall, there are 30–40 million sarkari naukri aspirants in the country. The recently released Google Digital Trends report says that sarkari naukri (सरकारी नौकरी) is the largest searched indic term,” says Konark.