Who is Jaduman and why is this girl painting him at railways stations across India? 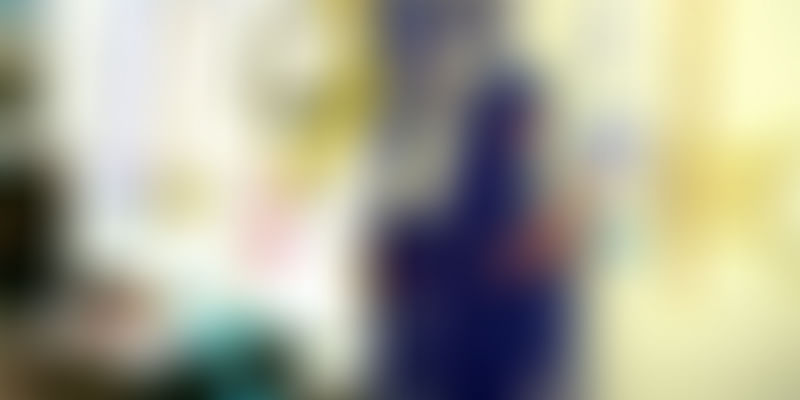 Unfortunately, even the Swachh Bharat Abhiyan has not been a clean sweep. Although several places have wall paintings and pleasantly instructive messages, they are not read and followed by as many as we would like. These messages, while great efforts, needed a unifying force — perhaps a mascot — that really captured the nation’s ire at its citizens’ apathy. And there was no one better suited for the role than the same nation’s unsung hero — the sweeper — wielding his humble weapon, as a mad world compels him to use it more than he must.

Gayatree Joshi is a Mumbai-based “freelance social worker” who volunteers her time and myriad talents including artwork, dancing, cooking, and teaching to any organisation that needs them. The plight of Mumbai’s public places had her at her wits’ end and when she had the bandwidth and enough funds collected, she decided to‘deface’ the walls of railway stations with the face of one angry public worker who had had enough — the Jaduman.

“Every day when I’m outdoors, I observed that no thinks twice before littering, even if it is in a freshly cleaned spot. I really felt that I needed to create something powerful to get through to people. As I'm a cartoonist and draw for social causes only, I created the Jaduman for my next mission,” says the 32-year-old, who paints professionally and dedicates most of her earnings to her philanthropic ventures.

“The Jaduman idea truly took shape when I saw my colony’s sweeper cleaning over and over all day long,which was also the plight of our local BMC sweepers or “jhaaduwaalas.” I wanted their voices to be heard and for them to get better jobs.And if we stop littering and be responsible, things may change,” she adds.

The Jaduman (subject to copyright) is the hero we need but not the one we deserve. From streets and stations, subways and rooftops, the exhausted figure says, “Thak gaya hoon bhai, jhaadu maar maarke. Ab baar-baar jhaadu nahi marunga,” as described by Gayatree. (I’m tired of sweeping over and over, and I’m not going to do it yet again.)

His attire is modelled on that of our local cleaners. He is angry at our delinquencies. And yet he is a cartoon so that he stays relatable and endearing.

Once the Jaduman was ready to take to the streets, the freelance social worker took stock of her collections from her project ‘Paint for a Cause’ where she takes up painting projects from various people and organisations professionally and saves up her earnings in order to paint for different social causes. She then started striking up collaborations with many organisations like Don Bosco Balprafuta ,Garbage Busters, and the railway stations that helped her with permissions and paints, by simply knocking down their doors and laying her heart bare.

“I would just barge into the station managers’ offices, share my concept, and most of the times, they’d be supportive as my paintings would also beautify the most visible parts of the station,” she explains.Some also shelled out parts of their salary to contribute to her work.

The conversations between the Jaduman and the common man

“All the people that pass by...they laugh but they also learn from him,” she says.

“Whenever I painted this, the happiest and most amazed were the station cleaners and sweepers who approached me and told me how grateful they felt that I understand them. They tell me, ‘Yeh mujhe kabse kehna tha sabko, par main roz khudko hi bolti rehti gayi ki kitni baar jhaadu maaru...Aur aaj aapne sab ko bataya,’” she says. (I wanted to say this to everyone for so long but always ended up just whispering to myself, about how long I must continue sweeping. Today, you have truly told everyone what I wanted to say.)

After the first few projects unknown railway passengers communicated to her that they had used the dustbin after reading the message. Apart from that, many cleaners would come forward to take selfies and exclaim how ecstatic they were to have a character dedicated to them; for the first time, they felt important and respected.

Her format is to travel across India to reach out to as many people as possible. Staying true to that model, she wants to paint her Jaduman at as many railway stations as she possibly can.