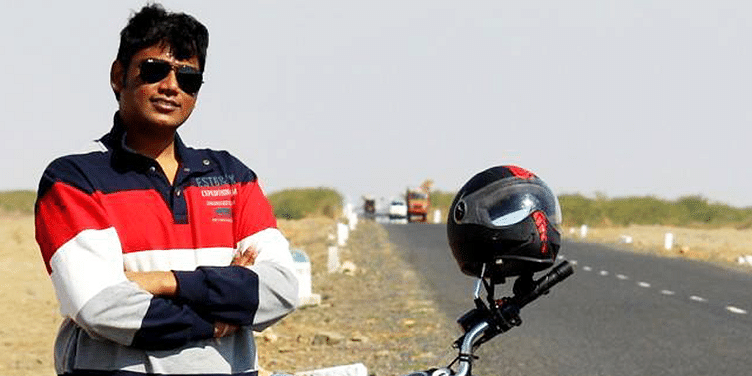 Graduating from IIT Guwahati in 2012, Vaibhav Chouhan was all set to give his CAT (Common Aptitude Test) and apply to management schools.

However, things didn’t work out quite the way he had planned. Not being able to procure the expected percentile got him thinking about the overall competitive testing environment in the country. This was in spite of all the mock tests guaranteeing him a better result.

Vaibhav pondered upon the need to build smarter algorithms to rate aspirants, so that every smart candidate is flagged and brilliance does not go unnoticed. He says,

The reason why GMAT and GRE scores are consistent with expectations is because these are adaptive tests, where the answer to a particular question decides the difficulty of the next question. So the algorithm starts segregating automatically, unlike the Indian system. Although some may argue otherwise, I think it is unfair to take the cream out based on easy or average questions. I think it is of the utmost importance that we come up with a smarter algorithm to rate aspirants for every exam.

This is where the foundational idea for Zigsaw Consultancy came from. The startup was founded in Udaipur in December of 2014.

But here’s the twist - the company works predominantly in Tier 2 cities, operating in Udaipur, Surat, Jaipur, Baroda and Chennai at present. Further, it is channeled towards startups.

Being a job portal, the system evaluates skills through self-evaluation, peer evaluation and expert evaluation, generating pre-evaluated profiles, which helps save time and effort for recruiters.

According to Vaibhav, everybody is a passive job seeker, constantly seeking better opportunities. But the main problem is the lack of information in the market.

And Zigsaw is filling that void through the building of online communities for job seekers and employers to communicate openly. The team has created Facebook groups like ‘Jobs in Indore’ and ‘Jobs in Jaipur’ from scratch, and these properties are growing at a rate of 500 members per day.

Vaibhav claims these groups to be holding a total of 40,000 members all together. Putting across metrics from NASSCOM, he comments,

Our prime focus is on the startup segment, as, according to NASSCOM estimates, 3,100 startups are present in India, the third largest base in the world. We are growing at over 800 startups setting up annually. It believes that there will be 11,500 startups employing over 250,000 people by 2020.

Bootstrapped, their job portal Zigzobs witnesses more than a hundred daily website visits and has already worked with more than 130 startups and SMEs across India, including the likes of Pagalguy.com, Grey Orange Robotics, Razorpay, Weddingplz, HRH Group, Miraj Group, Fizz, ZipHop and UrbanClap, among others.

The company also holds festivals for job and intern recruitment, having conducted three major events till date. The Udaipur job festival saw participation from nine companies, with the internship festival seeing participation from 32 companies and their Job Carnival offering 62 job openings in companies like Uber, Mahindra Finance and Exide Life.

However, the main revenue stream for the company remains the placements aspect. The firm charges anywhere from five to 15 percent of the placed candidate’s annual CTC as a one-time payment. The company’s clientele also avails of per month payment plans, with employers paying Zigsaw on a monthly basis.

Till date, Zigsaw has placed 100 people, excluding the direct connections that are made on their social media properties.

In the coming year, Zigsaw plans to disrupt the space through gamification. Taking a leaf out of the books of video games like Clash of Clans, the company plans to introduce interesting approaches to gamification and gratification to make the realm of hiring and referrals more interesting. Vaibhav says,

We are building a game around recruitment and are incentivising the whole system of sourcing applications through referrals.

Definitely not. Vaibhav says that finding a technical co-founder gave him his first startup blues.

Despite searching through existing portals, personal networks and every other possible avenue, Vaibhav was unsuccessful in finding a suitable co-founder. This served to further strengthen his case for starting something in the recruitment space. He, therefore, went ahead anyway.

But the most difficult part wasn’t finding a co-founder, but convincing people to take on a new experience when they have been using the traditional methods of recruitment for years.

There have been times when we have been shown out the door, not listened to and dismissed as bogus. But in the end, we have always prevailed, and taken the feedback from job seekers as our biggest strength.

According to the Labour Bureau, in the December quarter, there was actually a decline of 20,000 jobs across eight labour-intensive sectors. This was reportedly the slowest growth of jobs created since 2009.

In this backdrop, it is interesting to see a startup focusing on solving the job crisis in Tier 2 cities, which for the longest time seem to have been a neglected space for recruitment portals.