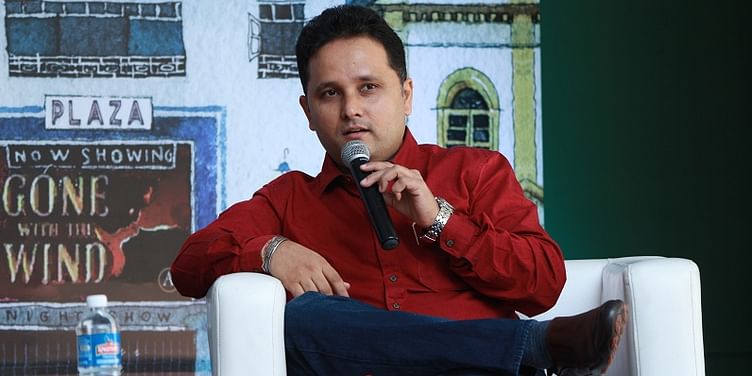 For any book fanatic, 42-year-old Amish Tripathi needs no introduction. The banker-turned-author has so far penned four books – three belonging to the highly acclaimed Shiva Trilogy. His latest release, Scion of Ikshvaku, became the fastest selling book of 2015. The Shiva Trilogy was the fastest selling book series in Indian publishing history. As I take a deep breath to begin my conversation with this ace bestseller, all I had on my mind was this – what is his story?

Born on October 18, 1974, Amish grew up in a spiritual household in Orissa and Tamil Nadu. His grandfather, a pandit at Benaras, introduced the young Amish to the world of mythology.

"Our dinner table conversations were always about historical characters, situations, and emotions in mythology,”

says Amish, as we savour the coffee at our table.

He later moved to Mumbai during his high school (is an alumnus of St. Xavier’s College), having graduated in Mathematics. Talking about his early days, he says,

"I grew up in a setup that was obsessed with education. Soon after my bachelor’s, I moved to Calcutta to pursue my MBA from IIM-C. I started my career as a banker and worked with Standard Chartered, DBS Bank, and IDBI Federal Life Insurance before venturing into writing."

History in the making

Amish’s upbringing was instrumental in inculcating a keen interest in him to rediscover mythology. In early 2004, he started penning his version of the Puranas, a task he carried on for the next five years. By 2010, his first book, The Immortals of Meluha, was ready. An excited Amish then knocked on the door of every publisher he could reach out to, only to realise the worst. None of the major publications was ready to publish his book. The author, who has today sold over 3.5 million books, when asked about that phase, says,

"After being rejected by over 20 publishers, I had stopped counting the doors on which to knock. Eventually, I published the book along with my agent. Fortunately, this book became the fastest selling in Indian publishing history. As writing is a high risk, high gain process, I do not blame the publishers for not choosing to back my work."

In early 2010, Amish's first mashup novel and the opening book of the Shiva Trilogy, The Immortals of Meluha, was published. The second book in the series, The Secret of the Nagas, was released in August 2011, followed by the third and final installment, titled The Oath of the Vayuputras, in February 2013. The trilogy is a fantasy re-imagining of the Indian deity Lord Shiva's life and adventures.

Amish already has another book scheduled to be released in 2017. One of the country’s largest production houses, Dharma Productions, had purchased the movie rights to The Immortals in early 2012.

His last release, Scion of Ikshvaku, has won itself the Crossword Book Award for Best Popular Book. Released in June 2015, it is the first book in the Ram Chandra series. Like the Shiva Trilogy, this is also a fantasy re-imagining of Indian mythology, this time centered on the epic Ramayana.

Together, Amish’s four books have sold over 3.5 million copies in the Indian Subcontinent since 2010, with gross retail sales of over Rs 100 crore.

Amish has earned himself a place in the Forbes list of ‘Top 100 celebrities in India’ for the fourth year in a row. When asked about how he deals with criticism, he shrugs, and says,

Criticism keeps my engine fueled, it helps you grow. I like receiving constructive feedback, and I do consider this an exercise to learn about myself. But I also believe that one should filter out every thought thrown at you. It is tricky to be at the receiving end. When you try to implement what everyone says, you are leading someone else’s life, and that’s unfair.

In the last half an hour of our conversation, I have heard Amish mention several times that he is a proud Indian and that he strongly believes in the varied culture and heritage the country has built. He says,

"I am driven by Indian history. The strong culture and historical backdrop it flaunts is a matter of pride. For me, my love for the country is non-negotiable,"

Amish is today not only a best-selling author but also a man who has built a legacy for himself from scratch. A strongly opinionated individual, he believes that marketing a book is as important as writing one. He says,

It is a fallacy that a good book sells by itself.

The writer works out of his Mumbai residence with around 12 staff members, each of them backing his dream. As someone who has used the digital media to advertise and leverage his works, with YouTube trailers and theater performances, only time will reveal what his next advertising trick is. Until then, let’s applaud a journey that is history in the making.