BengaluruITE.biz 2016 day 3 — highlights and wrap up 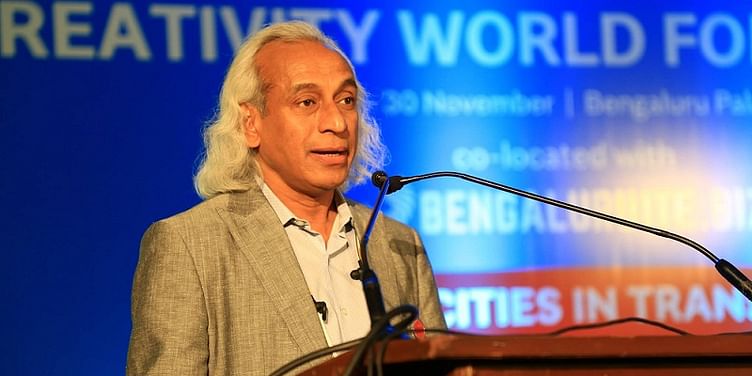 The Creativity World Forum (CWF) was started in Flanders, Belgium as a platform for showcasing entrepreneurial innovation. At the time of its inception in 2003, it consisted of the 10 most creative regions of the world. Although the list has now grown to 14, Karnataka — the only Indian state on the list — has been associated with the CWF from the very beginning. The 14 cities, regions, and countries from around the world the CWF now boasts of include Barcelona, Catalonia, Flanders, Oklahoma City, Ireland, Rio de Janeiro, and others.

Prof HP Khincha, who is also the Karnataka State Innovative Council Chairman, said for the past five years, Karnataka had been bidding to host the World Creativity Forum conference which happens in Flanders once every three years and the other years on rotation among member countries.

We are very happy that we got the chance this year and have made it a part of BengaluruITE.biz 2016. The theme for this year is ‘Cities in Transition’. There are eight verticals such as energy, environment, mobility, education, health, governance, technology, and social issues that are being discussed here.”

“The purpose is to let thought leaders speak. We can take all the good points from here. This is to enable us to think differently,” Khincha added.

The CWF is all about creative industries or how to create an ecosystem where the governance includes these. For example, from Karnataka, Channapatna toys, its industry, and how this culture could be included in our governance were closely studied. In another example, Guttenberg near Stuttgart in Germany has a flourishing music culture. This musical creativity needs to be turned into a business model and this culture should be part of governance.

“Governance is what I need as a service,” said Khincha, who was earlier with the Indian Institute of Science and also vice chancellor of Karnataka’s Visvesvaraya Technological University under which all engineering colleges in the state fall.

“Technology is an enabler and we need to take out the best practices. Tomorrow is all about computing power and communication,” he said.

Do not go after money

Of the many problems that Startup founders have two problems sit on the top of their mind; the first one is funding and the second one is how they could work with Corporates. Rishad Premji, Chief Strategy Officer, of Wipro Ltd, told young entrepeneurs that they would fund ideas which makes business sense for their business units. "Entrepreneurs should know what the corporate's business unit is doing, if they have to partner with them," says Rishad.

While Wipro had two units looking at partnerships, he believed for entrepreneurs to be successful they have to have humility, relevant experience and create the right product fit for corporate.

"Build something great and do not go after money. Money will come after you," says Rishad.

There have been many MoUs that have been signed by the Karnataka government at BengaluruITE.biz 2016.

The most successful among them is one with Japan where students will be identified and selected for skill development. After their training, they will be taken to Japan for employment.

Another MoU was signed with Taiwan, whose experience in establishing science parks will come in handy for the government.

An agreement on aerospace was signed with France after the Karnataka government notified the country’s first aerospace technology park in Belagavi. This will help garner more investment into the park.

On the very first day, an agreement was signed with Netherlands’ The Hague by Karsten Klein, Hague Deputy Mayor and IT, BT and S&T principal secretary Manjula. The MoU focuses on collaboration in the fields of technology for elderly care, genetic research, startups, and cyber security.

Priyank said as only seven percent of the graduates were employable, the government was paying special attention to make them and dropouts employable.

“A programme is being rolled out in a month’s time and the industry will also be involved,” he said without elaborating.

Four businesses of different moorings got together to talk about “What is next in Tech” on the third day of the BengaluruITE.biz organised by the Government of Karnataka. The founders of Axiom Research Labs, Big Basket, Capital Float and Practo spoke about how a technology is built around the business problem. They say that machine learning, artificial intelligence, algorithmic decision making and platforms to service consumers will become more commonplace thanks to smartphones, allowing businesses to enhance operations in manufacturing and retail environments.

“Repetitive tasks will become automated, and we have to prepare for that, leaving decision making to human beings. This is the future that we have to get used to,” says Naganand Doraswamy, founder of Idea Spring Capital.

“Today, our systems can tell you what is stocked, what is coming in and what is moving out, and where. All 25 cities that we have expanded to work on the same processes; there is no way that the system can fail,” says Hari Menon, co-founder of Big Basket.

Axiom Research Labs is building a spacecraft to go to the moon and a rover to survey its surface. "We are building a system for the space mission that requires many moving parts, and the challenge is to build it at a cost that is allocated to us," says Rahul Narayan, team lead at Axiom.

(Disclaimer - YourStory is a social media partner for BengaluruITE.biz.)