She lost both her legs, but gained an international career in volleyball 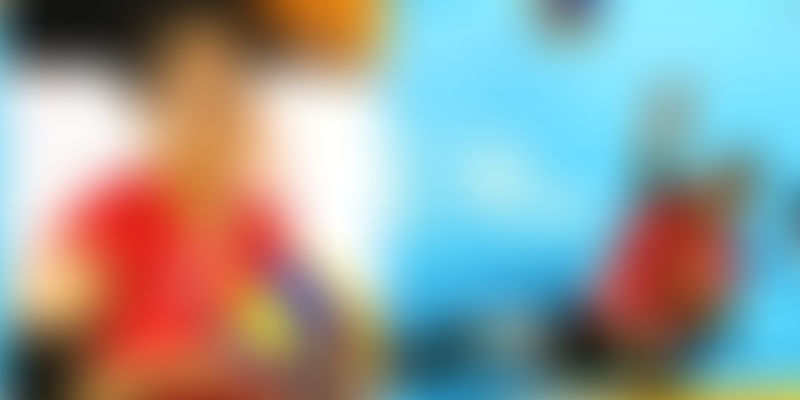 There are three true tests of the human spirit – one’s success in defining oneself not by where they came from, but where they’re going; one’s ability in knocking down a door that appears locked; and one’s willingness to not just achieve, but inspire and uplift others along with them.

Paraplegic sitting volleyball player Felicia Shafiq - vanquisher of a disease that claimed both her legs but in turn, showed her the full range of her insuperable character - has faced and aced all three. But the beauty of her story lies in how buoyantly she unshackled herself from the jaws of apparent despair.

36-year-old Felicia Shafiq spent the first 12 years of her life in Fiji. Some of her earliest memories include being the little helper to her mother who worked as a maid. “I remember my mom working very hard to make ends meet – but only had lots of love, hugs, and kisses, to give,” Felicia recalls.

Her mother soon progressed to being a clerk in a car dealership and repair shop, and then took the leap to move to the US in search of better opportunities. When Felicia was market-ready, she started out working as an IT consultant,and setting up networks at UC Berkeley. She bagged her first full time job at Cisco Systems, and later moved to Canada looking to explore new avenues.

During the pursuit, she crossed paths with SAP, which would change her life forever. Starting there as a Support Engineer in the Product Support group,she found friends like family in the course of her stint. And, it’s through SAP again that she would get introduced to something that would later become one of her favourite reasons to live‑ volleyball. And as her career progressed, so did her passion for the sport.

In February 2011, Felicia got sick from pneumococcal pneumonia and streptococcus, which led to blood poisoning and septic shock, and she had to be put on life support. Her mother was asked to prepare for the funeral, because the doctors had given up hope.The doctors were not able to determine the cause for her illness. “She sat down to talk to me potentially for the last time. I was in a coma, but she told me that she loved me, and that if I was in pain, it was ok to let go. And if it was possible to talk to God one last time, to tell him that my mom would be very sad and very lonely and if possible, to send me back. While I don’t remember my conversation with God, I know some miracle transpired, and I was able to defeat it and come out alive,” she recalls, of that agonising yet incredible period.

The doctors had asked Felicia’s loved ones to anticipate brain damage due to the illness and coma. However,when Felicia woke up, she asked what day it was, and quickly and duly wished her best friend happy birthday. The room erupted in cheers and high fives, but more news about her condition was to come. She was alive, but both her hands and feet were bandaged. “My first question was what happened and why my limbs were wrapped. And my second - when I could go back to work. I faced many challenges, so many that I could write a book about them alone,” she states.

She didn’t need to build an alternate career, because her managers told her that her job was secure, and all that was needed of her was to focus on her recovery. But a blind spot remained in the story – volleyball. “I was completely heart broken by the fact that I wouldn’t be able to play again. I couldn’t even watch it on TV,” she says.

Grappling with her new reality of being differentlyabled, figuring out how to get out of her dark days was a momentous task. “I allowed myself to feel the bad days, but I kept reminding myself that I chose to be happy. I used the network of friends and family I had and leaned on them for support and help when I needed it,” she says. Her family also had a tendency to do everything for her, but Felicia was adamant on doing things on her own, independently, to be self-reliant.

After almost four years of surgery, rehab,and recuperation, she returned to work - something she considers one of her greatest milestones. “It meant that I was ok to drive, to spend eight hours at work, and to become a valuable and independent member of society again,” she explains.

SAP ensured that she was comfortable and fit to work, and worked on a gradual return to work programme. An ergonomic assessment was done to ensure that she would be comfortable performing her duties.“No one treated me any differently. Any perceptions I thought there would be, I had actually placed them on myself. Everyone held me to the same standard as before. After I got over my own issues about showing my legs and getting back to the gym, people actually came up to me to tell me that my strength and spirit to get healthy again inspired them to do the same,” she says.

Meanwhile, sitting volleyball as a sport came up a couple of times in conversations with her physiotherapist and friends. “But, I never gave it any thought because I couldn’t handle the idea of touching another volleyball,” she says.

It was through her physiotherapist Linda that she learned about the national team doing a demo, and potentially seeking players. “I discussed this with a friend who literally ordered me to suck it up and do it, and told me how he pictured me accepting a medal on a podium someday,” she says.

That vision resonated with her, and she listened to him, let go of her fear, tried it, and loved it immediately.

Rekindling love for an old flame

According to Felicia, sitting volleyball challenges you as a player in every aspect. “I didn’t know exactly what was involved, but after the first day, I was hooked. Every part of my body hurt after that first day, but being active and healthy was one of my goals, and I knew sitting volleyball would help me achieve that,” she describes.

She worked with a local volleyball coach, and was soon being flown out to Edmonton to train with the team once a month. She uses the gym at SAP, and does a lot of cardio and core and weight training.

As a team,they have competed in Toronto at the Para Pan American games where they won bronze that qualified them for Rio. They went on to compete in Germany, UK, China, and now Brazil. “The great thing is that the girls have similar abilities as myself, so it’s great to talk about the challenges they encounter and the issues they have had to overcome. It’s great to learn from each other, and they have been super helpful in helping me learn the sport and get better at it. I could go on about them for ages, I love them,” she says, of the powerful sisterhood they share.

She also began working as a coach and a mentor to new hires and interns at SAP, and in the process realised that she would like to pursue a role in leadership. So, she started preparing herself to that effect, and as of last week, was able to accomplish that goal and is now a manager.

She is also a peer visitor, participates in support groups, and now teaches differently abled kids sitting volleyball, all of which gives her immense joy.

Acceptance, she says, is liberating. “Through my experience, I did a lot of self-reflection, and I’d like to think I have a better understanding of the kind of person I am. Learn to ask and accept help. We all need it, but it’s very difficult to let go of your ego. It took me a while to accept my situation, but once I did, I was able to move forward.”

And once you decide to be happy, she says the universe somehow conspires to make it happen.