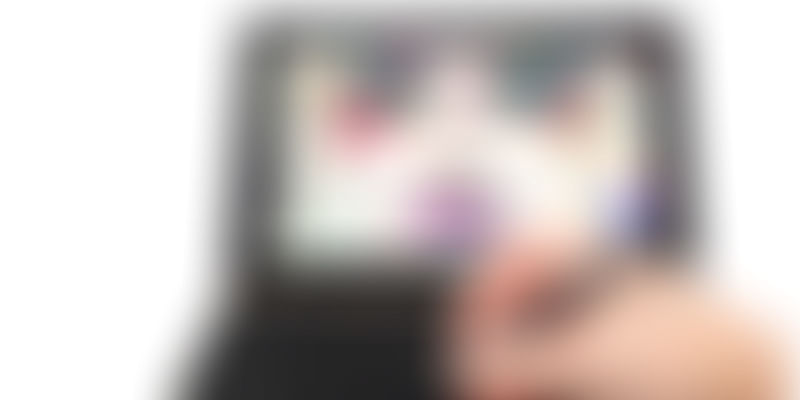 I waited for a whole year to get my hands on this machine. Launched at IFA Berlin 2016, Lenovo's Yoga Book was one of the most innovative gadgets shown off. Now, when IFA Berlin 2017 is around the corner, the Yoga Book finally comes to India at a reasonable price of Rs 49,990.

The Yoga Book is a unique combination of a notebook, a tablet, and a drawing or writing pad. It even comes with pen and paper, both of which can be used with the device. I was curious to know how it would feel to actually use the Yoga Book for real.

It turned out rather differently than I imagined.

The Yoga Book is a thin and light gunmetal finish machine. It looks serious, professional, and minimalistic in its design. Ease back the lid and you wouldn't be blamed for wondering what this was as one side is definitely a regular display, and the other is blank. Turn on the gadget and you'll see it the space light up with a virtual keyboard. It's really cool and attractive looking ‑ except that it's a little difficult to type on. If you don't input a lot of text or type, you can look down and peck at the keys fast enough. But this is a flat surface and there are no physical keys clicking and pushing down and back up against your fingers. Like typing on glass, it's not easy though many may get used to it, at least for short bursts of typing. I can have a full-fledged conversation with someone while my fingers fly accurately over a regular keyboard, so it didn't work too well for me.

But well, there are other ways of inputting text on the Yoga Book. The keyboard area, the Creator Pad, can turn into a writing or drawing surface. And the pen that comes with the 'multimode' machine, can turn into a ballpoint. You place a piece of paper on the surface and fire up the right apps, and go ahead and doodle, write, draw, and design. The result appears on your paper as well as on the display. Great fun, if your work or hobbies call for it.

The two segments of the Yoga Book are held together by a now famous hinge, which is strong and smooth enough to allow the screen to be pushed back 360 degrees. This means a lot of positions along the way, including a tent position to watch movies or browse. The screen is a touch-enabled one and what I found while tapping something on it while in a traditional notebook position, is that it pushes back a little. So, the flexibility is at price, though not a very big one.

There are Android and Windows variants of the Yoga Book but sadly, only the Windows version seems to be available in India. Reviewers around the world seem to have preferred the Android, though this may well be because they're so used to dealing with Android phones.

The Yoga Book comes with an Intel Atom processor, 64GB of space (yes, only) and a memory card slot, 4GB RAM, and a battery that lasts about eight hours. For its innovation, the asking price of Rs 49,990 isn't that much. Remember it also comes with a unique stylus, one that doubles up as a regular pen. It also has a notepad that fits magnetically on the create space with regular paper - although you'll have to buy more if you want an exact replica. I see this machine as fitting a certain requirement for creative people or those who handwrite and doodle a great deal. If one has cash to spare, it could be a second device, but it's not be put in the same category as say, an iPad plus keyboard as the experiences are very different.